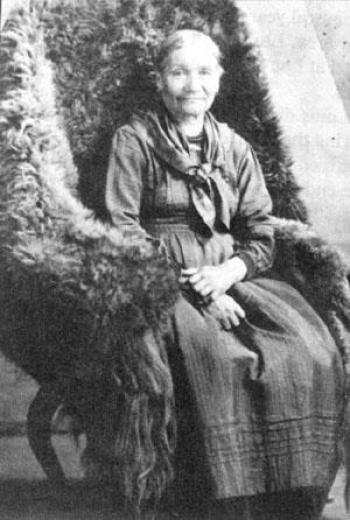 Footprints: Visit with the people who have come before. All have left us something from their journey. #Canada150

When Victoria Belcourt was born in Lac Ste. Anne on Nov. 19, 1861, the formation of Canada as a country was still almost six years away. Her home community and the territory surrounding it was under the control of the Hudson's Bay Company (HBC) and wouldn't become part of the new country of Canada until 1869, when the HBC would sell Rupert's Land to the federal government.

Victoria spent her entire life living in the Lac Ste. Anne area-a life that spanned more than a century. She was five years old when Canada was formed. She was almost 44 when Alberta became a province. She was alive when the first treaties were signed in Western Canada and was there to witness first-hand the decimation of the buffalo herds that had once been the mainstay of her people.

Victoria's father, Alexis Belcourt, was French; her mother, Nancy Rowand, was Métis. Her father supported the family by farming, hunting and trapping, and occasionally did some freighting. Her mother was a medicine woman, and shared her knowledge of healing plants with her daughter.

Victoria was 13 years old when she joined the buffalo hunt for the first time. The families going on the hunt left Lac Ste. Anne in the spring after fields had been sowed and gardens planted.

Victoria travelled with her mother during the hunt. As a medicine woman, it would be her mother's job to care for the men thrown from their horses while chasing down the buffalo.

The people from Lac Ste. Anne would set out for the hunt first, joined along the way by Métis from St. Albert. By the time they arrived at the hunting grounds, about 100 families would be assembled, Victoria said in her recollections of those days long gone.

She described the buffalo herd as a "dark solid moving mass."

"We, of those days, never could believe the buffalo would ever be killed off, for there were thousands and thousands," she recalled.

While the Cree and Blackfoot still used bows and arrows, the Métis used guns for the hunt, she said. When a buffalo was killed, the women would go and bring the meat in, while the girls worked to keep the fires going, creating smoke to keep the flies away as the meat was hung.

Before the trip home, the dried meat would be pounded into a pulp and mixed with sun-dried Saskatoon berries and grease to make pemmican, then sewn up in buffalo robes to help preserve it. Another hunt would take place in the fall.

When she was 17, Victoria married Louis Callihoo, a young Métis man who grew up in the area. Together they had 12 children, six sons and six daughters.

After Louis died of cancer in 1926, Victoria continued to live in the family home, with numerous family members and friends around to ensure she was never lonely or had to do without. She continued to live on her own until she was 101. She moved in with one of her daughters for a time, then spent her last days in the Youville Home in St. Albert.

In her later years, Victoria decided her wealth of memories and experiences should be preserved for future generations, and she took on the role of Métis historian. She is credited with writing a number of articles for the Alberta Historical Review, chronicling her life as a young Métis woman on the Prairies in the 1800s, as well as relaying stories of even earlier times shared with her by others.

In the Autumn 1953 edition of the Review, Victoria shared with readers her memories of what life was life in Lac Ste. Anne and St. Albert in the 1870s. She told of how spruce logs were used to build homes, with dried bark for shingles and rawhide in place of glass for the windows.

Open fire-places, called mud stoves because they were made of a mixture of mud and hay, were used for cooking, with high chimneys to ensure any sparks flying out wouldn't land on the roof and catch the house on fire.

Houses, she recalled, had no tables, no chairs and no beds. People sat on the floor to eat, and slept on the floor as well, folding up the bedding each morning and putting it away in a corner.

There was no flour available, Victoria recalled, so the people would grow barley and fry up the dried grains to use as a bread substitute. Unhulled barley, blackened in a frying pan, was also used as a substitute for coffee, she explained.

When the buffalo were gone, the people turned to other animals to fill the void. They hunted moose, deer and bear and used nets woven from thread purchased from the HBC to catch fish. Moose hide replaced buffalo hide for making moccasins and clothing, but neither moose nor dear hide could replace buffalo for the making of robes.

"The hair came off too easily," she recalled.

The Métis made their clothing out of cloth purchased at the HBC store. Purchases from the HBC store were done through barter, Victoria explained. The purchases would be done on credit, and then the debt was settled when the trappers would bring in their furs. Usually the furs were worth more than the debt, and the trapper would have a credit at the store.

"As there was no money, this transaction was called 'fur.' So much fur for this, and so much fur for this other article," Victoria explained. "Later on, when the Indian commissioners came to pay treaty money (in the late 70s), money began to circulate. It seemed more confusing to deal in money when one was accustomed to barter. I have heard of some Indians trading a used $5 bill for a brand new $1 bill."

In a later installment, written in 1948 but published in 1959, Victoria shared a story told to her by her husband Louis and his father, Batiste, about the arrival of their family in Alberta about 125 years before. Callihoo, Batiste's father, had been one of the first Iroquois to come west from Quebec, a voyageur for the HBC.

She had many such memories and stories to share. She counted Father Lacombe, who came to the area and set up a mission in St. Albert the year she was born, as one of her good friends. And she recalled the location where the family used to put up their tipi; the spot is now home to the Hotel MacDonald in downtown Edmonton.

Victoria remained healthy and active for most of her long life. At the age of 74, she took part in a Red River Jig competition in Edmonton and won handily, claiming the top prize of a buffalo robe. When she turned 100 in 1962, Victoria's friends and family members threw her a birthday party and she celebrated again by doing the Red River Jig.

She died April 21, 1966 at the age of 104, leaving behind two legacies. The first was the many descendants that included, at the time of her death, 57 grandchildren, 165 great-grandchildren and eight great-great grandchildren. The second was the memories she took time to record. They paint a vibrant picture of the life lived in Western Canada all those years ago.