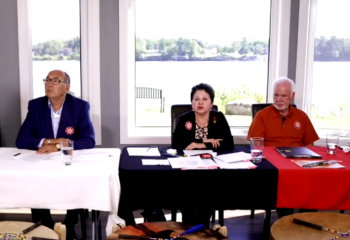 “This organization is survivors-oriented. It has survivor perspective. It is survivor led. It is a collective voice as a people.” —Claudette Commanda, CEO of the McLean Day Schools Settlement Corporation
By Shari Narine
Local Journalism Initiative Reporter
Windspeaker.com

Directors of the McLean Day Schools Settlement Corporation gathered Aug. 19 at the Gitpo Spirit Lodge on the banks of the Miramichi River on Eel Ground First Nation in New Brunswick to launch the $200 million Legacy Fund.

It was an emotional ceremony that underscored the importance of culture, language and mental supports and marked two years since the McLean Day Schools Settlement was approved by the court.

“(It was) a milestone in pursuit of justice for day school survivors and today is another milestone, a point in time for survivors and their families,” said Claudette Commanda, CEO of the corporation.

Day school survivors and their families will now have a say in how the money that comprises the Legacy Fund will be spent. However, it is focused in four areas of support: healing and wellness; culture and language promotion; commemoration; and truth telling.

“(It’s) very important that the truth will be told and that our survivors and their families will have that opportunity in the most respectful and safe space to tell their truths. And we must listen to the truths, respect the truths,” said Commanda.

Roger Augustine, another board director, pointed to the Gitpo Spirit Lodge as a safe place for telling truths and for healing.

“With the Gitpo Spirit Lodge (this is) to replace the harm the Indian day schools have done,” said Augustine, who said some of the Legacy Fund money could go towards building similar lodges in other communities.

Commanda and Augustine, both appointed by the court as representative plaintiffs for the survivor class in the court action, were also appointed by the late Garry McLean to the inaugural board of directors for the corporation. McLean is who the settlement is named after.

The pair is joined by retired judge James Igloliorte, who was involved in residential schools, days schools and Sixties Scoop court action.

Igloliorte said three more members are needed to fill out the board. A 12-member advisory panel is also to be formed.

“This organization is survivors-oriented. It has survivor perspective. It is survivor led. It is a collective voice as a people. Resilient, strong, determined to bring healing, hope and wellness to our children in the same way that our ancestors had for us to come and live here upon Mother Earth,” said Commanda.

Engagement sessions are to get underway in late September beginning in Atlantic Canada. Sessions will be held throughout Canada until the end of November. Day school survivors and their families can participate through virtual outreach sessions, online, email, or mail. A series of guided questions will help the process along.

The corporation while impact First Nations and Inuit day school survivors and families from every province and territory except Newfoundland.

“The outreach engagement process is needed to help the board of McLean Day Schools Settlement Corporation to design a framework for the implementation of the Legacy Fund that directly supports survivors, their families and communities. We will use all input received to shape the parameters of the Legacy Fund and the future of this organization,” said Commanda.

The board of directors were joined virtually by McLean’s daughter Kristen McLean, and Mariette Lucille Buckshot, who was named representative plaintiff for the family class in the settlement.

Buckshot recalled, in tears, how her late father attended two different day schools and passed away in June 2020 before he could receive his settlement cheque. She championed the work that lay ahead for the corporation.

“It is our time to tell our truths, our stories and traumas. Time to teach the truths of how we were casted as savages that needed to be tamed and colonized in ways that were inhumane. It’s time we show our resilience and strengths, to stand above all the wrongs that were done to us and show the world we still exist and continue to be heard and seen. It is time to reclaim our languages, cultures and traditions for our future generations,” said Buckshot.

The Legacy Fund and the McLean Day Schools Settlement Corporation are separate from the settlement payments that claimants can apply for until July 13, 2022, although a six-month extension may be granted upon request.

An out-of-court settlement took effect Jan. 13, 2020. Payments have begun to be issued and claims are being processed on a rolling basis. Payments range from the basic $10,000 to additional compensation for further incidents of physical and sexual abuse, with amounts ranging from $50,000 to $200,000, based on the severity of the abuses suffered.