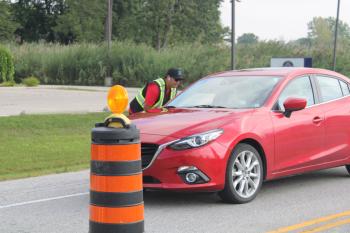 A security guard speaks with a motorist entering Bkejwanong Territory (Walpole Island First Nation) on Aug. 17. Visitors are being screened at the entrance to this southwestern Ontario community after a recent spate of drug overdoses and deaths. Photo by Colin Graf.

“We cannot begin to address this problem without acknowledging that this is a spiritual impasse that is at the core of our community at this time. Healing must take place across our community.” — Burton Kewayosh
By Colin Graf
Local Journalism Initiative Reporter
Windspeaker.com

Visitors are being met by security guards at the bridge entrance to Walpole Island First Nation in southwestern Ontario. The measure is being taken in response to a surge of recent drug overdoses and deaths.

The checkpoint has been in operation since Aug. 7 due to the drug problems, said Chief Charles Sampson. “EMS has just been flying over the bridge” (from the Ontario mainland) during the summer, he says.

“Our goal is to deter the illicit drug trafficking onto the reserve and, more importantly, to close the drug houses down within our territory,” said Sampson.

Chief and council declared a second state of emergency in mid-July as the community, located at the mouth of the St. Clair River between Windsor and Sarnia, has been “grappling with a drug pandemic that has affected communities across Canada,” said acting Chief Burton Kewayosh at that time.

“We have seen the evidence of harmful drug addictions and the deterioration of mental health across our community, and the COVID-19 pandemic has accelerated this trend.”

Walpole, also known as Bkejwanong, was under a first state of emergency due to the pandemic.

Since the checkpoint was established, visitors have been asked why they are visiting the island and some have been turned away who don’t have “valid reasons” to be on the island, said Sampson, but he doesn’t know exactly how many.

Valid reasons include quick retail visits to gas stations, tobacco or cannabis shops, craft stores, restaurants, and a public health clinic where COVID-19 vaccinations are being given, he explained.

Things have gone smoothly so far at the checkpoint, Sampson said, but “there are always people who don’t like to have restrictions placed on them.”

Visitors are being asked to provide identification and state the purpose of their trip, according to a news release. Access to beaches, marshes, parks and dump is reserved for community members only. Failure to comply will result in charges and fines, according to a more recent news release.

The checkpoint was authorized by council after concerns were raised by community members about overdoses and “a couple of deaths” associated with the use of fentanyl, Sampson said.

Organized crime groups trafficking hard drugs have “targeted” First Nations, identifying them as “very soft targets” because of “our inability to effectively patrol and police our large territory,” he explained.

The chief says the drug problems show the need to beef up Walpole Island’s police force. Bkejwanaong officials are just restarting negotiations with the federal and provincial governments about the number of officers needed on the island. He wants to see the police complement tripled.

Sampson also wants to put police on the waterways surrounding the territory, which is circled and crossed by several rivers and channels at the delta of the St. Clair River.

“We have a lot of coastal area that is not protected,” Sampson says. The need for a police boat goes beyond drugs, as the First Nation needs to enforce bylaws requiring fishing and hunting licenses, and permits for pleasure craft to operate in local waters, he said.

“We have a great need to do a lot of expansion” of the police force.

The new checkpoint is manned by contracted security staff, but island staff are “working on an arrangement” to also have a police officer present around the clock in case of need, the chief adds. He hasn’t heard of any problems so far that have needed police.

Residents have shown some division about the added security, and the need for the checkpoint will be re-evaluated at the end of a month based on effectiveness, cost, and the community’s “tolerance for this activity.”

Comments he has heard and read run both ways.  Some of the community are in favour “and are providing advice on how it could be better run”, while others say the checkpoint is “completely unnecessary and we should take direct action to focus our resources on taking direct action to close the drug houses.”

Bkejwanong community member Rebecca Blackbird says the checkpoints were set up after a community fire was held in a park across from the council chambers to encourage the chief and council to “to help save the lives of our people,” she tells Windspeaker.com on her way into the band office to discuss the situation with the chief.

Blackbird feels the checkpoints are accomplishing what they set out to. She says prior to the community fire there had been five drug-related deaths “within weeks” at Walpole, and that legitimate visitors should not be deterred from coming. “If you are not involved in (the drug trade), you have no worries or no troubles passing or coming through the community,” she says.

The new emergency declaration will also help mobilize internal and external resources in the areas of mental health and community wellness supports.

“Steps will be taken to ensure that wellness supports are in place that members can access who are struggling with mental health issues and addiction,” according to the July release.

While the short-term plan is to focus on the supply of illicit drugs and to support those with addictions, the long-term plan will focus on quality of life for youth and access to health and recreational opportunities, which will include sports, land-based learning, and cultural programs.

The mental health problems the pandemic brought to Walpole Island are “compounded with traumas triggered by the uncovering of mass graves at residential schools,” said Kewayosh.

“We cannot begin to address this problem without acknowledging that this is a spiritual impasse that is at the core of our community at this time. Healing must take place across our community.”