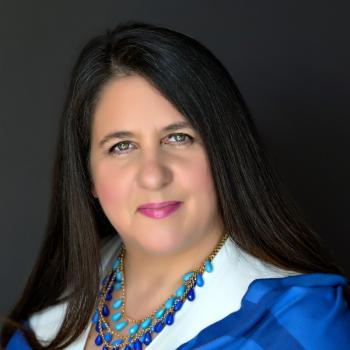 Lynne Groulx, CEO of the Native Women’s Association of Canada

“We feel very strongly that there’s a moment in time that has come about … and hopefully we’ll see some transformational change.” — Lynne Groulx, CEO of the Native Women’s Association of Canada
By Shari Narine
Local Journalism Initiative Reporter
Windspeaker.com

Getting Indigenous women and gender-diverse people out to vote in the upcoming federal election is about both the past and the future, says Lynne Groulx.

“We've waited for a long time and now I think the timing is right,” said the CEO of the Native Women’s Association of Canada (NWAC). “If we don't do something now then we're leaving it for the next generation to deal with it.”

NWAC has kicked off an aggressive campaign aimed at getting out the vote of Indigenous women and gender-diverse people. It's entitled, “We’re done asking, we’re voting”, and has the hashtag #DoneAsking.

Groulx points to such reports from the Royal Commission on Aboriginal Peoples (1996), the Truth and Reconciliation Commission on the legacy of Indian residential schools (2015), the National Inquiry on Missing and Murdered Indigenous Women and Girls (MMIWG) (2019) and “report upon report at the United Nations and what’s really changing? Not that much.”

“We should be done asking and we should be voting because we need to influence the results of the election and maybe when we do that then maybe the politicians will ensure that their policies and their legislation really takes us into account,” said Groulx. “We as a group and a collective can actually impact the results.”

There is a history of exclusion that Indigenous women and gender-diverse people are battling, both in policies that didn’t allow Indigenous women to vote and colonization that made them a marginalized population, believing their voices weren’t important enough to be heard.

This year, Groulx points out, women face more barriers from the fear of the coronavirus pandemic and the “psychological distress” that has come from the uncovering of burial sites on residential school grounds.

To help those who have never voted before, NWAC has produced a 23-page voting guide. Written in plain language and detailed, it covers a wide variety of topics from the identification needed to vote; how to register to vote; options for voting; solutions to possible barriers; and how to decide who to vote for.

To allow for informed voting, NWAC is doing a comparative chart on the platforms of the five main parties: Liberals, Conservatives, New Democrats (NDP), Greens and Bloc Québécois. NWAC has also sent a questionnaire to the parties for response to their “wish list.” All results will be available on NWAC’s website. The organization is also hosting a “robust social media campaign” which will include daily commentary on news and issues.

At this point, says Groulx, NDP leader Jagmeet Singh has paid “much attention in trying to look at the human rights issues for Indigenous people,” while the Conservatives have been a “bit disappointing.”

As for the Liberals, Groulx said, “we’ve had some movement, some progress on some things, yet for Indigenous women, the progress has been slow.”

She notes the handful of times that the federal Liberals have excluded NWAC from “the decision-making table” when discussions are happening on Indigenous issues, because a framework has been created where “we’re still struggling to have our voices heard in the same way as the male-dominated groups have their voices heard.”

She also points to the final report on MMIWG and the lack of action from the Trudeau government.

Groulx wants issues that pertain to Indigenous women – such as housing, education, employment, violence, safe drinking water, environment – to make it on the agendas of the campaigning politicians.

She says these basic Indigenous issues are central to Indigenous women because “women are the heart of the family. We’re the ones caring for the children. We’re the water carriers.”

In the upcoming English language leaders debate on Sept. 10, Groulx says NWAC will be lobbying to have at least the MMIWG issue included as a topic.

As important as the issue of MMIWG is, Groulx says that Indigenous women and gender-diverse people need to understand that they are more than the high levels of murder, trafficking, abuse, poverty, displacement, and mental illness that they face.

Groulx is hopeful that Indigenous women will be influenced by the prominence of other Indigenous women, such as newly-appointed Governor General Inuk woman Mary Simon and newly-elected Assembly of First Nations National Chief RoseAnne Archibald.

“We feel very strongly that there’s a moment in time that has come about … and hopefully we’ll see some transformational change,” said Groulx.

The virtual workshops on key election issues can be accessed at https://www.facebook.com/NWAC.AFAC

The federal election takes place on Sept. 20 although voting can be done at advance polls.