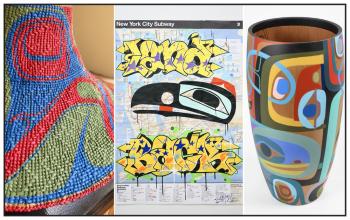 Some of the work on display in the “True to Place: stímetstexw tel xéltel” exhibit at the Bill Reid Gallery. From left to right: Hat by Robert Davidson; Raven Who Kept Walking by Corey Bulpitt; and A Time For Love Vessel by Steve Smith.

“As we got started on the theme and selecting artists, we started to realize language emerged as a subtheme as well. Because once you start talking about place-based stories and history in Indigenous cultures, naturally language, where it is still alive and still practised, couples with those stories and those themes.” — Xémontalót Carrielynn Victor, guest curator of the exhibit True to Place: stímetstexw tel xéltel”
By Rebecca Medel
Local Journalism Initiative Reporter
Windspeaker.com

The largest collection of paintings ever exhibited at the Bill Reid Gallery of Northwest Coast Art will be on display in Vancouver from June 15 until March 19, 2023.

Artist and muralist Xémontalót Carrielynn Victor (Stó:lō) is the guest curator for this exhibit. As she began her work with the Reid to discuss what the subthemes of the exhibit should be, she said a few ideas came to her. The strongest was “True to Place”. Similar to the phrase “rooted in place”, which she said refers to the concept of place-based storytelling.

“It’s a very ancient and important practice among people to share the stories of their place orally, and now through visual art, and to teach, not only the ones who are from this place but the guests who have come here, about its history. How were the mountains formed? How did the sturgeon come to be?” Victor said, giving examples.

This led Victor to start looking for artists who practised place-based storytelling within their work. The 10 chosen include local Coast Salish artists, but also neighbours along the coast as far as Alaska.

“As we got started on the theme and selecting artists, we started to realize language emerged as a subtheme as well,” Victor said. “Because once you start talking about place-based stories and history in Indigenous cultures, naturally language, where it is still alive and still practised, couples with those stories and those themes.”

Artist and language keeper Thomas Jones was brought on board at this point to help create the exhibition’s subtitle “stímetstexw tel xéltel”, which is taken from the Upriver Stahlo Halq’emeylemqel dialect. It means “Keeping the pencil moving forward” and is significant to the exhibit’s contemporary style and the theme of moving forward from a place of history and tradition.

“In conversation with Thomas, he said ‘oh, it sounds like you’re doing your best to use the tools of the day, and it’s like trying your best but by using your genuine good intent.

‘Tel’ references the tool. “xéltel” is a word that itself is older than the pencil, so it’s about marking, making your mark, or the tool used to mark things,” Victor said.

The word can be used in various contexts, but in this instance refers to a pen, a pencil, or a paintbrush.

While they remained focused on the pencil or the pen, the curators began building on the word for marking tool, which led to the last subtheme, something very dear to Victor’s heart. In her own work as a muralist, she has begun using an iPad and digital pencil to properly draft her designs on her device.

“What I found in starting to use digital design, in this form specifically, is that I’m using all the same gestures, I’m using all the same ways of thinking and it’s very much like painting. So, Beth Carter (curator at the Reid) and I started to look around at artists who are hand-drawing with a digital platform. And in every case the artists we had already selected were also showcasing digital work of a hand-drawn nature.”

Victor herself designed the title image for the exhibit—a red brushstroke—calling it both extremely simple but extremely meaningful as it’s an earth-based ochre mixed with a gel/acrylic medium and applied to a canvas with a paintbrush.

Events that the public can take part in will also be held throughout the year to give visitors a chance to try hands-on workshops. Details are still being sorted out.

Find more information about the exhibit at: https://mpmgarts.com/media/campaigns/bill-reid-gallery-true-to-place/