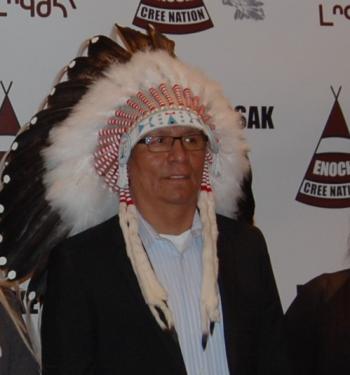 Resolutions passed by chiefs at recent Assembly of First Nations meetings may not be enough to get the federal government to step back from the development of a new implementation and recognition framework, so four First Nations have joined forces to take their concerns international.

The three Treaty 6 Nations and Tsuut’ina Nation from Treaty 7 territory, came together “because a lot of the work that’s going on (with the federal government) there hasn’t been enough consultation. That’s what we want,” said —Ermineskin Cree Nation Chief Craig Mackinaw.

Mackinaw spent the last two days in Gatineau, Que., participating in a national policy forum hosted by the AFN.

“A lot of the chiefs want to either reject the implementation or look at a different process based on us leading it,” he said.

Indigenous-Crown Relations Minister Carolyn Bennett, who presented at the forum, came under fire for her government’s approach to changing the relationship. Despite words like “only First Nations can determine the path for decolonization and reconciliation,” chiefs are saying that the government is pushing its own agenda.

“Out of respect for treaties and the vision of our ancestors, we are willing to work in partnership, but First Nations will not accept a prescriptive and rushed process that doesn’t respect self-determination or the duty to consult,” said AFN National Chief Perry Bellegarde in a statement following the forum.

In July AFN chiefs passed the resolution First Nations Determination of the Path to Decolonization calling for the establishment of a First Nations-led process on the path to reconciliation and decolonization.

In that report CERD instructed Canada to employ a “transparent manner with the full involvement of the First Nations, Inuits, Metis and other Indigenous Peoples with their free, prior and informed consent for all manners concerning their land rights.” They also admonished the government for undertaking “costly legal challenges” instead of obtaining meaningful free, prior and informed consent.

Prior to the government’s announcement for the new framework agreement, there was no consultations on what process should be used.

He points out that the government is also dealing with Indigenous organizations, like the AFN, and these organizations are not rights holders and cannot make decisions on behalf of individual First Nations.

Mackinaw and his partners are asking for CERD to send representatives to Canada to “observe and monitor the federal government implementation of international standards” within the four First Nations. They are also asking for CERD to instruct the federal government to halt its “legislative process until such time as they engage in a process that recognizes the rights of free, prior and informed consent” of the people of the four First Nations.

According to CERD’s website, “Urgent procedures are to respond to problems requiring immediate attention to prevent or limit the scale or number of serious violations of the (UN’s International) Convention (on the Elimination of All Forms of Racial Discrimination). Criteria for initiating an urgent procedure could include, for example, the presence of a serious, massive or persistent pattern of racial discrimination; or a situation that is serious where there is a risk of further racial discrimination.”

Mackinaw says he isn’t sure when they will get a response from CERD.

He admits that delaying the work being undertaken by the federal government to implement a new framework may set First Nations back if the 2019 federal election results in a new government.

“It’s possible,” said Mackinaw. “But right now there’s a lot of discussions. We’ll see where it goes from here.”