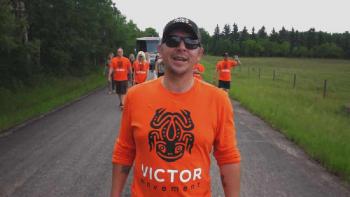 “Most incredible, amazing experience of my life. People were pulling up in their cars on the side of the road and getting out and telling us their stories and it was just unbelievable.” ~ Theo Fleury

It’s a subject that most people would rather sweep under the rug, and not deal with and not talk about it, but there are 10 million survivors of child sexual abuse in Canada; 100,000 million in the United States; and almost a billion people worldwide, said Theo Fleury in an interview with Dustin McGladrey on CFWE-FM.

Victor Walk doesn’t do that. “We put it right in your face,” Fleury said.

Victor Walk will premiere at Metro Cinema in Edmonton May 5, opening this year’s NorthwestFest, a film festival which shows new documentary features, short films, media arts, and more. It runs from May 5 to May 14 in various locations.

Victor Walk follows former NHL star Theo Fleury on a 10-day walk from Toronto to Ottawa to raise awareness around the subject of sexual abuse, rape and justice issues, including tougher sentences and getting more help for people who have had this experience.

It was after the release of Fleury’s first book, Playing with Fire, that the walk was envisioned. Playing with Fire documents the chronic sexual abuse Fleury suffered from Graham James, a junior hockey coach, and the Fleury’s resulting anger and abuse of drugs and booze.

It was then that he called some friends and began putting the walk together. Meanwhile, Michael Lynch had contact Fleury from Los Angeles to see if he could make the “Hollywood version of my book,” said Fleury.

Lynch flew to Calgary and sat down with Fleury and talked about it, but Fleury decided it was too soon.

“I just said, ‘I don’t think I’m ready to do this yet. I just came out with my own story and it’s been overwhelming and an incredible experience. There is more I need to do before we do this movie'.”

When the walk started to take shape, however, Fleury invited Lynch to document it. And Lynch, said he’d love to and became the director of Victor Walk.

“He basically walked the whole entire walk backwards with a little camera and a Go Pro,” Fleury said.

The walk comprised of 400 kms over 10 days. It was, said Fleury, the “most incredible, amazing experience of my life. People were pulling up in their cars on the side of the road and getting out and telling us their stories and it was just unbelievable.”

“This documentary, we have people on camera telling us their stories for the very first time they told anybody in their whole entire life. And that’s what makes this film incredibly powerful and inspirational and motivational. You know there’s lots of hope and we’re really excited to start to get this movie out, distributing it across the country in many places.”

Fleury said talking about the abuse is the greatest way to heal from this type of experience.

For the premiere on Friday night, Fleury has teamed up with Little Warriors, a group dedicated to helping protect children from sexual abuse. It also runs the Be Brave Ranch treatment centre which is devoted to long-term help for children who have been sexually abused.

Fleury will attend the premiere, hanging out with some Little Warriors, he said.

For more information about the festival and purchasing tickets go to http://northwestfest.ca/