Teacher shortage in Indigenous classrooms complicates back to school 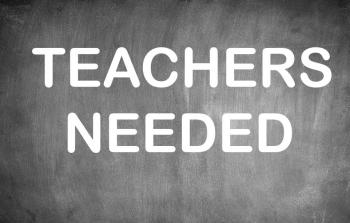 “It’s a buyers’ market for teachers right now so they have a choice.” —Superintendent Gord Atkinson

A “perfect storm” has left a number of schools that serve Indigenous children starting the new school year without all their teaching positions filled.

Alan Rollins, CEO for Kee Tas Kee Now Tribal Council (KTC), says a large number of retiring teachers and a favourable Supreme Court decision that forced the government of British Columbia to implement smaller class sizes and rehire its teachers has created a “perfect storm for a teacher shortage.”

“The final element is it’s always difficult to recruit teachers for remote areas. So you roll all three of those things together and you’ve now got a teacher shortage and it’s difficult to fill all the positions,” said Rollins.

First Nation school authorities also face the additional challenge of attracting teachers. They aren’t eligible to collect the benefits or get the services of the Alberta Teachers’ Association.

“The ATA does not allow for teachers employed in First Nation schools to become full ATA members. For some teachers this is a problem as it does affect the type of pension that they can earn,” said Rollins.

KTC Education Authority is looking for seven teachers. While the majority of positions were posted on the Education Canada website in mid-August, the latest was posted Sept. 2. KTC operates schools on Whitefish Lake, Woodland Cree, Loon River, Peerless Trout First Nations and the Lubicon Lake Band, all about 500 km north of Edmonton.

Late postings, said Rollins, are due to “an unfortunate reality in the education system that sometimes teachers back out at the 11th hour and nine times out of 10, it’s because they got what they felt to be a better offer from somewhere else.”

KTC has no incentives in place right now to attract new teachers, but that is in discussions, he says.

Rollins notes that school enrollment won’t be counted until the end of September. If student numbers are higher than anticipated, KTC could be short even more teachers.

KTC is not alone in needing more teachers. Northland School Division is looking for six-and-a-half teaching positions.  Five and a half of those positions are for the three schools it operates in Wabasca, about 350 km north of Edmonton. NSD services Indigenous communities primarily.

NSD Superintendent Gord Atkinson says he heard unofficially that teachers had been hired over the summer in Wabasca, but then turned down the positions because of high cost of accommodations.

While NSD offers a relocation allowance and is in the process of renovating rental units for teacher housing, the division does not subsidize rent. Atkinson says NSD would rather put that money into the classroom. However, he says, NSD is in “very preliminary” discussions with the government about getting provincial dollars for rent subsidy. NSD is already getting that subsidy for one community further north.

“It’s a struggle. Housing, the cost of living in the north is high,” he said. On top of that “it’s a buyers’ market for teachers right now so they have a choice.”

NSD usually has 20 to 25 new teachers hired each year, about 15 per cent of its teaching numbers.

NSD offers a number of incentives including mentorship for new teachers, professional development, and covering the full cost of the teachers’ benefits package.

Teachers who tendered late resignations were not released before the beginning of this school year. Atkinson says NSD enacted the 30-day grace period choosing to keep the teachers until the end of September.

“It’s not unusual to hold on to someone. If we can find somebody suitable to replace we’d let somebody go earlier, but it really puts a spin on the school year when there’s disruption. So we really try to minimize disruption for the students as much as possible,” he said.

Atkinson says he has “green-lighted” NSD’s associate superintendent of human resources to do what’s necessary to fill the teaching positions.

Some years, says Charity Alook, principal for the lower elementary, it is difficult to attract teachers.

“The good thing is we didn’t have a high turnover (in teachers) this year,” she said.

The call for six new teachers came because of increased student population. Last year, Oski Pasikoniwew Kamik added Grade 8 and this year it has added Grade 9. Its student population, drawing from both on and off reserve, has jumped by 100 each year.  The band-run school is an attractive option, says Alook, because of the holistic approach it takes, including a full-services team that includes occupational and speech therapists, and a behaviour consultant.  A Grades 6 to 9 hockey academy in the works has also been a drawing point. Enrollment now sits at 475.

As an incentive to attract the additional teachers, Bigstone Cree Nation covers the cost of one utility bill as well as a flat-rate moving allowance.

As of Sept. 12, the Education Canada website had eight other First Nations school divisions in northern Alberta looking for about a dozen more teachers, including Tallcree School Division in Fort Vermilion, which has posted three positions all in the latter part of August.

But teacher shortages for First Nation school divisions isn’t limited to the north. In the south, both the O’Chiese School Authority and Sunchild First Nation School are looking to fill teaching positions.

One of the two positions posted Sept. 5 has been filled, says Angie Goodrunning, director of education for Sunchild. The other position had been filled, but that teacher left over the summer. Goodrunning says no one has applied for that position as of yet.

Sunchild offers teacher housing on reserve as an incentive, with the monthly rent for a two-bedroom house set at $500.

A number of strategies have been employed by the schools to deal with the immediate lack of teachers. Class sizes have increased, specialist teachers have become classroom teachers and teaching assignments will be adjusted when the final enrollment figures are known.

“We need to have our own people being trained as teachers who are from the community. We’re too reliant on the outside world for school teachers,” he said.

About 20 per cent of KTC’s teachers are First Nations.

Rollins says KTC is looking to “get more assertive” with the universities in Alberta to start discussions on getting teacher-training programs based in the communities so more Indigenous people can get into the classrooms as qualified teachers.