Sufficient, predictable and sustained funding for First Nations within reach 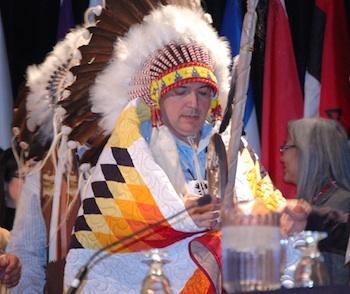 “I know how hard it is, after so many broken promises, not to be cynical, but we must not, we cannot fail at rebuilding a renewed relationship of respect and opportunity together.” ~ INAC Minister Carolyn Bennett.

A promise from Prime Minister Justin Trudeau last December, and a commitment in the federal budget in May to do away with the two per cent cap on funding for First Nations, was formalized Tuesday morning July 12 in a memorandum of understanding.

Bellegarde said the new fiscal framework will take into account “real” needs and total population, both on and off reserves.

Bennett referred to her government’s action to do away with the two per cent cap as “removing the irritants from previous years that poisoned the relationship and set back progress by a decade.”

Bennett said the budget passed by the Liberals in May is new money for education, infrastructure, housing, enhanced prevention in child welfare, and ending boil water advisories.

Bennett committed to building a nation-to-nation relationship and undertaking meaningful engagement, especially in the face of disagreements.

She stressed that the Liberals did not believe that litigation was the way to build relationships and her government would stay away from court action.

“How do we react when something goes wrong? …. (this) must be answered if we are truly on a path to nation-to-nation relationships and reconciliation,” she said.

Both Bennett and Bellegarde agreed that the time since the Liberal government came to power has been filled with accomplishments and both the government and the AFN have been moving forward on a steady path.

Both talked about the pre-inquiry work and upcoming national inquiry into murdered and missing Indigenous women; the full implementation of the United Nation Declaration on the Rights of Indigenous People; and the federal government’s commitment to implementing all 94 calls to action from the Truth and Reconciliation Commission.

“We have a new federal partner in Ottawa. A partner that has pledged to build a new relationship with us …. We can see the first steps to reset the relationship,” said Bellegarde.

But while he applauded the government for its commitment of $8.4 billion over five years to First Nations, Bellegarde said that, in keeping with the theme of the AGA, which is “Gaining Momentum,” the AFN would keep pushing.

“We say, ‘Was it enough? No.’ It’s not enough … to close the gap in terms of the quality of life,” said Bellegarde. “The budget was a significant first step and we’re going to continue to press on in all areas. Action is needed in all areas and we need to keep pushing for that action.”

“I know how hard it is, after so many broken promises, not to be cynical,” said Bennett. “But we must not, we cannot fail at rebuilding a renewed relationship of respect and opportunity together.”