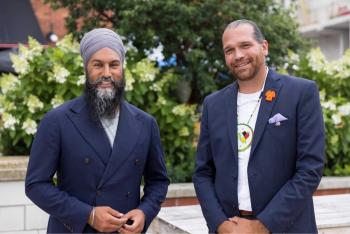 “I couldn’t stand outside any longer and complain about a system that I’m not ready to try and fix.” — Jason Henry
By Colin Graf
Local Journalism Initiative Reporter
Windspeaker.com

The Chief of the Chippewas of Kettle & Stony Point First Nation (KSP) is running as an NDP candidate in the federal election.

Jason Henry, a two-term chief and father of three, is the party’s candidate in the rural Lambton-Kent-Middlesex riding in southwestern Ontario.

Born and raised in KSP, Henry says he decided to run for the New Democrats after a chance meeting with leader Jagmeet Singh at the Ottawa airport in 2019.

While both men were waiting for flights they struck up a conversation about political matters.

“Here’s this guy in a hoodie and sweatpants; he’s genuine and down-to-earth,” recalls Henry. He told Singh he was “wondering” about political work beyond his community, and the two exchanged phone numbers.

“He seems chill and cool, but he could be running Canada one day,” Henry says.

One day in 2020, while driving with his family, his politically-savvy daughter saw Singh’s name appear on their truck’s Bluetooth screen with an incoming call and thought someone was pranking her father. It was the NDP leader though, asking if Henry would join the party and run as a candidate.

After a lot of thought Henry accepted.

“It’s easy to be a critic and point out all the things wrong with the system. I couldn’t stand outside any longer and complain about a system that I’m not ready to try and fix,” he told Windspeaker.com.

“I was really undecided, really committed to my work (as chief),” but after June 1 and the first discovery of the unmarked children’s graves at former residential school sites, Henry decided to throw his hat into the ring.

“Maybe a few of us have to make a change and go into that other (federal political) system and do good work and bring our voices,” he remembers telling another First Nation leader at the time.

There is an informal network of Indigenous candidates across Canada, Henry says. “There are a few of us and we are in touch.

“We’re not all from the same party, but that’s the nature of Canada.”

Kinew is “such an inspiration for young Indigenous people. He’s had his struggles the same as many of us have, but he very likely” could be the next premier of Manitoba.

Henry feels the NDP really has the interests of Indigenous people at heart, and he hopes to work on implementing the Calls to Action from the Truth and Reconciliation Commission's report “so Indigenous people can have truth and justice.”

The chief says the other people of his riding have a lot in common with the KSP community.

“There’s that attachment to the land,” and farmers and people out in the country are being treated much the same as Indigenous people. “We’re not being heard, not being represented.”

While the national agenda seems to be driven largely by urban concerns, “Canada has forgotten what it’s like to be grassroots,” to “work until the sun’s gone down,” whether out on the farm or “back in the bush” collecting maple syrup.

As for the campaign, he won’t be taking a confrontational approach. Others in the race are incumbant Lianne Rood, for the Conservative Party, Dr. Sudit Ranade, for the Liberal Party, Jeremy Hull for the Green Party, and Kevin Mitchell for the People’s Party of Canada.

Henry feels he is well-placed to succeed as an MP because of his ability to listen to what people need and take action to fill those needs. Henry says he believes in “fighting for those who haven’t been able to fight for themselves.” As one example he describes how he worked to include the LGBTQ2S community at KSP by bringing the Pride flag to the community’s powwow.

Another accomplishment he cites is the arrival of temporary, prefabricated homes at the former army camp at Stony Point, where KSP protester Dudley George was shot and killed by police in 1995. George and other activists were reclaiming the land, seized for an army camp during the Second World War and not returned.  His brother, sister, and others have been living in the old military barracks until the temporary homes were installed last winter, in advance of the construction of more permanent homes.

Henry says he “absolutely did not know what was best there, but the people told me exactly what they needed,” he explains.

“I may not be a rural farmer, but I can listen to people, I can understand heart-to-heart what they need and I can go and fight for it.”