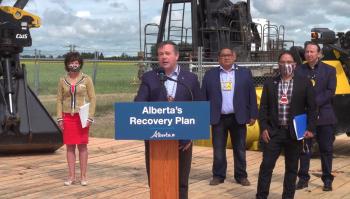 “There’s an issue in the past that was called ‘drainage.’ You could literally see where the reserve boundary is by the number of pump jacks that were just off the reserves.” — Stephen Buffalo, president and CEO of the Indian Resource Council of Canada
By Shari Narine
Local Journalism Initiative Reporter
Windspeaker.com

Of $69 million that has been meted out to date to oilfield service companies through Alberta Energy’s Site Rehabilitation Program (SRP), almost $6 million has gone to Indigenous companies.

Stephen Buffalo, president and CEO of the Indian Resource Council of Canada, would like to see the province guarantee 10 per cent of the $1 billion promised to the province from the federal government for orphan well clean-up work go to Indigenous companies.

“We’re doing a lot of measures to make sure Indigenous contractors get a lot of work from this,” she said, but added that some Indigenous companies did not have the capacity or degree of experience to deliver.

“We’re very confident that this (program) is going to deliver a lot of services and a lot of value for Indigenous companies and one of the measures by which we will assess the success of this program is how much goes to Indigenous contractors,” said Savage.

The announcement came July 15 that Backwoods Energy Services of the Alexis Nakota Sioux Nation was one of those companies to receive funding as part of the first round of money allocated through the SRP.

Backwoods, which will employ Indigenous workers, has the contract for reclamation activities on an initial 56 well sites on Enoch Cree Nation land. There are about 250 orphaned well sites on the First Nation. Backwoods, one of the largest Indigenous-owned businesses in Canada, has been in operation for 30 years and was acquired by the Nation in 2015.

“This is a great example of two First Nations working together to get their people employed on a project that creates jobs, benefits the local environment on First Nations land and strengthens our environmental performance so we can attract future investment to create more jobs in oil and gas. It’s a virtuous cycle. I love it,” said Kenney.

For Morin, it was a particularly poignant location as it was his great grandfather Chief Billy Morin who stood at that site in 1951 when it went into production and talked about the prosperity that would come.

The SRP will be delivered in $100 million increments, said Kenney, in part to ensure First Nations and small contractors benefit from the program.

Also to ensure Indigenous involvement, the provincial government has included a dedicated Indigenous liaison, participation of the Indian Resource Council on the industry advisory committee, and a reoccurring roundtable with Indigenous oil field service companies.

According to Savage’s press secretary Kavi Bal, incentives “are being developed to encourage the use of Indigenous oil field service contractors in future periods. Incentives will also be provided if work is completed on-reserve or on-settlement.”

Speaking with Windspeaker.com prior to the news conference, Buffalo said the resource council numbers indicate there are approximately 2,400 orphaned wells on reserves. However, the impact on First Nations is greater than that number.

“There’s an issue in the past that was called ‘drainage.’ You could literally see where the reserve boundary is by the number of pump jacks that were just off the reserves. Some of those we definitely want to ensure that those get cleaned up as well. We didn’t give up the land. We want to make sure in our territory that all of that stuff is taken care of. That’s absolutely paramount,” he said.

Buffalo added that the Indian Resource Council is working with the governments of Saskatchewan and British Columbia to get a handle on orphaned wells on First Nations there. Alberta, Saskatchewan and B.C. collectively received $1.7 billion from the federal government for orphan well remediation and reclamation.

Buffalo said the council will have a proposal to give to all three provinces shortly, and it includes pushing the 10 per cent set aside for Indigenous contractors.

“The importance of a set aside is that we can control it and also try to ensure that as many contractors can work as possible that do qualify under the program and it’s just fairness,” he said.

“The last thing we wanted to see was a non-Indigenous member … coming to a community where he’s not a part of and he’s doing the work while meanwhile there’s more than adequate resources in that community to help to do the work.”

Buffalo said it was important that the council, which has about 140 First Nations members, continue to advocate for its members.