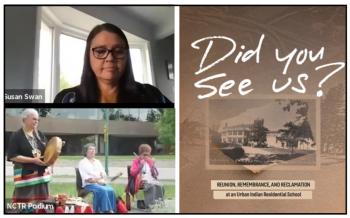 (Right) The cover of Did You See Us? Reunion, Remembrance and Reclamation at an Urban Indian Residential, and screen shots from the virtual launch of the book on June 23.

Assiniboia Indian Residential School was “part of a system designed and enacted to destroy Indigenous identities, eliminate Indigenous nations, and ensure the unquestioned dispossession of Indigenous territories.” —Andrew Woolford, a professor of sociology and criminology at the University of Manitoba
By Shari Narine
Local Journalism Initiative Reporter
Windspeaker.com

Did You See Us? It’s the heartbreaking question any survivor of a residential school could ask. But in this case, it’s the title of a book that includes firsthand accounts from 12 survivors who attended the Assiniboia Indian Residential School located in an upscale neighbourhood in Winnipeg.

Did You See Us? Reunion, Remembrance and Reclamation at an Urban Indian Residential School was launched in a virtual event Wednesday evening, June 23.

“This book comes at a time when our Indigenous and non-Indigenous communities are reeling in pain from the discovery of many children who are located in unmarked graves situated in Indian residential schools from across our country,” said host Susan Swan from Lake Manitoba First Nation.

Assiniboia survivors had their own recent personal loss to contend with. Theodore Fontaine, one of the survivors who worked tirelessly to have the book realized, passed away on May 10 at the age of 79.

“This book … would not have been possible without (Fontaine’s) determination, his passion and his vision,” said Andrew Woolford, a professor of sociology and criminology at the University of Manitoba.

A land acknowledgement written by Fontaine starts the book.

Woolford edited and facilitated the project, although he described his role as “mostly working to preserve the unique voice of each survivor and not interfering with the stories they chose to tell.”

“The stories in the book are a great resource to recommend to people who need to have a better understanding. The timing of this book is now. We have lost so many of our survivors without having an opportunity to hear their stories,” said Swan.

It’s a circumstance Swan is intimately familiar with. Swan’s mother attended Sandy Bay residential school. She returned home but took her life at the age of 19. Swan was raised in the child welfare system by a non-Indigenous family.

The Oblates of Mary Immaculate operated the Assiniboia Residential School from 1958 to 1969. The federal government then ran the school until 1973 when it was closed. Assiniboia was the first high school (grades 8 to 12) for Indigenous students in Manitoba. It was located in River Heights, one of the wealthiest neighbourhoods in Winnipeg.

Betty Ross was one of a handful of contributors to speak at the launch. From Cross Lake, Man., she attended Assiniboia in 1962/63 and then from 1963 to 1968. Her chapter entitled, “K?kwan-Ochiy? Why?” ends with “I have a million gazillion whys I will never be answered in this lifetime or beyond.”

Said Ross, who is now 74, “Why? Why residential schools? Did they achieve their goals? Look at us. Look at us survivors today. We’re very strong. We’re very resilient.”

For Valerie Mainville, who attended from 1962 to 1967, it was a time of discoveries, including poetry and restrictions, which she recounted in a three-page long poem entitled “Two Hundred and Twenty-Two Miles from Home.” The 222 miles is the distance from the school to her home in Couchiching First Nation in Ontario.

Mainville read her poem, finishing with the strong and prophetic lines “I was silenced then, not now, when I was 222 miles from home.”

“It was not easy, but we persevered,” said Mainville.

Carrie Perreault from Hollow Water, Man. attended from 1958 to 1961. She also spoke about the dichotomy of her experience, as it was “both negative and positive.” Her chapter, entitled “It’s a Whole Different Way of Life” talks about the loneliness she experienced.

But, said Perreault, “It showed me how to be strong, be independent, go after what I wanted.”

Mabel Horton from Nelson House, Man. attended from 1962 to 1967. She admitted she was reluctant to contribute to the book, but decided to do it “for the youth,” to let them know they can accomplish anything. Horton earned her master’s degree in public administration at the age of 60.

“It’s so important that we hear the messages that are being shared with us,” said Swan.

Woolford captures the “complexity” of the Assiniboia school in his contribution, examining information he drew from the school’s own archives.

“Assiniboia was a respite from earlier violence for many students. It was also a place where new friendships and familial relationships were formed with fellow students. But it was nonetheless part of a system designed and enacted to destroy Indigenous identities, eliminate Indigenous nations, and ensure the unquestioned dispossession of Indigenous territories,” he wrote.

That complexity is also found in the school’s unusual location in a wealthy urban neighbourhood “where differences in socio-economic status were quite so stark.”

Surprisingly the school was “often unknown” to residents and, even today, many Winnipeg residents are unaware it existed.

Did You See Us? also includes contributions from three neighbourhood residents, who said they either didn’t know about the school or knew little about it.

The Assiniboia Residential School Legacy Group, an incorporated non-profit organization with the goals to preserve and commemorate Assiniboia in partnership with the Winnipeg community, will be placing a commemorative marker at 621 Academy Road, the front of the former school site. Support for the project is coming from all levels of government.

Did You See Us? is published by University of Manitoba Press.

Did You See Us? can be purchased at https://www.mcnallyrobinson.com/home