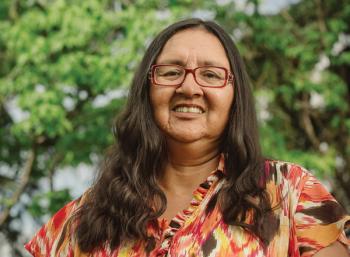 “A big part of our role is to assure them that we’re trying to do research differently. Not from the same Western perspective, but research that’s for Indigenous people, by Indigenous people.” — Dr. Moneca Sinclaire
By Adam Laskaris
Local Journalism Initiative Reporter
Windspeaker.com

Sinclaire, a post-doctoral health researcher at the University of Manitoba in the environment and geography department, was part of a team that developed and rolled out a mobile app for surveying Indigenous communities on health and wellness concerns.

Mitacs, a national innovation organization that “fosters growth by solving business challenges with research solutions from academic institutions”, recognized the impact of Sinclaire’s work, and named her the 2021 recipient of the Mitacs Award for Outstanding Innovation—Indigenous.

“I'm excited that the project got [recognized by the award],” Sinclaire said in an interview with Windspeaker.com. “To me, it's an innovative project that is not out there in any place right now.”

Sinclaire is to be celebrated at the National Arts Centre in Ottawa this evening Nov. 23 at 6:30 (Eastern).

Sinclaire is a member of the Opaskwayak Cree Nation, Man. She began work on the project a year after it was developed. She joined forces with independent designer Craig Dietrich, Dr. Shanna Lorenz, and the Integral Ecology Group.

Sinclaire’s role in the project as an outreach coordinator sees her meeting with chiefs and councils to explain the app’s capabilities and usage. It was originally designed as a COVID-19 questionnaire, but interest quickly grew in seeing the app’s use expanded. The key assertion of its users was to be able to own and control their own data.

“As we continued to work with communities, they started asking... ‘can we use this app for other things’?” Sinclaire said.

Sinclaire said there was no hesitation on the team’s end to allow the communities to use the app to cover other pressing social concerns.

“We said, ‘sure, why not’?” she said. “Because part of the reason that we developed it was because we wanted communities to be able to own their own data.”

The flexibility has been one of the app’s strongest assets.

“The app still asks questions [related to] COVID,” Sinclaire said. “But the majority of it can be changed.” The app is adaptable to the needs of the communities. For example, asking questions related to housing, language or youth empowerment.

Sinclaire said the app asks “very direct questions” that are “easy to understand”.

It is currently in use in five Indigenous communities in Manitoba and B.C., but there’s plans to keep expanding it further across Saskatchewan and Northern Ontario.

Additionally, Sinclaire said it’s been set up to operate with a “connectivity pack” that includes a small generator, router, laptop and tablet to help work in communities that may lack reliable internet access.

Sinclaire, who has worked in the healthcare field for more than three decades, said the project was a “refreshing departure from what I’ve been used to throughout my career.”

“Many of the projects [seen in the past] don't take the perspective from Indigenous people,” she said. “It's more of a Western based project. The types of questions that are being asked, to me, they're not beneficial for community members.”

This exclusionary history with the Canadian health system has led to hesitancy amongst some of the people being surveyed, Sinclaire said.

“Due to past historical events, many of the chiefs and council members have questions about who’s going to own the data and what’s going to be done with it,” Sinclaire said. “A big part of our role is to assure them that we’re trying to do research differently. Not from the same Western perspective, but research that’s for Indigenous people, by Indigenous people.”

“When I go into communities, I already have the understanding and the knowledge of what people are going through, and so people need to pause and reflect and take a second and, generally, I don't push people because I'm on a time limit,” she said.

“I know our history,” Sinclaire said.  “And I just allow people to take that time to stop, and if they need to, you know, go get a drink of water or think about it. Usually I'll come back to it later and give them space to be able to think about the answers that they want to give for the questions. I personally don't put a time limit on when I'm asking these kinds of questions.”

Mitacs CEO Director John Hepburn said that the app was part of an important strategic partnership between industry, government and academia.

“Collaborative innovation is a proven and productive approach to research that ultimately helps to deploy top talent within the Canadian economy,” Hepburn said. “Whether our researchers develop ground-breaking ideas by tapping into resources across our country or through international collaboration, their breakthrough work is benefitting all Canadians, and it’s this talent that is shaping the future of innovation.”