Pope’s visit to Canada limited by health issues, time but confirmed through itinerary 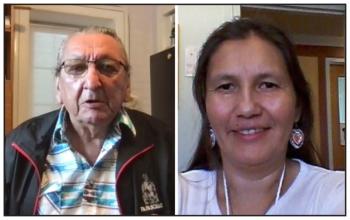 Fernie Marty, an Elder at the Sacred Heart Church in Edmonton, and Gilda Soosay, chairperson of Our Lady of Seven Sorrows parish council of Maskwacis.

“It’s important for my own healing that the Pope has chosen to come here.” — Fernie Marty, an Elder at the Sacred Heart Church in Edmonton
By Shari Narine
Local Journalism Initiative Reporter
Windspeaker.com

Pope Francis will be coming to Canada at the end of July, but his health has limited his itinerary to include a visit to only one residential school.

On July 25, the day after he arrives in Edmonton, the Pope will visit the Ermineskin Indian Residential School in Maskwacis.

“It’s anticipated that his principle statement would take place at Maskwacis,” said Edmonton Archbishop Richard Smith, who also serves as the national coordinator for the Pope’s visit.

Since this residential school will be the only such site Pope Francis will visit, it will not only be a local event, but an event of “national importance,” said Smith.

He was joined by Indigenous representatives from the Edmonton area in a virtual announcement June 23, which followed Canada’s Catholic Bishops’ release of the Pontiff’s itinerary.

“What we’ll need to be taking a look at is how we can have representation from other parts of the country come to the residential school site (and) how the messaging itself, of course, can be national,” said Smith. “So, it’s finding this balance between having a local visit that has to have national import and also respecting the obvious fact that the Pope has some serious mobility issues.”

The Ermineskin residential school was one of the largest in Canada, operating from 1916 until 1975.

Smith could not confirm if Maskwacis would be the site of the Pope’s official apology on Canadian soil or what the apology will consist of.

Smith acknowledged that concerns had been raised following the Pope’s April 1 apology in the Vatican when he met with Indigenous delegations from Canada. At that time, Pope Francis apologized for the wrongs of individuals. He did not apologize on behalf of the Catholic Church.

However, said Smith, “it’s important to recognize that when the Pope speaks that’s how he speaks. He speaks certainly personally, but he always speaks on behalf of the church. He is the head of the church after all.”

Gilda Soosay, chairperson of Our Lady of Seven Sorrows parish council of Maskwacis, said she had spoken to people who have “mixed emotions about the whole apology.”

Soosay, a member of the Samson Cree Nation and day school survivor, said while it was important for her that the Pope apologize to residential school survivors for the abuses that they had endured, “whether it’s taken to value for that person it’s up to that individual to accept it or to not accept it.”

The Pope’s agenda, as anticipated will include stops in Edmonton and area, Quebec City and Iqaluit. His engagements have been limited to one-hour instalments and will be a combination of private and public affairs.

“Wherever the Pope goes, in the immediate vicinity, those that would be nearest to the Pope, closest to him would need to be survivors from the residential school legacy. How that gets proportioned… that’s something we’re working out closely in dialogue with respective leaderships,” said Smith.

“We do recognize what’s driving it all of course is the recognition and need for survivors in particular to be close to the Pope in these various venues where he‘ll have his visit.”

Smith characterized the planning as an “extraordinarily complicated endeavour.”

On July 25, Pope Francis will visit Sacred Heart Church of the First Peoples, an Indigenous church in downtown Edmonton.

“It’s important for my own healing that the Pope has chosen to come here,” said Fernie Marty, an Elder at the Sacred Heart Church and a day school survivor. It was also important to him that the Pope make an apology on Canadian soil, Marty said.

On July 26, Pope Francis will celebrate an open-air Mass at Commonwealth Stadium in Edmonton. The facility can accommodate up to 65,000. The program will incorporate Indigenous traditions as part of the gathering.

In the evening, he will travel to Lac Ste. Anne. The annual pilgrimage attracts tens of thousands of Indigenous participants from throughout Canada and the United States. Programming will be offered throughout the day leading up to the Holy Father’s participation in a prayer service.

“People are looking forward to being with him, praying with him at Lac Ste. Anne,” said Father Garry LaBoucane, an Oblate of Mary Immaculate Catholic priest and the spiritual director of the Lac Ste. Anne pilgrimage. LaBoucane is Métis.

On July 27, Pope Francis will fly to Quebec City.  He will visit La Citadelle, where he will hold private meetings and offer a public address.

On July 28, he will travel to Sainte-Anne-de-Beaupré, where he will celebrate Mass. Sainte-Anne-de- Beaupré is one of the oldest and most popular pilgrimage sites in North America.

On July 29, Pope Francis will be in Iqaluit for the afternoon where he will have a private meeting with residential school survivors before attending a public community event hosted by Inuit.

He leaves for Rome in the early evening.

These sites were chosen by the Vatican, said Smith, and nothing can be added to the itinerary.

Smith said the church “does want to do its part” in covering costs of travel and accommodations to bring survivors to the Pope. However, how that will happen is still being determined, he said, but expects much of that work will happen with diocese bishops working at the local level.

Smith also anticipated other sources of funding may be available.

Father Alan Forgerty, CEO for Salt and Light Catholic media, speaking from Rome, said talks with  Cardinals in Rome indicated that the visit to Canada by the Pope was viewed as having a “global dimension.”

“So local, national, but also global with the Indigenous around the world who are looking to us,” said Fogerty.