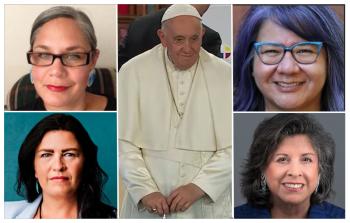 “I think as he started this conversation in the Vatican he looked at (the apology) and said, ‘This sounds good. I can do this.’ But as he listened to people across the country, he actually embedded more and more detail as he (went) along. I think that's him doing that and not his people. His people are probably aghast.” — Dr. Cynthia Wesley-Esquimaux
By Shari Narine
Local Journalism Initiative Reporter
Windspeaker.com

Genocide, perhaps the most powerful word that Pope Francis could have spoken to residential school survivors when he was on Canadian soil on his “penitential journey”, wasn’t said until he was on his way back to Rome.

The Pope offered his apology on July 25 in Maskwacis in Alberta. He said he was “deeply sorry.” He asked for forgiveness “for the ways in which many members of the Church…cooperated…in projects of cultural destruction and forced assimilation…which culminated in the system of residential schools.”

On the papal flight from Iqaluit to Rome this past Friday, July 29, he told reporters, “I didn't use the word genocide because it didn't come to mind, but I described genocide."

“Cultural genocide” was the phrase used by the Truth and Reconciliation Commission on the legacy of residential schools when it delivered its final report in 2015.

Yet it was only in his last official stop in Canada last Friday that the Holy Father finally drew the solid line between what Indigenous peoples lost—familial relationships, culture and tradition—and the “forced assimilations” caused by residential schools.

Pope Francis said in his address in Iqaluit last Friday that he was “reminded of the testimony of an Elder, who spoke of the beautiful spirit that reigned in Indigenous families before the advent of the residential school system. He compared those days, when grandparents, parents and children were harmoniously together, to springtime, when young birds chirp happily around their mother. But suddenly, he said, the singing stopped. Families were broken up and the little ones were taken away far from home. Winter fell over everything,” the Pope said to the large crowd gathered for his visit. He stopped in the community for only a short time after spending two days in Quebec.

Until the Pope made that connection, definitively, between the loss of a way of life and residential schools, Lori Campbell said she was “literally…sick to my stomach” with his talk of learning and thriving from ancestors. Campbell is associate vice president of Indigenous engagement at the University of Regina.

“He was saying that about white people…hearing that part and seeing that he wasn't going anywhere with it in relation to the experiences and (the Catholic Church’s) role in forcefully disallowing that for Indigenous children,” said Campbell, a member of Montreal Lake First Nation in Saskatchewan.

“He's the Pope,” the supposed intermediary between the Catholic people and God, said Wesley-Esquimaux.

“We're asking this guy… to actually humble himself before a people who have been humbled…He's coming down to a level of vulnerability which I think is extraordinary for somebody in his position,” she said. Wesley-Esquimaux is a member and resident of the Chippewa of Georgina Island First Nation in Ontario.

That the Pope didn’t stray from his well-crafted apology, says Robinson, is an indication that lawyers were strict about what he could and could not say.

Robinson says the Holy Father didn’t understand deeply enough the situation that residential school survivors explained to him when they made the trip to the Vatican this past spring. She blames that on interpretation, which she says she doesn’t trust.

“I don’t like the term ‘lost in translation’ because I think it’s quite purposeful to keep someone like the Pope in the dark,” she said.

Wesley-Esquimaux believes it was the Pope himself who added to his messages as the days in Canada went by.

“I think as he started this conversation in the Vatican he looked at (the apology) and said, ‘This sounds good. I can do this.’ But as he listened to people across the country, he actually embedded more and more detail as he (went) along. I think that's him doing that and not his people. His people are probably aghast,” she said.

Wesley-Esquimaux, who is not Catholic, says her Catholic friends believe Francis is the only pope in the last three or four popes who could possibly have made this apology.

“This is a pope who has actually stepped away from that deep conservativeness to protect everything papal, saying, ‘I'm going to stick my neck and foot out there and beg forgiveness for everything and for these people. This should never have happened’,” she said.

However, that the Holy See “begged forgiveness” more than he said he was sorry doesn’t sit well with Campbell.

“Asking for forgiveness is asking for something of Indigenous peoples which is separate from deeply apologizing for the role the church played and not individuals,” she said.

Wesley-Esquimaux believes that asking for forgiveness and not simply apologizing is “more contemplative” and is indicative that he listened to what was said to him over the course of the six days.

Francis has come under criticism for apologizing for the wrongs of some Catholics and not the actions of the Catholic Church as an institution.

Campbell says Catholics have told her that “the church is like God so it can't apologize. God wouldn’t apologize.”

However, that’s not how she sees it.

“To me it's a reluctance because it's a colonial institution that sees and recognizes itself above humanness and responsibility,” said Campbell.

Robinson says she knows some survivors “appreciated” the apology “but so many survivors also were unhappy, and that is fairly problematic because wasn’t the whole purpose to honour them and their experience?”

In a statement issued Aug. 2, the Assembly of First Nations National Chief RoseAnne Archibald and Northwest Territories Regional Chief Gerald Antoine, who led the First Nations delegation in the national papal events, both expressed their disappointment in the Pope’s visit.

Francis did not denounce the Doctrine of Discovery, which Archibald personally called on him to do; nor did he respond to calls to return diocese lands to First Nations or commit to returning sacred items in display or storage at the Vatican.

“(His visit) feels incomplete,” said Archibald. “It feels as though there were legal considerations that prevented the Pope from offering a more fulsome apology. The Vatican must answer for why the papal visit fell short on so many fronts.”