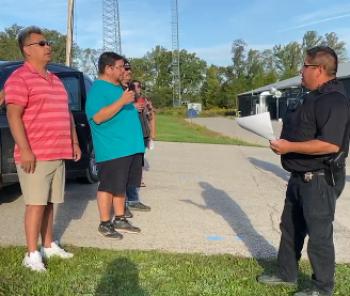 A Six Nations police officer speaks with protestors who blocked entrances to the parking lot of a polling station on the territory preventing it from opening.The station was moved more than 20 kms away. (Photo via Facebook)

A polling station for the federal election was forced off the Six Nations of the Grand River in southern Ontario on Monday following an early morning protest by community members.

Video outside the Gathering Place, a conference centre and concert venue that was expected to host three voting polls, showed trucks and cars blocking the entrances to the parking lot with police on the scene before polls were scheduled to open at 9:30 a.m.

After the entrances were blocked, poll workers locked the doors and police were brought in, said Elections Canada spokesperson Rejean Grenier.

Police tried to “defuse the situation” but were unable to, so the local returning officer made arrangements to move the polls to an off-reserve community centre, Grenier told Windspeaker.com Monday evening.  That location was more than 20 kms away.

Video from Monday morning showed discussions between the protestors and election officials before they left the building.

The on-reserve station was the only one for the community of more than 12,000 residents near the cities of Brantford and Hamilton, and was established with the approval of the elected council, Grenier said.

The Haudenosonee Confederacy, also known as the hereditary council of Six Nations, expressed opposition to the on-reserve polls in a news release Sept. 15.

“The Confederacy Council has, and always will, continue to discourage Onkwehonwe (community members) from participating in the election of leaders of other governments.”

The council also wrote “we urge those involved to immediately remove the polling stations and elections (sic.) materials from the territory. This is a violation of not only treaty rights, but our human rights to exist as distinct people.”

Following the release, Elections Canada again consulted with the elected council to ensure the polling station would be welcome, Grenier added. The decision from that meeting was “we should be there” and so preparations continued, he explained.

The placing of polls on Haudenosaunee territory “is a violation of Treaties and commitments our Ancestors made amongst the Onkwehonweh and the immigrants that arrived over the past 400 yrs,” the Confederacy news release stated.

“We have agreed by the Two Row Wampum Treaty, to never interfere in one another's government, laws, and ways. We also are bound by the Silver Covenant Chain Treaty, which is a Treaty of Peace, Friendship, and Mutual Respect. We committed to assist one another when needed. Canada has a Treaty obligation to respect our Nationhood, as we have never relinquished our sovereignty and we view the actions of all involved in Canada's elections as doing such, in violation of Treaty Rights and Responsibilities we each are under obligation to fulfill,” the release continued.

The polling station was successfully relocated and, according to local election officials, had a fairly good turnout, Grenier related.

It would be “very hard to tell” if any voters were unable to cast ballots due to the change of location, but the local returning officer believes the turnout from Six Nations may actually be higher than in the 2019 election, he said.

Speaking for the Confederacy, Colin Martin spoke to media as poll officials left the reserve, saying “we pushed a major point here in asserting our sovereignty”, adding that “allowing this (election poll) to happen would just further entrench Canada's foothold on our territory.”  Martin said “it’s the people’s responsibility to enforce the will of the (hereditary) council.”

The Confederacy website describes the council as having existed “from time immemorial” and “continues to enjoy the support of the Six Nations as their representative government even though an elective system was established in 1924.”

Six Nations elected Chief Mark. B. Hill could not be reached for comment Monday evening.