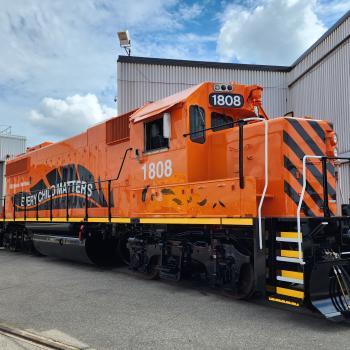 Survivor June Commanda “talked about one of the things that has really plagued her over the years was anxieties over just seeing a train or being near a train because it was utilized to take kids to residential school…. It was quite moving to see her climb up onto the train and blow the whistle. It was very symbolic.” — Nipissing First Nation Chief Scott McLeod
By Sam Laskaris
Local Journalism Initiative Reporter
Windspeaker.com

That’s because the provincial transportation company has rolled out a locomotive that is painted orange and has the phrase Every Child Matters emblazoned on it. The unveiling comes just before the  National Day of Truth and Reconciliation Sept. 30. The train will travel throughout northern Ontario.

The locomotive was unveiled with a ceremony Monday, Sept. 12 in North Bay, Ont., which is where Ontario Northland’s head office is located. The company’s shipping yard where train maintenance takes place is also in North Bay, near Nipissing First Nation.

McLeod said Ontario Northland representatives contacted him earlier this year seeking his advice into the Every Child Matters locomotive.

“During the planning stages they approached me to ask for input on what they were doing,” he said. “Obviously I gave them some positive feedback on their initiative. This is totally their initiative, which to me shows me some good corporate responsibility.”

The Every Child Matters locomotive, which is numbered 1808, will be part of Ontario Northland’s Polar Bear Express route, travelling from Cochrane to Moosenee and back.

Ontario Northland spokesperson Kate Bondett said the painted locomotive will last for up to 10 years.

“Ontario Northland is taking part in the Every Child Matters campaign to help raise awareness about the painful history and ongoing impacts of residential schools in our country and in our communities,” Bondett said.

McLeod was pleased to be part of last week’s locomotive unveiling ceremony.

“When they were ready to do the unveiling they invited myself, as well as council and some survivors and the children of survivors to come,” he said.

Among those taking part was June Commanda, a Nipissing First Nation councillor and residential school survivor.

“She talked about one of the things that has really plagued her over the years was anxieties over just seeing a train or being near a train because it was utilized to take kids to residential school,” McLeod said of Commanda. “So, there was that triggering factor.”

McLeod added Commanda’s anxieties seemed to have been instantly lessened.

“When that train came out with the orange and the feather and Every Child Matters writing on it, it relieved a lot of those anxieties for her,” he said. “She saw this as a coming full circle that once the train was used to pick up the kids and bring them there and now the train is being used to help in the reconciliation process.

“It was quite moving to see her climb up onto the train and blow the whistle. It was very symbolic. But the reality was I was standing beside her and I could see a lot of those anxieties just lift from her. She was very happy and glad to be part of it.”

McLeod believes the Every Child Matters locomotive will be important as it will help raise awareness and continue discussions on Canada’s history with residential schools.

“As other things have shown us, it wears off and the support and pressure for governments to change things or do something about it tends to die,” McLeod said of issues that disappear from the news cycle. “Just look at the war in Ukraine. There’s not many people talking about it anymore. So, when that happens government feels they don’t have to do anything about it. I think keeping it on the forefront is one of the bigger pieces to that.”

McLeod said he knew Ontario Northland’s initiative would be a positive one.

“I thought it was a great idea but I didn’t really envision the impact it was going to have until I was sitting there and it actually rolled out,” he said. “And then it just dawned on me that this is going to be good.”

“From the feedback and attention it got on my social media, from Indigenous people, from here to B.C. was phenomenal,” McLeod added. “I think I’m approaching 100,000 views on a feed that I put out. And I knew that was going to happen. I think First Nations people like to see these kinds of things and they see them not just as token gestures but that people actually care. They didn’t have to do this.”

Though details have yet to be announced, McLeod said it is his understanding that Ontario Northland will be adding more Every Child Matters locomotives, which will be used for freight, at some point in the future.

“That will also be spreading that message,” he said.

McLeod believes only positives will come out from this and other Ontario Northland initiatives with its Every Child Matters campaign.

“It’s a venture that they took on and they’re really keen on their corporate responsibility and building a relationship with Indigenous people,” he said. “I think they’re on the right foot.”