Night Shift dance series to be live-streamed from Toronto 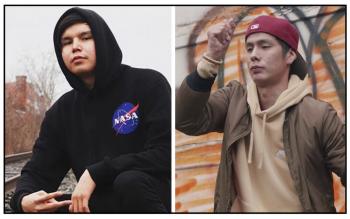 “There’s sometimes no fear in the action of doing, without really worrying about what is going to happen or what people will think.” — Christine Friday
By David Owen Rama
Local Journalism Initiative Reporter
Windspeaker.com

Broadcast live from The Citadel: Ross Centre for Dance based in Toronto’s Regent Park neighbourhood, the Night Shift series will feature four unique and dynamic performances that investigate themes of resilience, identity, ritual and storytelling.

“The mandate of the (Night Shift production) is to bring the voices and artistry forward of those artists who may not have been given the opportunity to have a platform like this, so that they can be experienced by a larger audience,” Friday tells Windspeaker.com over the phone from her home on Bear Island in Lake Temagami.

The series begins Sept. 29 with Mestiza (mixed race woman in Spanish). Choreographed and performed by celebrated multi-award winning artist Olga Barrios, the piece is highly-influenced by Barrios’ personal investigation of her Latinx background and her exploration of her Indigenous Colombian roots.

On Friday, Oct. 1, Night Shift presents Grandmother’s Drum by multidisciplinary performer Sashar Zarif, who is a celebrated artist focusing on the performing arts of Sufi and shamanic cultures. Drum will explore the concept of ownership versus stewardship of home as it is practiced in nomadic cultures. The title of the piece references Zarif’s grandmother’s ever-present hand drum which she always referred to as ‘the door to the spirit world.’

Concluding the Night Shift live streamed series on Saturday, Oct. 2 will be a solo performance by Canadian-based Trinidadian dancer, choreographer, singer, musician, costume designer and researcher BaKari Ifasegun Lindsay. Called SpiritYouAll, the piece is a meditation on the power of the human spirit.

“With artistic expression I think there is a higher frequency and sensitivity of awareness,” says Night Shift co-curator Friday. “There’s sometimes no fear in the action of doing, without really worrying about what is going to happen or what people will think.”

Friday says she thinks the true value to be derived from the artist’s experience is the journey itself “and not necessarily the end result.”

“We’re in touch with the Spirit. It’s almost like you begin something and it leads from one thing to the next, and it leads you on this journey, and you had no idea that it was going to take you to where you are, but that’s the beauty of living your life as an artist, and being in the unknown, and living through the mystery of it.”

The Night Shift dance series comes to audiences through the art of cinema production under the guidance of film industry veteran Barbara Willis Sweete, a critically-acclaimed Oscar-nominated filmmaker specializing in dance-focused cinema.

The series was curated remotely between members of the Citadel + Compagnie producers and selection committee. Night Shift co-curator Friday lives on Bear Island where she works with youth and produces dance films, often recruiting members of her family to serve as her technical crew.

“I'm self-directed and self-produce,” says Friday. “I've done five dance films and I find it to be a very powerful way to connect with a wider audience.”

“I do a lot of filming on my family’s ancestral land and territory. It's the way to bring the audience into these places that are quite isolated and quite special. So it's a great way to carry an audience to these beautiful places.”

Friday views the amalgamation of film and dance as a powerful tool for documenting the creative journey, and her film work sets out to capture the experience while acting as a witness to the stunning natural beauty of her traditional home on Lake Temagami.

The dancer-director has recently released a 10-minute self-produced film called Path Without End. Friday’s new film chronicles interviews with elder members of her family as they recount their experiences as children at the Shingwauk Residential School in Sault Ste. Marie, Ont.

“To me film is quite a natural way to bring these visions and our dreams into reality. I really like the medium, the complexity of the layers of presentation.”

The Night Shift series streams live as part of the Toronto Fall for The Dance North 2021 festival season with runs now until Oct. 29.

Tickets for the live stream broadcast of the Night Shift series are single access and cost $15, which allows you to then stream all four works for seven days.

For more information about Night Shift 2021, and to purchase your tickets to this “Late Night Dance Fest” you can visit the series website at Nightshift - Citadel + Compagnie (citadelcie.com)