Never look at the seal hunt in the same way again 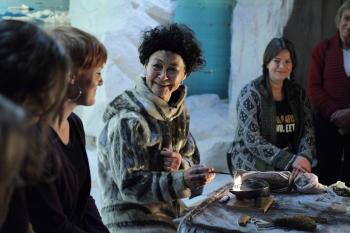 Angry Inuk is among the very best films of 2016 in Canada, capturing a top 10 spot on the annual list compiled by the Toronto International Film Festival. It will be screened Monday, Jan. 16 and Jan. 17 as part of the 16th annual Canada’s Top Ten Film Festival, which opened last Friday and runs until Jan. 26 in Toronto.

The Angry Inuk documentary is produced by Iqaluit-based filmmaker Alethea Arnaquq-Baril (Unikkaat Studios/EyeSteelFilm) and Bonnie Thompson of the National Film Board. It challenges the anti-seal hunting movement with the perspective of the Inuit populations who rely on the seal hunt as part of a sustainable economy.

“I live up in Nunavut. I’m Inuit and so I eat seal meat and wear seal skin…and over the course of my life I’ve come up against resistance and friction from people living in the south who see animal rights campaigns calling seal hunting an evil thing,” said Arnaquq-Baril.

She told CFWE FM’s Dustin McGladrey that as a documentary film-maker she decided she “couldn’t not make this film.

“It’s about how Inuit have been affected by those campaigns and kind of try to change the narrative around seal hunting.”

Arnaquq-Baril and her fellow Inuit activists push up against outdated perceptions of Inuit. Angry Inuk was selected by TIFF festival goers for the Hot Docs Audience Award. It has since won the Alanis Obomsawin Best Documentary Award at the imagineNATIVE Film + Media Arts Festival and the award for Best Canadian Feature at the Dreamspeakers Film Festival.

Arnaquq-Baril’s family lives on Baffin Island. The protests and seal skin bans have hit the community hard. Images of whitecoat baby seals being clubbed are still used as a marketing tactic of the anti-seal movement, decades after hunting “whitecoats” was banned.

“The images being shown of seal hunting, mostly over the years, has been of southern seal hunting done by non-Indigenous people,” said Arnaquq-Baril. “I just wanted to show what seal hunting looks like from our perspective and how different it is from the images they portray.” Inuit are the majority of commercial seal hunters, Arnaquq-Baril said.

Arnaquq-Baril underscores the irony of people, including many celebrities from some of the wealthiest areas in the world, lecturing the most economically-challenged people on how to live, says Steve Gravestock, a TIFF programmer.

“I wanted people to have a chance to fall in love with Inuit as a people and with our culture, and connect with us as real human beings so that they could see we’re not just big, bad, evil animal killers… There’s a whole different world up here and I wanted that to feel real,” said Arnaquq-Baril about her film.

She said the response to the film has been “over-whelmingly positive.” She has no illusions, however, that changing perceptions of the seal skin hunt won’t take time.

“I think it will be years before we are able to change the overall public perception of seal skin.” And, says Arnaquq-Baril, it will take a lot of allies.

Another Inuit film to be screened at the Top 10 festival is Maliglutit (Searchers), directed by Zacharias Kunak. It will be shown each day until the festival ends. It is described as an “Arctic epic inspired by the classic John Ford western of the same name, about a vengeful husband who sets off in pursuit of the violent men who kidnapped his wife and destroyed his home.”

For more information about the Canada’s Top Ten Film Festival, go to http://www.tiff.net/canadas-top-ten/