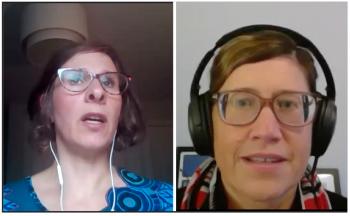 “We heard that there is a need for more dialogue with industry, uniformed policy and processes. We need an asset management strategy and more.” — Michelle Vello, a policy analyst, on the Canadian Minerals and Metals Plan
By Sam Laskaris
Local Journalism Initiative Reporter
Windspeaker.com

Officials with Natural Resources Canada (NRCan) continue to work on a number of Indigenous-specific projects. And even though the COVID-19 pandemic has slowed some of these initiatives, the commitment level for them remains high.

A number of these efforts were discussed during a panel held at the four-day Cando Conference, which wrapped up last week. The panel, which featured speakers from the federal department, was titled NRCan’s Indigenous Engagement in Natural Resource Development.

Cando is the national organization which promotes economic development in Indigenous communities across Canada.

Michelle Vello, a policy analyst who joined NRCan in 2018, provided an update on the Canadian Minerals and Metals Plan.

This plan has six strategic directions, including one called Advancing the Participation of Indigenous People.

A goal was to host three or four conferences in various regions in partnership with Indigenous business leaders on Indigenous procurement.

One conference was staged in Vancouver this past January.

“We heard that there is a need for more dialogue with industry, uniformed policy and processes. We need an asset management strategy and more,” Vello said.

It remains to be seen, however, when other conferences will be held.

“Unfortunately, the COVID pandemic has slowed our progress,” Vello said. “Many conferences were either cancelled or moved online, which limited our opportunities for engagement with stakeholders and our task team members.”

But NRCan officials said they have not stopped thinking about ways to move forward.

“For our Indigenous procurement conferences we are considering moving to online webinars as well as creating video vignettes with Indigenous leaders in the meantime,” Vello said. “We are looking at alternative ways to deliver workshops that will provide regional contexts and local resources on mineral exploration and development for community (economic development officers) and land managers.”

Vello said there are a number of steps that NRCan has been taking to further current Indigenous work.

This includes working with the Mining Industry Human Resources Council on developing policies and advancing and promoting Mining Essentials, a pre-employment program for Indigenous communities.

And future ventures are also being discussed.

“We realize though COVID has halted progress we are still planning on convening a series of Indigenous mining procurement workshops by 2022 to increase Indigenous involvement in supplying goods and services required by the mineral and exploration sector,” Vello said.

As for Carmen Rupp-Eke, she’s worked for NRCan’s Canadian Forest Service for the past dozen years.

And for three-and-a-half years now she’s been a program officer for its Indigenous Forestry Initiative.

Rupp-Eke added forests play a vital role – culturally, spiritually and economically – in the lives of many Indigenous communities.

A recent stat indicated 70 per cent of Indigenous communities in the country are in forested areas.

Consuelo van Beek teamed up with Andrew Ashkewe to provide information at the conference about a science and technology internship program the government offers.

“We were able to talk about barriers to employment facing Indigenous youth,” van Beek said, adding adjustments were made to the NRCan internship program after consultations at a pair of conferences.

Changes made included removing post-secondary education as a requirement, increasing maximum wage subsidies to reflect the additional costs of living in the north and remote communities, and including training as an eligible expense.

Ashkewe, who is a policy and program analyst for NRCan, said the changes have significantly boosted Indigenous participation.

“The program changes have been a big success,” he said. “But we’re not done making changes or doing work on the program just yet.”

The program is on track to almost double again for 2020-21, having an anticipated Indigenous participation of 22.76 per cent.