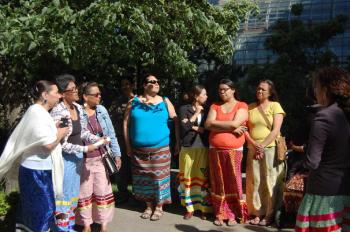 Elmira June Deschamps (second from left) stands with supporters as she awaits the beginning of the court case. (Photo: Shari Narine)

A grieving mother will be able to bury her child on her home of Louis Bull First Nation.

A mother grieving the loss of her adult child found herself in court today fighting to have her 23-year-old daughter’s remains returned to her so she could be buried on the Louis Bull First Nation, Alta.

A court ban prohibits the naming of the mother and daughter.

The mother was called to the Royal Alexandra Hospital in Edmonton when it became clear that the person giving permission to harvest the young woman’s organs had no authority to do so.

The call gave the biological mother the opportunity to say goodbye.

“You could tell she was already making her journey when I saw her,” said the mother. The daughter died in the early morning hours of June 3.

The daughter reached out to her biological mother three years ago. Said the mom, “It made my life complete. It made my life content. If I was to go any time I would feel that my life was complete because my daughter came back to me. That’s the joy I felt knowing that she came home to me once again.”

Now, the biological mother wants her daughter to come home for the last time. But she finds herself fighting the foster mother—a woman she thanks for giving “my daughter a good life” —for the young woman’s remains.

“We’re not sure that’s entirely the case or (the foster mother) has standing to do that,” said Hamish Henderson, lawyer for the biological mother.

The daughter had complex health issues and needed to access a wide array of medical services that were not available on the First Nation, so her biological mother put her into government care at 10 months of age.

Alexis Nakota Sioux Nation Chief Tony Alexis, who appeared at the court house in support of the mother and the Louis Bull First Nation, said this situation underscores the need to embrace Jordan’s Principle, which uses a child-first approach to resolving jurisdictional issues for health costs.

“If there was support for her right from the beginning, all the way through her life, I know someone from her community would have looked after her and this would not be an issue. So what the system is doing right now is failing us once again,” he said.

The young woman was taken by ambulance from her Edmonton apartment to the hospital due to a reaction to a sleeping pill she took. Her biological mom said the pill did not “react right” with her insulin and led to severe acidosis in her liver, which caused a heart attack.

On Monday, a judge ruled that the remains could go home with the biological mother. However, the foster mother appealed that decision.

“I’m hopeful that the judge will confirm the order she granted yesterday that gave the mother the right to determine the disposition,” said Henderson.

Chief Randy Ermineskin of Ermineskin First Nation, at court to support his fellow Maskwacis tribe member, said the situation harkens to the residential school era where children died and their bodies were never returned home for burial.

“We see this kind of continuing the cycle and we need to end it soon,” he said.

The biological mother says she never wants any other mother to go through what she is going through now.

“If anything good is going to come out of my daughter’s death it’s that things will change in that regard. I’m overwhelmed standing here, talking to media about it. It is really tough and that’s all I want is change for when things like this happen that we don’t have to come to court to fight for our own. That’s what I want for this,” she said.