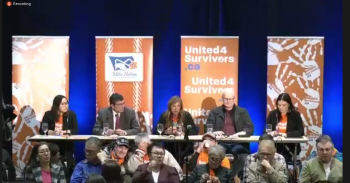 I’ve always known that we all have an ethical, moral responsibility to settle the claims of the Métis residential school system in this country and more specifically…the Île-à-la-Crosse residential school.” — Duane Favel
By Shari Narine
Local Journalism Initiative Reporter
Windspeaker.com

The Métis Nation-Saskatchewan is financially backing new legal action by Île-à-la-Crosse residential school survivors against both Canada and Saskatchewan.

“We are supporting the residential school survivors’ legal fund. We’re also supporting them morally, ethically, emotionally. They are part of our community, so they have our full support,” said MN-S Vice-President Michelle LeClair.

LeClair was joined this morning by Louis Gardiner and Duane Favel, two of six plaintiffs whose names stand in this new litigation. It follows more than 15 years after the Elizabeth Aubichon v Attorney General of Canada and the Government of Saskatchewan, was filed in 2005 as a proposed class action.

“They’re still fighting for justice. They’re still sitting here today…and they have not had justice and many of those survivors have passed away,” said LeClair.

Île-à-la-Crosse residential school was not included on the list of recognized schools that were part of the Indian Residential School Settlement Agreement. An attempt to add the school was rejected based on the criteria set out which stated a school had to be operated with government support and not by the church alone. However, based on records obtained, lawyers now have evidence that the school was funded by the government and said meeting the criteria was no longer a concern.

A statement of claim against both the federal and provincial governments was filed in the Saskatchewan Court of King’s Bench on Dec. 27, 2022. Both survivors and intergenerational survivors are named as plaintiffs.

This lawsuit is brought on behalf of all First Nation, non-status, Inuit and Métis who attended the northwest Saskatchewan school as students, including both day students and residential/boarding students.

The legal action follows a memorandum of understanding that was signed in 2019 between the Île-à-la-Crosse boarding school steering committee and the MN-S with the federal government.

While movement has stalled on the MOU, which was to open dialogue “to collaboratively chart a path forward to address the legacy” of the school, LeClair said she hoped the “spirit” of the MOU continued.

Also stalled are talks with the province. A May 2022 request for a meeting was “respectfully declined” in a Nov. 10 letter from Don Morris, minister responsible for First Nations, Métis and Northern Affairs.

“In the last year, we’ve lost so many survivors who had such hope that they would be acknowledged and compensated. Multiple governments, both at the federal and provincial level, have been pressed on this issue…but nothing ever seems to happen until we take it to the courts,” said LeClair.

However, she added, that was not the route they wished to pursue.

“Coming to the table to negotiate early and find a resolution that addresses the injustices of many survivors who have passed away without any recognition of their experience, without compensation, can help stop the compounding of this injustice,” said LeClair.

“We hope that the file can move forward aggressively because a lot of our survivors are getting up there in age and there’s not many of us left. And we need to tell our story,” said Gardiner.

Gardiner, a member of the survivor class in the litigation, was taken to Île-à-la-Crosse school at the age of five, attending from 1961 to 1969. According to the statement of claim, he “endured psychological, physical and sexual abuse from the school staff, including psychologically and physically abusive discipline for speaking Michif.”

He was expelled from the school “after fighting back against the physically abusive discipline inflicted by the School staff,” reads the statement.

“We suffered the same trauma as all residential schools,” said Gardiner.

Favel, who is now mayor of Île-à-la-Crosse, is representative of the family class as his father attended the school in the late 1940s to the early 1950s. Favel himself attended as a day student.

“As the mayor…I’ve always known that we all have an ethical, moral responsibility to settle the claims of the Métis residential school system in this country and more specifically…the Île-à-la-Crosse residential school,” said Favel.

He said that Métis communities were dysfunctional, suffering from drug and alcohol addictions because of the impacts of residential schools. He said it was “heartbreaking” that Métis continued to struggle to be recognized and acknowledged for their suffering.

Favel said Métis communities needed the same sort of supports First Nations and Inuit had received to find their way to becoming healthy.

“Healthy Indigenous communities mean a healthy province of Saskatchewan,” he said. “We need the provincial government and federal government to come to the table and begin a dialogue in terms of settling and recognizing the (Île-à-la-Crosse) survivors…and all the survivors within the province of Saskatchewan that attended Métis residential schools.”

Gardiner and Favel are joined by Margaret Aubichon, Melvina Aubichon, Emile Janvier and Donna Janvier as the named plaintiffs in the litigation.

Legal counsel Tina Yang, with Waddell Phillips Professional Corp., said neither Canada nor Saskatchewan had filed their statements of defence. She said they had asked for their statements to be delayed until after the certification process of the class action.