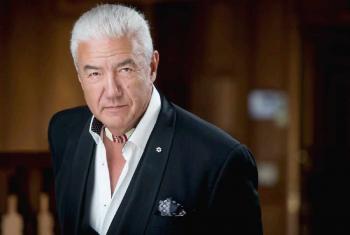 When Tom Jackson first got into the business of entertaining, he knew three songs—Sounds of Silence, House of the Rising Sun, and “something else,” he laughs.

One day at a party he was asked to sing a song, and that’s when his talents were discovered. A man at that party had a radio show and invited Jackson to appear on it.

“It was the biggest thing that happened to me,” he told Jeremy Harpe of CJWE 88.1 Calgary. “All of a sudden, there I was singing on the radio.”

The manager of the station, CBC radio 94.3 FM, hired Jackson as a radio broadcaster.

“Radio is my favorite thing to do,” said the celebrated singer/songwriter and film and television actor.

He is well known for starring as Chief Peter Kenidi on the much loved North of 60 television series that ran from 1992 to 1998. APTN has chosen to bring back and air the entire six seasons. Generations of people have followed North of 60, said Jackson.

“It was so true to form. So valid and relevant. People just continued to love it.”

Another series on APTN that Jackson is involved in, Red Earth Uncovered, has been renewed, he said. Shooting is to begin in January.

He will be seen in the detective television series Cardinal, which will air in the fall. And his movie Hard Powder with Liam Neeson, which caused some controversy last March when Parks Canada refused producers licence to film sequences in Banff and Jasper national parks, will be released in January 2019.

“I’ve had a really active year,” said Jackson. “For me, I used to think, if I ever get to be as old as Dan George and have a career, that would be awesome. Well, I’m here.”

His singing career came from a choice back in the mid-70s when Native social justice activism could often take a violent turn. The choice: pick up a gun, or pick up a guitar.

“And I chose a guitar. I believe that music is the greatest instrument of change in the history of mankind.”

He said the opportunity is there for anyone to be a change agent with music, and history is coming around again as young people gain their voices.

Jackson is still recording and has gone back to a song originally released in the 1990s called Can’t Take That Away (The Vampire) and recorded it. It’s about a female vampire with a thirst.  Learn more by listening to the interview below.