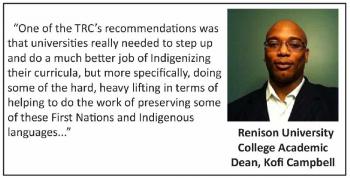 By Windspeaker.com Staff
With files from Jeremy Harpe of CFWE-FM

Sitting around as an institution, discussing how Renison University College was going to live up to its obligations to the Truth and Reconciliations Commission’s Calls to Action, it was decided the school should lead with their best foot.

In September, Renison will be offering a new program called Introduction to Kanien’kéha (Mohawk Language).

Renison is affiliated with the University of Waterloo, and it will be the first Indigenous language course the university has ever offered.

“One of the TRC’s recommendations was that universities really needed to step up and do a much better job of Indigenizing their curricula, but more specifically, doing some of the hard, heavy lifting in terms of helping to do the work of preserving some of these First Nations and Indigenous languages which are threatened,” said academic dean, Kofi Campbell.

The university already has a reputation for language scholarship and instruction, so Renison felt that this would be a way to immediately contribute, given the expertise already within the school.

“We settled on beginning the Mohawk language, partly because it’s one of the threatened languages.”

There are about 3,500 speakers of Mohawk today, Campbell said. “There’s a sense of urgency there for us, I suppose.”

“Technically it is a very complex language,” said Bilodeau. “It would be on the same scale as trying to learn Arabic or Japanese. It is just so different from Indo-European languages that learning Kanien’kéha requires a totally different approach.

“The language is so well-constructed that it almost feels mathematical, but it’s also very beautiful and intuitive once you’re able to open your mind to how the language actually functions.”

Reaction to the offering was dramatic. With only 15 seats available, the program fill—l ed quickly and many people just asked if they could audit the course.

Renison has always believed that language is a carrier of culture, Campbell explained. So, by doing their small bit to preserve the language it’s also a way for Renison to help preserve and strengthen the culture.

And Campbell said that the Mohawk language program should be viewed as a beginning for the school, with other Indigenous language programs to be brought forward in the future.