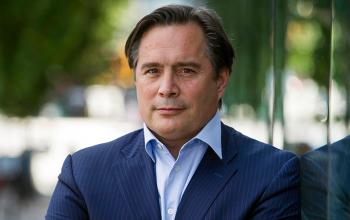 Keith Henry, president and CEO of the Indigenous Tourism Association of Canada.

“As it stands today, despite that announcement (Tourism Relief Fund), there has not been a single Indigenous business that has been able to access that program successfully.” — Keith Henry, ITAC’s president and CEO
By Sam Laskaris
Local Journalism Initiative Reporter
Windspeaker.com

Research is suggesting it could be a long and bumpy recovery—lasting perhaps a decade or even longer—for the Indigenous tourism industry in Canada.

A Conference Board of Canada report released this past week indicated there have been some signs of an industry recovery for 2021, but it is still projecting a 54 per cent decline in direct GDP (gross domestic product) compared to levels before the COVID-19 pandemic hit Canada early last year.

The Indigenous Tourism Association of Canada (ITAC) commissioned the report, the third economic assessment issued on its behalf by the Conference Board of Canada since 2018.

An updated analysis and inventory were done three years ago, when the Indigenous tourism industry was booming across the country.

“We did an interim economic report after the first two waves, so about a year ago,” said Keith Henry, ITAC’s president and CEO. “This is an updated report we’ve been working on and we just wanted to see after three waves how bad it is.”

Henry said ITAC’s original plan did not include an update in 2020 or this year.

“We weren’t going to do it for a few more years,” he said. “Obviously we wanted to measure the impacts of last year. We wanted to see how serious it has been because there is just no data for Indigenous tourism in the country unless we do it.”

Back in 2019, pre-pandemic, Indigenous tourism in Canada employed almost 39,000 people and brought in an estimated $1.86 billion in direct GDP.

The number of workers almost doubled this year to about 20,000. And there will be an estimated $858 million in direct GDP in 2021.

About 350 Indigenous-owned tourism operators across Canada responded to a detailed survey between April and June of this year. Those owners were asked for their insights into what they’ve experienced during the COVID-19 pandemic and what they anticipate will happen to their businesses this year and also in 2022.

Henry said he was not really surprised with any of the information released in the report on Sept. 15.

“It pretty much reinforced the challenges we have,” he said.

But what is of further concern is found in some internal ITAC research combined with some data compiled by Destinations Canada, a Crown corporation that is responsible for the national marketing strategy worldwide.

Henry said officials from Destinations Canada and its partners have compiled information to try and determine how long it will take tourism businesses to recover and get back to 2019 levels.

“They expect to be back by 2024 or 2025,” Henry said. “But we’ve been hit hardest of the hard hit in tourism. We’re going to be at least until 2028 to get back to 2019 levels. So, we’re being disproportionately impacted and our businesses are disproportionately feeling the loss of business.”

Henry said it could be even longer than 2028 for the Indigenous tourism industry to fully recover.

Federal officials had announced a $500 million Tourism Relief Fund in mid-July. And 10 per cent of this fund, $50 million, was to go towards Indigenous tourism businesses.

In 2020 the Canadian government had provided $16 million in funding to ITAC, which then distributed it in the form of grants of up to $25,000 each to about 700 businesses.

Henry said Indigenous portions of the federal money announced in July did not go directly to ITAC for distribution. Instead, it was sent to various regional development agencies.

“We don’t believe that’s going to be an effective process at all,” Henry said. “As it stands today, despite that announcement, there has not been a single Indigenous business that has been able to access that program successfully.”

This year’s federal budget allocated $2.4 million to ITAC, a far cry from the $18 million it requested.

Henry said that while ITAC officials are keen to continue advocating for more funding, things have been at a recent standstill.

“They put all projects on hold because of the (federal) election,” he said. “We don’t have much confidence we’re going to get anything (more this year). We hope we do but we’re not confident.”

Henry said ITAC officials are going to be ready to proceed with their advocacy work as soon as possible.

“We’re far from getting out of this woodwork right now,” he said. “We continue to say to government, whoever gets elected on Monday, the first thing we’re going to be doing is finding out when the minister of Tourism is appointed and the minister of Indigenous Services and saying we need to act now. We cannot wait for these programs. More has got to be done. We’re going to be advocating very hard once this election is done.”