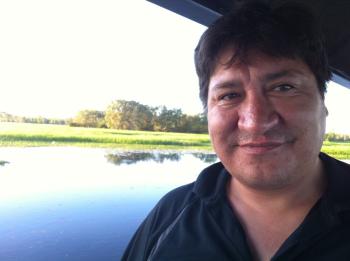 Steven Nitah is a member of the Indigenous Circle of Experts which developed the Knowledge Basket database.

“The Knowledge Basket is a combination of all the different research that has been done. It’s got academic reports, government reports, case studies of Indigenous protected conserved areas and different governance and models.” — Steven Nitah, of the Indigenous Circle of Experts
By Crystal St.Pierre
Local Journalism Initiative Reporter
Windspeaker.com

The Conservation through Reconciliation Partnership has officially launched a new initiative titled the IPCA Knowledge Basket. It will provide resources through a database to communities and officials involved with Indigenous Protected and Conserved Areas (IPCA).

These are lands and waters where Indigenous governments have the primary role in protecting and conserving ecosystems.

"Indigenous governments are at the forefront of protecting the largest, healthiest and most biodiverse areas across Canada," said Steven Nitah, a former member of the Indigenous Circle of Experts and current member of the Conservation through Reconciliation Partnership Leadership Circle. He is also the managing director of Indigenous Affairs at Nature4Justice.

"The IPCA Knowledge Basket will help to strengthen their capacity to realize their visions and aspirations for the lands and waters they have been stewarding for millennia."

The IPCA Knowledge Basket is accessible to anyone and allows individuals to hear and see first-hand how conservation lands are established and maintained. In one of the links within the basket readers are introduced to guardians protecting conservation areas, including salmon streams guardians in Nuxalk territory in BC, and the guardians of Nan Ye Dah, BC, who monitor moose, caribou, grizzly bear and fish.

“The basket represents the strength and beauty we can create by weaving multiple knowledge systems together,” states the Knowledge Basket’s newly developed website at https://ipcaknowledgebasket.ca.

Nitah said the goal of the federal government is to have 30 per cent of the country, both water and land, under conservation guidelines by 2030.

“This is to support Indigenous Nations who want to protect their special places within their homeland,” Nitah said. “It’s not necessarily on reserve, but within their territory (to) take control of that area and manage it with their own laws and governance and sometimes in partnership with Crown partners to create these protected conserved areas.”

The IPCA was developed to support Indigenous leadership and conservation, specifically to support the implementation of the recommendations that came out of the Indigenous Circle of Experts working group in 2018. There were 20 members of the working group who developed the idea of having a central database to gather and share resources for other communities to reference when going through conservation processes or initiatives.

"This digital space is a much-needed and valuable resource that can support Indigenous communities as they work to reconcile with their hearts and feel their cultures, languages, practices, knowledges and ecosystems, while also upholding their rights and responsibilities," said Marilyn Baptiste, former chief of the Xeni Gwet'in First Nation, in a release. "This ultimately reflects true reconciliation."

The Knowledge Basket encompasses information and experiences from each community in one sharable space. It includes stories from councils on how they developed the programs in their communities, how the land is being used under the conservation titles, and the steps that each community took to get there. There are contact names, photos, legal documents, interviews and many other important pieces of information.

“The Knowledge Basket is a combination of all the different research that has been done. It’s got academic reports, government reports, case studies of Indigenous protected conserved areas and different governance and models,” said Nitah.

“There are over 500 pieces of knowledge that’s in there that can be used by Indigenous Nations, communities and their allies and anybody that supports Indigenous leadership and conservation,” he said.

As more communities begin to access the Knowledge Basket and use the information to begin to look at their own lands and the possibility of conservation, Nitah said the database will continue to grow with stories from other communities.

“They will look at how they can utilize that information to define their own initiatives,” he explained. “They aren’t starting from scratch.”

Nitah said there is now access to information to support Indigenous communities’ vision for IPCA creation and other environmental conservation or stewardship initiatives through the IPCA Knowledge Basket.

“Globally, the healthiest lands in the world right now are lands that are managed, owned or influenced by Indigenous peoples,” said Nitah. “What we do to nature is what we do to ourselves.”