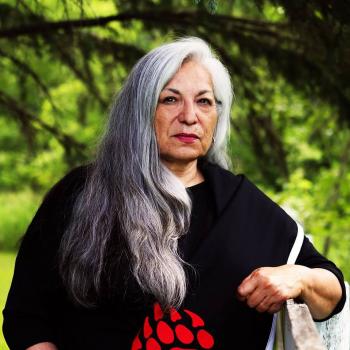 It is time for a woman to be national chief of the Assembly of First Nations, some believe.

“This is not about a gender issue. It’s about understanding that women have that innate sense and responsibility of family, which is inclusive of everyone,” said Katherine Whitecloud, former Manitoba regional chief for the AFN.

Whitecloud is one of two women and one of four contenders challenging incumbent Perry Bellegarde, who is seeking a second term in the position of national chief.

Whitecloud says she “received the messaging from our Elders and our knowledge keepers” to seek the top position.

“(They said) the need for change has to happen; that the need to concentrate on our sacred ones, our children, needs to happen. And that the home fires of our people are dimming due to the lack of inclusion of all of our people,” said Whitecloud, who is a knowledge keeper from the Mahpiya Ska Tiospaye.

Inclusivity is lacking in AFN itself, she said, with an organization that has adopted a western system of governance that pushes exclusivity instead of a traditional approach.

“Our people are very spiritual and we set that aside to follow a colonial system that is so foreign and only addresses spirit when it is convenient for them rather than as a daily thanking Creator for everything we have for life today,” she said.

In 2005, the AFN Renewal Commission released 47 recommendations to renew and restructure AFN. These included calling for a balance between traditional and contemporary practices, as well as a guiding role for a Circle of Elders, recommendations that “addresses that lack of spirit and spiritual leadership that was talked about by Elders,” said Whitecloud. The recommendations were never followed through.

She says chiefs and Elders have told her they see the AFN moving further from its role as an advocate organization and acting more like a government, making decisions that impact First Nations.

“Nationhood is determined by nations… determining for themselves who their leaders are going to be and how they’re going to move forward,” she said. “Only a nation can do that. An advocacy, a political organization, cannot do that.”

Defining an appropriate relationship between First Nations and the federal government is a priority for Whitecloud, who contends that the existing definition is one that has been determined by a settler interpretation of treaties.

“That is a huge issue in all of our relationships and I know that our leaders of the past and of today try hard to fit within that mould, but by doing so the original meaning (of treaty) as has been told to us by our knowledge keepers was lost and therefore we find ourselves in the predicament we are today. So the relationship first and foremost has to be addressed,” she said.

This relationship, she says, is part of the “big picture item” that Bellegarde has missed out on, even if he has “made strides” in closing the funding gap for some programs and services.

“We can talk programs, we can talk policy, but that still does not address our relationship with the government,” she said.  “It doesn’t address the fact that all the past policies and actions of government have been intended to strip our people of who they are and it hasn’t worked, but it has left our people impoverished and that needs to be addressed.”

Whitecloud is also wary of Prime Minister Justin Trudeau and his approach when it comes to dealing with issues that are important to First Nations, such as land, water and environment.

“He’s done what he wants to do after promising, giving his word and his honour to work with our people for those determinations to be made. He’s totally ignored it. So then I would question do his words have any real meaning? And he needs to think about that, given the assurances he provided to our people,” she said.

Whitecloud sets her top three priorities as 1.) the need to address the land base, as a means for economic prosperity, environmental stewardship, and space for growing populations; 2.) ensuring the opportunities and proper care for children; and 3.) the inherent rights for First Nations to enact their own governance systems, laws and jurisdictions.

These priorities are all interconnected, she said.

“In order for us to be a strong people we individually have to understand what our relationship is with each other, with the land, and with our Creator. We have to be strong as individuals so our families can become strong, so that our families contribute to the wellbeing of community, and community then can contribute to the wellbeing of nationhood and to our nations. That’s what it requires,” said Whitecloud.

Can the change that the AFN needs and the focus on concerns that First Nations people require come only at the hands of a woman?

“What has the male leadership done to empower children and empower families?” asked Whitecloud.

Chiefs and their proxies will vote for national chief on July 25 at the 39th annual general assembly in Vancouver.