Indigenous voters can play kingmaker in the federal election 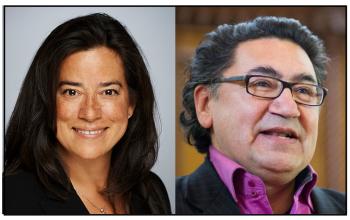 Though expectations are high that Indigenous representation in the House of Commons will bring progress on Indigenous issues, pundits say the reality is that change is incremental, though two recent MPs—Romeo Saganash and Jody Wilson-Raybould—were able leave a their mark on legislation.

This federal election sees a record-number of self-declared Indigenous candidates vying for seats in Ottawa at 77 and that could translate into a record number of Members of Parliament.

“I think until Indigenous people are elected they don’t really know the dynamics of being in caucus and being a part of a party,” she said.

She points to Jody Wilson-Raybould, who was recruited by Liberal leader Justin Trudeau, elected in 2015 in the British Columbia riding of Vancouver Granville, and appointed as Attorney General.

By the time Wilson-Raybould ran successfully for re-election in 2019 she had been expelled from the Liberal caucus and seeking a seat as an Independent.  Wilson-Raybould, who was a former Assembly of First Nations Regional Chief for BC and a lawyer, had plenty of experience in the political realm.

“She was confronted with a lot of issues. (She) had a very strong agenda, very motivated to create change for her people and was stymied within the Liberal Party in not being able to affect the change she wanted to see. She came out very vocally that there was no hope in changing the system from within,” said Skye.

Wilson-Raybould’s book “Indian” in the Cabinet: Speaking Truth to Power comes out on Sept. 14. The tell-all book will examine her experience in the Trudeau Cabinet and her struggles.

Wilson-Raybould is one of two Indigenous incumbents not running this time around. Eight incumbents are trying to win their seats again: six from the Liberals and one each from the New Democrats and Conservatives. Of those, four are Métis, three are First Nations and one is Inuk.

According to numbers confirmed by Windspeaker.com, the NDP leads this election with 27 Indigenous candidates; the Liberals have 25; and the Conservatives have five. Unconfirmed numbers have the Green Party at 11 and the People’s Party of Canada with four.

“I think the system as it exists is embedded with colonialism, systemic racism and white supremacy and it is very hard to deconstruct that internally,” she said.

“What I’m interested in is nationhood and governance and restoring our traditional practices and that’s the kind of thing that can only be done in our communities internally. So that’s where I put my attention to,” said Skye, who has never voted in a federal election.

She says there is enormous pressure riding on the wins of Indigenous candidates.

“I think there are very high expectations,” she said.

“The Indigenous MPs will always serve Canadian interests. The only time in history that we’ve ever seen an Indigenous MP who could serve Indigenous interests it was Jody Wilson-Raybould when she was independent because she didn’t have to follow a party,” he said.

Indigenous MPs can only make an “incremental difference,” he says.

That’s not a view held by Arlen Dumas, grand chief of the Assembly of Manitoba Chiefs, who points to the work accomplished by Abitibi—Baie-James—Nunavik—Eeyou NDP MP Romeo Saganash, who did not run for re-election in 2019. Saganash, a Cree lawyer, laid the groundwork for what eventually became Bill C-15, United Nations Declaration on the Rights of Indigenous Peoples Act. The bill was passed into law this past June.

“Individually people can choose to use the opportunity they have to advocate and change discussions and conversations.”

“All parties should consider the role that First Nations issues and electors play in the potential role of ‘kingmaker’ in the upcoming September 20, 2021 election. In this list, 10 seats are held by Liberals, 8 by New Democrats, 5 by Conservatives, and 1 by the Bloc Québécois,” says the AFN.

In the French debate tonight, “Indigenous peoples, cultural industries and cultural identity” is the issue, while tomorrow night’s English debate will address “Reconciliation.”

Sinclair points out that the Trudeau government served the interests of Indigenous peoples best in its second term when the Liberals sat as a minority.

“It’s worth noting they’ve passed the most amount of bills in relation to Indigenous peoples when they have the NDP in their government, propping them up.