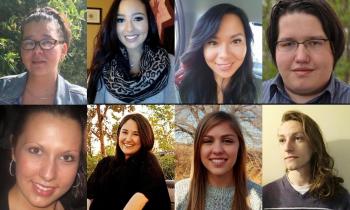 “Learning to Adapt for Canada's New Energy and Forestry Sectors”

“Indigenous Doulas for First Nations Women Who Travel for Birth”

“Clean Drinking Water in First Nations Communities: What is an Improved Model?”

What do you plan to do for your summer vacation? Some Indigenous scholars from the University of Winnipeg have their summers all figured out.

They will be serving on research projects as diverse as studying clean water on reserve to surveying the field of Indigenous comics and graphic novels.

The new Indigenous Summer Scholars Program will nurture the talents of senior undergraduate students and recent graduates by pairing each student with a faculty member involved in Indigenous research. And they’ll be paid to assist while learning new academic skills.

For the first two weeks of the program, starting June 12, the students participated in a series of workshops and events focused on enhancing academic skills and cultural practices and identity, including Elder-in-Residence teachings, and a sweat lodge ceremony held in community.

For the following eight weeks, students are members of research teams, each working on a research project under the supervision of a UWinnipeg faculty member.

Students are awarded $5,000 for their work over the 10 weeks. Projects range from developing an economic model for adequate water and sanitation facilities on First Nations reserves, to organizing intergenerational knowledge exchanges on climate change, to creating a searchable database of the Treaty Annuity Paylists now held in Canadian archives.

For the research project “Learning to Adapt for Canada's New Energy and Forestry Sectors,” Dr. Ryan Bullock, assistant professor in the Department of Environmental Studies and Sciences and director of the Centre for Forest Interdisciplinary Research, is teamed up with Miranda Hamilton. Hamilton is currently completing her Applied Bachelor of Science at both the University of Winnipeg and Red River College, majoring in environmental sciences.

Hamilton is the research assistant on the project, facilitating cross-cultural community resilience workshops to inform and influence northern policy development.

This project examines how to improve adaptive capacity in Canada's renewable resource sectors and regions. That means adjusting to climate change, moderating potential damages, taking advantage of opportunities and coping with the consequences. The project will focus on northwestern Ontario, northern Manitoba, and the Northwest Territories.

The second research project is called “Indigenous Doulas for First Nations Women Who Travel for Birth.” Dr. Jaime Cidro, associate professor, Anthropology is the principle investigator on a Canadian Institutes of Health Research-funded project looking at Indigenous doulas as a cultural intervention for First Nations women who travel for birth in Manitoba. Alexandra Fontaine is the summer scholar on this project. She is Anishinaabe from Sagkeeng First Nation and a recent graduate with a Bachelor of Arts in Indigenous Studies with a minor in Human Rights.

Most First Nations women who travel outside their home community to give birth will do so alone, or with limited social support. They experience isolation, boredom, stress and anxiety, which often results in a negative birthing experience and a range of poor health outcomes for both the mother and baby.

“Clean Drinking Water in First Nations Communities: What is an Improved Model?” is a project being led by Dr. Melanie O'Gorman, an associate professor of Economics.

Courtney Bear is the summer scholar assigned to the project. She has just graduated with a B.A. in Conflict Resolution and Criminal Justice, and is from Peguis First Nation.

The average Winnipegger uses about 180 liters of water daily. Some residents of Manitoba First Nations have less than 15 liters of clean water daily. This project aims to address the inadequate water and sanitation facilities on reserves in Manitoba by using existing research to develop evidence-based solutions.

Francine Laurin is the summer scholar on this project. She is an Indigenous graduate with a four-year Bachelor of Business with a double minor in Political Science and History. In the fall, Laurin will be attending Law school in the United Kingdom.

The goal of this project is to continue research regarding the impacts of climate change across the Canadian Prairies, specifically investigating opportunities to engage Indigenous communities through multi-media and contribute to the climateatlas.ca

Dr. Jino Distasio, director, Institute of Urban Studies, recently coordinated a six-year project on homelessness and mental health in Canadian cities. This work is part of a $110-million project funded by the Mental Health Commission of Canada and is the largest such project ever undertaken globally.

Dylon Martin is the summer scholar on this project. Dylon is a member of Barren Lands First Nation and graduated with a Bachelor of Arts in Economics from UWinnipeg.

The At Home Chez Soi project was a $110-million project that examined housing in five Canadian cities over a six-year period. Winnipeg was home to a unique approach that saw the local community take ownership of a largely American intervention by localizing it to fit the city’s context. This project will explore the early governance model used in Winnipeg and will include interviews, literature and data analysis, as well other means by which to explore the early phases of this landmark study.

“Improving Access to Historic Treaty Annuity Payments” is led by Dr. Ryan Eyford, associate professor, History. His research links the history of colonization in western Canada to the global history of settler colonialism, and brings together Indigenous and immigrant histories.

Ashley Courchene is the summer scholar. She has a Bachelor of Arts in Conflict Resolution and Psychology and one more year of the Honours Program in Psychology. Her goal is to pursue graduate studies.

Treaty Annuity Paylists are an important source in the study of Indigenous history, and are extremely valuable records for Indigenous people tracing their ancestry through colonial records. Beginning in the 1870s, the Department of Indian Affairs (DIA) distributed treaty payments, usually $5 per person annually, to members of First Nations in Manitoba and the North-West Territories (later Saskatchewan and Alberta) that had signed treaties with the Crown.

Each year, DIA clerks recorded the name of the recipient, usually a male head of household, as well as information about that person's family. This information is particularly valuable for First Nations in support of land claims and other Indigenous rights litigation.

This project partners with Canadiana.org to make information searchable. The project begins with the paylists for St. Peters, the original home of Peguis First Nation.

Janell Henry is the summer scholar and is from Roseau River First Nation. She is completing her Bachelor of Arts studying Psychology and Rhetoric, Writing and Communications. She freelances in media arts production while working with arts organizations around Winnipeg.

The goal is to develop a new methodology in the curation and coordination of public art exhibitions, using open-source digital media and design labs in urban Indigenous communities.

Taylor Daigneault is the summer scholar. He is Métis and working on undergraduate degrees in Arts and Education. He is also the incoming Education Director with the University of Winnipeg Students’ Association.

This project explores how contemporary artists and cartoonists use the form of comics to represent the lives of others through visual narratives that challenge the conventions of prose biographies.