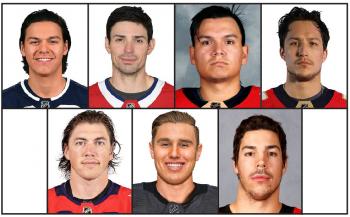 Update and correction, Nov. 12, 2021: Our story erroneously identified Seth Jarvis of the Carolina Hurricanes as being of Cree and Saulteaux ancestry from the Peguis First Nation. After a review with our sources, Windspeaker.com has confirmed that Mr. Jarvis is not Indigenous. We apologize for this error in our reporting and for any confusion or concern this error may have caused. We have removed Mr. Jarvis from this year’s list of Indigenous NHL players.

A record was in all likelihood established last month when 19 Indigenous players were among those attending National Hockey League (NHL) training camps.

Several of those individuals knew they would eventually be returned to their junior squads for more seasoning. And some others were sent to minor league affiliates.

It remains to be seen, however, when a few of these individuals will see their first action of the season.

A closer look at Indigenous players on NHL rosters follows.

Price, whose mother Lynda is the chief of the Ulkatcho First Nation in British Columbia, is undoubtedly still one of the game’s top goaltenders.

Price, 34, has spent his entire NHL career with the Montreal Canadiens. He was one of the main reasons Montreal advanced to the Stanley Cup finals this past season. The Canadiens were defeated 4-1 in the best-of-seven finals by the Tampa Bay Lightning.

Earlier this month, however, it was announced Price, who had off-season knee surgery, would be unavailable to play early on this season as he entered the league’s player assistance program for reasons not provided to the public.

Bear, who is Cree and a member of Ochapowace Nation in Saskatchewan, is toiling for a new squad this season.

That’s because the 24-year-old defenceman, who had spent the first four seasons of his pro career with the Edmonton Oilers’ organization, was traded to the Carolina Hurricanes during the off-season.

Bear welcomed the fresh start. He admittedly had a sub-par season last year on the heels of a breakthrough 2019-20 campaign with the Oilers.

Bear did not request a trade out of Edmonton, even though he received some post-season racist comments on social media this past May. The derogatory comments were linked to some fans blaming Bear for the Oilers’ first-round playoff exit.

Hamonic, a 31-year-old Métis who is a veteran NHL defenceman in his 11th pro season, was technically still on the Vancouver Canucks’ roster to start the year.

That’s even though he missed the entire Canucks’ training camp due to unspecified personal reasons.

On Tuesday of this week, however, the Vancouver franchise announced Hamonic would be on a temporary leave of absence to work through personal matters. The squad announced it would not provide any further details at this time.

Vancouver had high expectations for Hamonic this season as he was signed to a two-year, $6 million contract this past July.

Keeper is another Indigenous defencemen the Canucks are hoping will patrol the team’s blueline this season.

Keeper, who is from Pimicikamak Cree Nation in Manitoba, signed a two-year contract with Vancouver in July.

But the 25-year-old suffered a broken leg during the Canucks’ training camp last month. At the time it was uncertain whether Keeper would be on the team’s roster to start the year or whether he would begin the season with its American Hockey League affiliate, Abbotsford Canucks.

That question became moot when the Canucks placed him on their long-term injury reserve list earlier this month.

Montour, a 27-year-old Mohawk from Six Nations in Ontario, is in what he hopes will be his first full season in the Sunshine State.

Montour, a defenceman, joined the Florida Panthers this past year during a mid-season trade from the Buffalo Sabres.

Montour is considered a fabulous skater with plenty of offensive capabilities. He’s hoping he can find his game again with the Panthers and come close or surpass the standout season he had with the Anaheim Ducks during the 2017-18 campaign when he had NHL highs for goals (nine), assists (23) and points (32).

During last year’s abbreviated season he had 18 points in 50 games, splitting his time between the Sabres and Panthers.

Oshie, 34, is still considered one of the Washington Capitals’ offensive stars.

Oshie, who was born in Mount Vernon, Washington and has Ojibwe ancestry, is in his 14th NHL season. He spent the first seven years of his pro career with the St. Louis Blues before joining Washington in 2015.

Oshie entered this season having appeared in 955 NHL contests. Should he remain healthy, he will dress for his 1,000 NHL game at some point this season.

And he’s already achieved one pinnacle in his sport. He was a member of the Capitals’ 2018 Stanley Cup championship squad.

Whitecloud, a member of Sioux Valley Dakota Nation in Manitoba, is a 24-year-old defenceman with the Vegas Golden Knights.

Whitecloud is considered a late bloomer as he was never drafted by a National Hockey League squad.

After playing a couple of seasons with the Virden Oil Capitals of the Manitoba Junior Hockey League, he attended Bemidji State University in Minnesota.

His value skyrocketed during his first two seasons at the U.S. school to the point where almost all NHL clubs were seeking his services. Whitecloud ended up signing with the Golden Knights following his sophomore season.