Indigenous artists break free of the limits of the small box 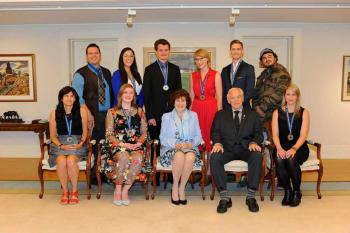 If there’s one thing award-winning multidisciplinary artist Jared Darcy Tailfeathers wants to stress, it’s that Indigenous artists should not be pigeon-holed.

He was one of 10 recipients of the Lieutenant Governor of Alberta’s 2018 Emerging Artist Awards, which carries a $10,000 individual prize. Tailfeathers was recognized by Lt. Gov. Lois Mitchell at a ceremony June 1 in Edmonton.

Tailfeathers said his work bridges cultures “and the idea of what being Indigenous really means.” Straddling that line is something he feels he has been doing his entire life, with his father from the Kainai Nation and his mother Caucasian.

Tailfeathers grew up mostly in Calgary, where he continues to live. Over the last couple of years, he’s worked with Indigenous Resilience in Music, which promotes collaboration between Indigenous and non-Indigenous musicians and artists, and he teaches at the School of Rock, which ties in nicely with his philosophy. The school focuses on bringing kids together at a young age to get to know each other and to collaborate on work.

The prize money will allow Tailfeathers to finish a number of musical projects, as well as complete a six-part crime noir comic book series entitled “Spite,” and publish his novel.

Tailfeathers says Indigenous artists, including himself, often struggle with whether they are Indigenous first or artists first.

“It’s always been more important to me to make good work,” he said.

"Gods Acre" is the story of an older Aboriginal man being forced to adapt to the effects of climate change, which has altered the way people live, bringing droughts and floods. Yet the man continues to live alone in the wilderness like his family did before him.

In Calgary on June 2, Norma Dunning, an Inuk scholar and researcher, received a 2018 Alberta Literary Award for her short story “Elipsee”. She received the Howard O’Hagan Award, which comes with a $700 prize. 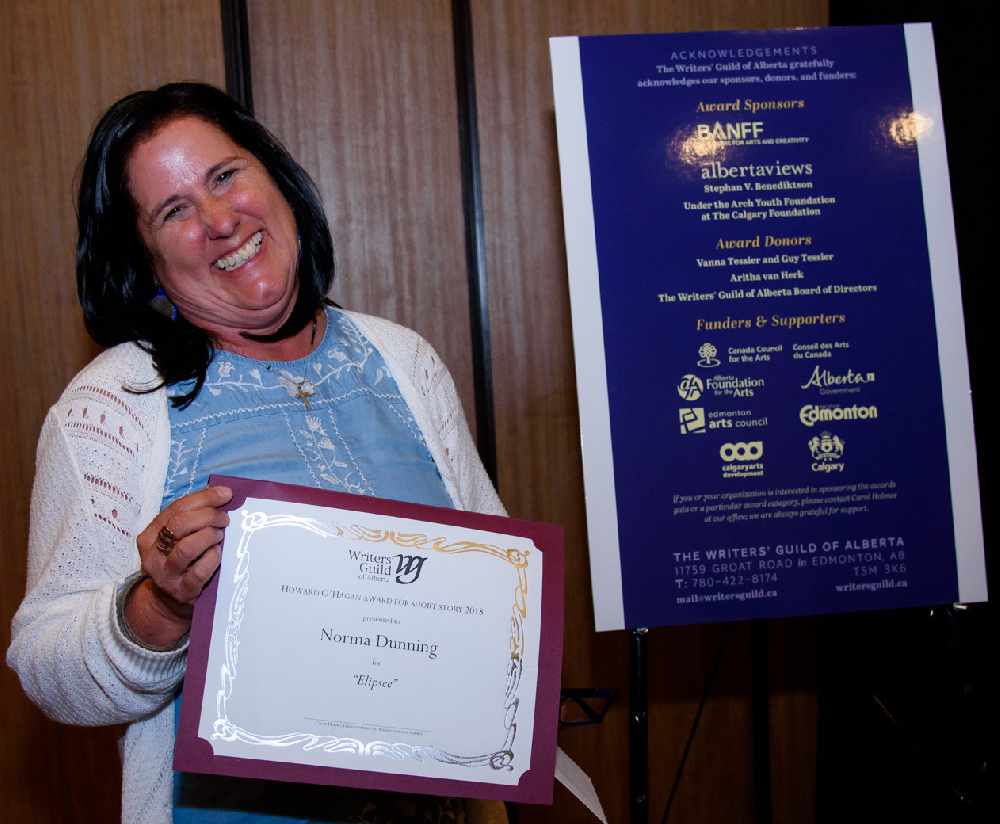 “Elipsee” is one of 16 stories in Dunning’s collection Annie Muktuk and Other Stories. It is the third award Dunning has received for work in the collection.

“I wanted to bring Inuit into present day and when you read “Elipsee” you’ll see it was written in present day,” she said.

“As Aboriginal artists there’s that expectation that you’ll only stay in the past and … It’s like we can never be modern-day artists or people, and I wanted to bring that slant into my work,” said Dunning.

Annie Muktuk and Other Stories has been shortlisted for other upcoming awards: the 2017 Danuta Gleed Literary Award and the Foreward INDIES Book of the Year Award, and INDIEFAB Book of the Year Awards (Short Stories). Dawn Dumont, Plains Cree from Saskatchewan, has also been shortlisted for the Danuta Gleed award for her interconnected stories in Glass Beads.

Annie Muktuk and Other Stories is also one of three works shortlisted for the Robert Kroetsch City of Edmonton Book Prize. Joining Dunning as a finalist is Billy-Ray Belcourt of Driftpile Cree Nation. On June 7, Belcourt’s This Wound is a World was selected as the Canadian winner of the 2018 Griffin Poetry Prize, collecting $65,000. The Edmonton Book Prize winner will be announced June 25.

“I think why (Annie Muktuk) appeals to readers is that it’s unique to have an Inuit prose writer, who is not writing based on legend or telling an autobiography,” said Dunning. “I hope people can think of Aboriginal writers and artists in a present day context and modern context.”

Annie Muktuk and Other Stories expounds on Inuit women empowerment. The collection comprises both happy and sad stories, a mixture of present day and the past, and has a touch of humour. Dunning sees her work, which took her several years to “collect” as she was attending the University of Alberta and continues there as a doctorate student, as honouring her ancestors.