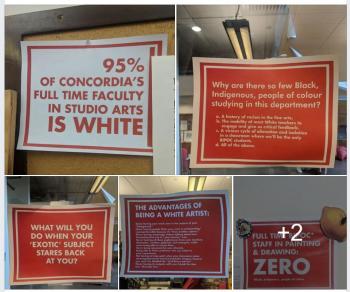 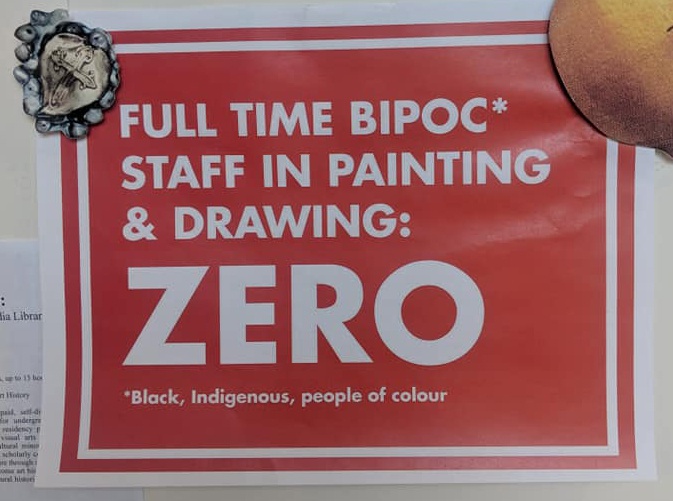 The posters on the walls at Montreal’s Concordia University in the Fine Arts department are stark and to the point: “Fulll time BIPOC (Black, Indigenous and persons of colour) staff in painting and drawing: Zero” and “95 per cent of Concordia’s full time faculty in Studio Arts is white.”

Whether at Concordia or at any other university in the country, there is much truth in the statements. Indigenous people are surely under-represented in professorial roles in institutions of higher learning.

A report released this past April by the Canadian Association of University Teachers (CAUT) indicates that only 1.4 per cent of professors in universities and colleges are Indigenous compared to the 3.8 per cent of Indigenous people who make up the general labour workforce.

This finding is not surprising to David Newhouse, Indigenous representative at large on CAUT. Newhouse is also chair of Indigenous Studies and associate professor at the School of Business at Trent University in Peterborough, Ont.

“There aren’t a large number of Indigenous people with doctorate degrees,” said Newhouse, who is Onondaga from the Six Nations of the Grand River.

While there is an increase in Indigenous students enrolling in undergraduate programs, that isn’t the case for those going onto graduate school. Professors need to hold Ph.Ds.

“We need to find a way to support our students,” said Newhouse, who notes that funding is an issue. Bands often don’t have the money to finance their members beyond an undergraduate degree. The federal government needs to be lobbied for more funding, he says, as do banks and organizations, like Indspire, which provide scholarships and bursaries.

Trent University, a small post-secondary institute with about 500 students, offers guaranteed funding for eligible graduate students for limited master and doctorate degrees. More than that, says Newhouse, the university reaches out to students it thinks may be interested in continuing their education.

This week, the University of Regina is completing its third and final week of a pilot program aimed at increasing the Indigenous-centred research skills of undergrad students. Of the 19 students enrolled, 10 are Indigenous, including one from the Sami Nation in Norway and three from Mexico. Come September, the students will be in their final year of their four-year undergraduate degree.

Not only are participants learning about Indigenous research methodology, implementation and theory, but they’re also working alongside scholars, community researchers and grad students, all of whom are Indigenous.

“We’re hoping that that inspires the students to go on to grad school, but also that it demonstrates how research really can have positive impact on communities,” said Emily Grafton, executive lead, Indigenization, for the University of Regina.

Grafton, who is Métis, says it is also the hope that some of these students consider becoming professors.

“I think from what I’ve read, what I’ve heard from other people, from what I’ve experienced myself, if you have people who have those lived experiences, especially around things like an Indigenous knowledge system – that’s not something you can just pick up and learn from a book. You really have to have that lived experience – I think it’s really important for them to be able to do justice for the demands of the curriculum,” she said.

Grafton has been in her position since summer 2016, the same year Dr. Shauneen Pete, associate professor (on leave) in educational administration and educational core studies and member of the Little Pine First Nation compiled “100 ways to Indigenize and decolonize academic programs and courses.”

While Grafton says she has not been tracking the implementation of Pete’s suggestions, she has heard them referred to both on campus and at national conferences. She says they also fit into the university’s strategic plan.

As for hiring more Indigenous professors, Grafton said, “All universities in Canada are trying to address this gap because it’s not a perceived gap. It’s real, and the (Truth and Reconciliation Commission) and other pressures for decolonization are allowing institutions to recognize that gap and I think people are answering the call to start filling it.”

“Indigenization is not just the work of Indigenous people. It has to be the work of the entire institution,” said Newhouse.

Unique about the call, says Jeffrey Berryman, who was coordinator for the program, was that the scholars could apply to teach in any faculty. The move to hire the Indigenous professors came as a result of discussions between the university and its professors’ union about equity issues coupled with the work of the TRC.

This fall, the five new Indigenous professors – all of whom have doctorates - will begin teaching classes in English, Philosophy, Political Science, Women and Gender Studies, and Psychology, all within the Faculty of Arts, Humanities and Social Sciences, the university’s largest faculty.

That brings the total of declared Indigenous professors to nine, representing two per cent of the full-time faculty complement. The University of Windsor has a student population of about 15,000. Of the 11,000 undergraduates only 135 are Indigenous.

“We’ve always had, like any other public university, equity obligations. We are hiring more faculty as things go on and the School of Social Work is advertising for a position in Indigenous social work,” said Berryman, who is also associate vice-president academic and law professor.

Berryman says the expertise the Indigenous professors bring with them will go beyond their classrooms.

“One part of the having the five Indigenous scholars is to use that as a way to, as a sort of catalyst in various programs, to move Indigenous issues into curriculum discussions,” he said.

While all professors, Indigenous or non-Indigenous, are involved in teaching, researching, and serving on university or governing bodies, Indigenous professors often have a heavier workload.

“In many cases because there are so few of us we’re called upon to take part in many committees. So the workload for Indigenous faculty is much higher because there is a large community component to it that doesn’t always exist for other mainstream faculty members,” said Newhouse.

Indigenous scholars work within Indigenous communities and organizations to undertake social justice work as well as gather information, statistics and research for government grants. They also mentor and support Indigenous students on their campuses.

The conference has been running for about a decade, held every two years. Newhouse has been involved since the beginning and says he has seen a “noticeable change” in the academic life of Indigenous faculty and feels it’s due, in large part, to the universities responding to the Calls to Action from the TRC.

“The heavy workload is still being carried but at least there’s an awareness now. We’re beginning to talk about how it can be changed. We’re trying to make sure that we just don’t have a sole Indigenous member inside a department or program because that puts an unreasonable burden upon people,” he said.

Newhouse will be heading a study this fall to gather information on the work undertaken by Indigenous faculty in universities in Ontario. The study is a joint effort between the Council of Ontario Universities and Ontario Council of Academic Vice Presidents. The data will be presented next spring.

Newhouse doesn’t believe that the demand on their time is dissuading Indigenous people from becoming professors.

“I think people are attracted to the profession because of what they can do. Every Indigenous professor that I know of is working to make things better for Indigenous people,” he said.