Impact of wildfire on Indigenous residents to be studied 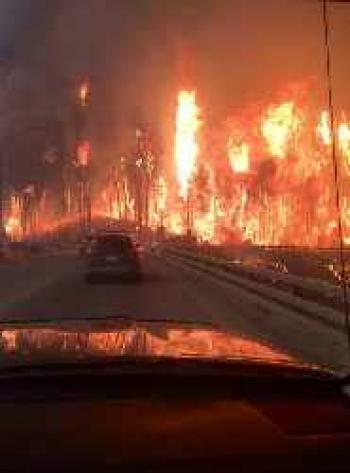 Located in downtown Fort McMurray, the friendship centre was threatened by the fire that ravaged the area.

The effects of the massive wildfire last year on Indigenous residents and communities in the Regional Municipality of Wood Buffalo will be the topic of research over the next two years.

It’s a subject that touches Teresa Nahwegahbow both professionally and personally as the executive director with the Nistawoyou Friendship Centre.

Professionally, her friendship centre will be a community partner in the study, which will examine how Indigenous residents and communities were impacted by the evacuation and recovery process, looking at their physical health, mental health and resilience.

The friendship centre was on the frontline as the point of re-entry for Indigenous residents in June 2016, as the Métis Local 1935 office was destroyed and the Athabasca Tribal Council’s office couldn’t be accessed in its Waterways location. It was one of the three neighbourhoods largely impacted by the May 2016 fire.

Indigenous peoples accessed such services as Red Cross, the distribution centre and health care through the friendship centre.

Located in downtown Fort McMurray, the friendship centre was threatened by the fire that ravaged the area, but in the end suffered only minimal smoke damage to the top floor. But staff and board members weren’t as lucky. Two staff members and four of seven board members lost their homes.

And so did Nahwegahbow and her husband, who lived in Abasand. They now rent a downtown condo from a friend.

Nahwegahbow said that when she was approached by study-lead Dr. Stephanie Montesanti, assistant professor in the School of Public Health at the University of Alberta, to participate in the project, she was excited about the process.

“It’s very community-driven, it’s very grassroots-driven and it’s all about community engagement and asking the community what they think of trauma and resiliency and recovery in their terms. I find that’s really good. It’s taking away that image of ‘we know what’s best for you, so we’ll design something.’ I really like that,” said Nahwegahbow

Indigenous peoples are an often overlooked population by the mainstream media as well, says Montesanti, whether it is the 2016 fire or the 2013 flood in southern Alberta.

Montesanti worked closely with the Siksika Nation and Stoney Nakoda Nation following the 2013 flood to document their recovery process. She says the Fort McMurray wildfire is an opportunity “to build on the lessons learned from the flood” and to do similar research on the impacts on Indigenous residents and communities.

“We need to build capacity and knowledge in the area of Indigenous disaster emergency planning,” she said.

The Athabasca Tribal Council is also an Indigenous partner in the wildfire project.

Montesanti is joined at the helm by Tara McGee, with the Department of Earth and Atmospheric Science at UAlberta. McGee is an expert on wildfire research on First Nation communities.

“The impact to community needs to be known. We need to study that impact. From a research perspective we’re starting to build more knowledge and evidence to understand what those impacts are, as well as understanding resilience and what resilience means within an Indigenous lens,” said Montesanti.

One impact on community that Nahwegahbow notes is the loss of Elders. Many were displaced and chose not to return to Fort McMurray.

“That’s been difficult, just the loss of some of our ceremonial Elders and our cultural Elders and the service they provide to our community,” she said.

The project will begin with learning circles with Elders, adults and youth to talk about resilience and coping in the aftermath.

School-aged children and youth will be a particular focus of the study, says Montesanti, hearing their stories and what it means to them a year after the fire.

A child and youth resiliency conference is planned for fall 2017 in Fort McMurray.

Also to be examined will be the health concerns for which Indigenous peoples accessed services. Montesanti points out that communities like Fort McMurray First Nations were evacuated primarily because of smoke concerns. The study will see what kind of physical care and mental care were documented.

And even though the friendship centre made health services available, healthcare workers’ lack of knowledge about the urban Indigenous experience was a concern, said Nahwegahbow.

She is hopeful that the study will make health service providers aware that there are “significant gaps” in some of the services offered and talks can begin to address those gaps.

Both federal and provincial government departments are involved in the work that will be undertaken, including Indigenous Health with Alberta Health Services; Health Canada First Nations and Inuit Health Branch (Alberta Region); and the First Nations field officer with Alberta Emergency Management Agency.

In fact, with government involvement, Montesanti says this data – along with the data collected from the 2013 flood – offers a unique opportunity to create a provincial model for Indigenous disaster and emergency planning.

And “to build greater knowledge and capacity amongst our policy leaders and decision makers as well as our emergency responders on how to collaborate with and work with Indigenous peoples to address the impact within their communities.”

Montesanti says the interdisciplinary approach to the study will provide strong results.

A blessing ceremony to begin the study is tentatively scheduled for April 22, Earth Day, in Fort McMurray.

Data collection is projected to begin in May. This process is expected to take 18 months. Along the way and at the conclusion, the information will be shared through community meetings in Fort McMurray.