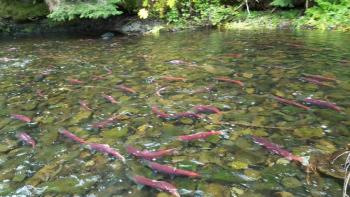 “We will wait it out,” said Hereditary Chief Calvin Hyzims, who calls the blockade “illegal.”

Dale Good, hereditary chief of the Gitsegukla Wilp's House of Wii Gyet, issued a statement on June 12 claiming the territory being logged belongs to his House and their consent has not been given.

“For the Gitxsan people, the Wilp and clan are the two most important units of society. A person is born into a particular Wilp and clan… Kinship organizes most aspects of life, including property ownership,” reads the Gitxsan.com website.

Logging of the approximately 10-mile strip, located about 20 minutes from Hazelton, has stopped since Good blockaded an access road with a tarp on June 2, and had logging contractors removed from the land.

“I’m willing to sacrifice being arrested and jailed if that’s what it takes to stop this. I have nothing left to lose,” said Good.

Oral history and documents from the Gitxsan library and archives support his House’s claim to the land, he said.

Not so, says Hyzims, who along with Hereditary Chief Vernon Smith, gave the go-ahead for the logging. The territory is also claimed by Hyzims and Smith, who are hereditary chiefs from the neighboring Kitwanga First Nation, reads the statement from Good.

“We own the territory and we have a say on what happens on the territory,” said Hyzims. “They don’t even own it at all. They are actually trespassing with their blockade.”

Good said in his statement that he had sought to resolve the issue through diplomatic channels.

But, says Hyzims, there are no issues to resolve. “They don’t need to do anything else except watch what’s happening.”

Good’s concern, however, is that the logging threatens seven fishing sites. Good asserts he’s not willing to watch the destruction of the land.

“If this in our territory is allowed to be logged then our House’s children will inherit lands left bare by logging and will have food stolen right from their mouths,” said Good, who is a father of five and grandfather of eight.

“It’s the same feeling as coming home and finding it is being burglarized,” Good said. “Only now I’m watching who is doing it and it’s our own people, and as a hereditary chief of a House it makes me frustrated and angry.”

Hyzims says the Gitxsan Hereditary Chiefs Council has discussed the issue and have confidence their customs will resolve it.

“They usually have the Father Clan speak to the House group and they talk to their children. According to our law, whoever takes on the chief name of the Father Clan is the one responsible for telling them what they’re doing is wrong,” said Hyzims.

The Father Clan, he said, is the Frog Clan of Gitanyow, and that means Good doesn’t have the right to enact a blockade.

If the Father Clan doesn’t take action, Hyzims says, he doesn’t know what will happen.

He says the chiefs will take their cues from the loggers, who will determine how long they are willing to wait before removing their felled logs. Good said while the Gitxsan Forest Enterprises Inc. and Gitxsan Development Corp. own the licence to log the territory, the entities have subcontracted the logging.

Hyzims says the chiefs’ council met with the head of the logging company last week.

“I don’t know what actions will be taken. I’m still not clear what decision has to be made, but we’ll see what happens in the future,” he said.

In his statement, Good said he was “exploring legal options.”

“It should never have been allowed to come to this but it has,” he said. “We’re entrenched, and it’s not criminal to fight for what is ours.”