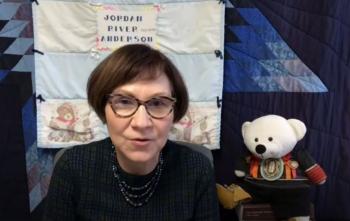 “It is only when that binding agreement has been written and signed by the Government of Canada and acted upon with great haste that First Nations children, youth and families will have a measure of assurance that actionable change is coming.” — Cindy Blackstock
By Shari Narine
Local Journalism Initiative Reporter
Windspeaker.com

Hours after the federal government and First Nations leaders signed agreements-in-principle worth $40 billion to address the discrimination in the First Nations child welfare system, Cindy Blackstock tweeted a promise to young people—“we will keep working.”

Blackstock, executive director of the First Nations Child and Family Caring Society (FNCFCS), was notably absent from the Jan. 4 news conference, which included three federal ministers and representatives from the Assembly of First Nations (AFN), the Chiefs of Ontario and Nishnawbe Aski Nation.

Discussions with these four First Nations organizations, along with legal counsels for the Moushoom and Trout class actions, brought about the agreements that led to yesterday’s announcement. The agreements commit $20 billion to compensate children and their families and caregivers wronged by the child welfare system and the narrow implementation of Jordan’s Principle, and $20 billion for long-term reform of the chronically underfunded family and child welfare system.

Jordan’s Principle was put in place to ensure First Nations children received medical care without the delay caused by federal and provincial governments haggling over who would pay the bill.

Last night, Blackstock tweeted a letter that she had written to impacted youth “when things were quite uncertain.”

The letter is dated Nov. 12, a day after it was announced that Murray Sinclair, the former chair of the Truth and Reconciliation Commission on the legacy of Indian residential schools, would be leading the out-of-court negotiations on the child welfare file. Dec. 31 had been set as the deadline for agreements-in-principle to be reached.

In her letter, Blackstock said justice would be achieved “when you don’t have to worry so much about the government hurting you or your children one day because they show us all that they learned from this….”

In a statement from the FNCFCS Jan. 4, Blackstock stressed that she was still looking for “actionable change.”

“It is only when that binding agreement has been written and signed by the Government of Canada and acted upon with great haste that First Nations children, youth and families will have a measure of assurance that actionable change is coming,” she said in her statement.

Blackstock said that in January, there will be a legal consent order going to the Canadian Human Rights Tribunal (CHRT) to push the federal government to provide adequate funding for youth aging out of the system at 18 years. The consent order also outlines additional prevention funding for families at $2,500 per person. Ottawa will be expected to ante up the funding set out by the consent order as of April 1.

The settlement amount of $20 billion will be used to compensate in excess of 215,000 First Nations children and an unspecified number of their family members. They will receive a minimum of $40,000, as laid out by the CHRT, while those who were significantly harmed will receive more.

Blackstock said the federal government needed to be held to task to ensure they paid that money to individuals, as well as putting some of  it into a trust for when the children became adults.

“And that there is some real thought given to how to structure the payment so that when they're going to vulnerable young people that they're not deepening that trauma that they may be experiencing,” Blackstock said on CBC Power and Politics yesterday.

She added that FNCFCS had worked with First Nations youth on a plan to provide supports and she hoped Canada would implement that plan.

The agreements-in-principle must be approved by the federal court and the CHRT. It is hoped this can be accomplished in 2022.

“I work on change at the level of children. That has always been my guide. If we see them really land these major supports for families and for young people in care on April 1st that'll be a big step forward,” she said.

Blackstock called the Government of Canada a “repeat offender when it comes to First Nations kids,” pointing to the legacies of residential schools and the 60s Scoop. She noted that First Nations children are 17.2 times more likely to be in foster care and it was due to poverty, inadequate housing and caregivers who suffered multi-generational trauma and domestic violence.

It’s been a long battle for Blackstock, who began action with the AFN in 2007 filing a complaint with the CHRT alleging the federal government discriminated against First Nations children on the basis of race, national or ethnic origin by providing inequitable funding of child welfare services on reserve.

In 2016, the CHRT found the federal government had discriminated. The decision was appealed by Canada and dismissed by the federal court in September 2021. However, Canada filed a further appeal with the Federal Court of Appeal on Oct. 29, 2021. Justice Minister David Lametti said when a final agreement was reached, the government intended to drop the appeal.

Blackstock said the government had to continue to be held accountable.

“I think without the Canadian public kind of asking more questions about what is happening for First Nations children today, I don't think we would have been at this place. But it's too soon for the Canadian public to think that this problem is solved because no child's life has been changed today. There's good words on paper, but nothing is changed for children. We have to pay attention until that discrimination ends and until the government reforms itself so that it doesn't do this again,” said Blackstock.