Gentle truth-telling: How to talk to our youngest community members about residential schools 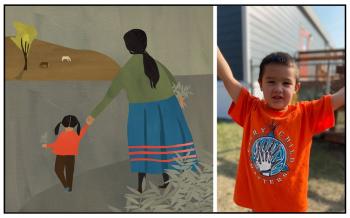 “When we talk about residential school with our littles, we approach it by first talking about what we absolutely love about our school.” — Chantelle Colthorp
By Odette Auger
Local Journalism Initiative Reporter
Windspeaker.com

Families are struggling to know how to talk with their kids about residential schools. The news keeps coming in waves as many hundreds of children’s graves are recovered at residential schools across the country, and those waves will continue to crash on the shores.

For some families, this is the first time the conversations about residential schools are coming up, whether it’s because of the silence of school curriculum, the silence of trauma, or just the simple fact that a child is only now old enough to start asking questions.

“Readers begin to understand that it wasn't only one legislative decision in this country that has had significant harm and trauma to Indigenous children, families and communities, ultimately harming the relationships between Indigenous and non-Indigenous people. And that's a big part of our healing today,” Smith said.

Smith grew up in her mother’s house, which had a residential school in view, so she always knew about them. The way her mother raised her is why Smith now knows how to find ways for gentle truth-telling.

Smith was raised to be respectful, kind and to tell the truth. Her teachings include raising children to be able to make their own decisions for themselves at a very young age. Smith explained this isn’t the same as hands-off, zero guidance.

“It's more like we're raising them (to) know that they walk in the world as an individual who is surrounded by family and community,” she said. “There are responsibilities in the way they walk in the world. And if we wait until they're 18 or 21 for that to happen, I think we miss a beautiful opportunity in mentoring them.”

She feels it’s her responsibility to provide gentle door openers for conversations and sharing hard truths of our collective history. She provides these concrete tips for creating safer spaces for these conversations happen.

“That's why I think this was such an awakening right now. Because the truth is being told, the love is being felt. That's why we have to make sure that the sacredness of those feelings is held up with dignity and that we listen.”

Having lunch while listening to the radio, listeners were calling in, asking what they could do. Smith’s mother, Shirley Smith observed, “We just want to be heard.”

“Hold space for those stories to be heard, honored and respected,” said Smith.

For her, “reconciliation means making the invisible, visible.” This means allowing truth to surface, giving space for feelings held back and amplifying voices long silenced.

Talking to the youngest in our community

Starting this journey can feel like a big hurdle. Our youngest community members also hear snippets of news or overhear older kids talking.

Aboriginal Head Start’s child-centred programs set a goal of serving as a ‘village’ in the sense there is a shared care and responsibility for children by family, community Elders, and teachers. The intention is to replace and reclaim what residential schools took away.

“The government and churches defiled the sacredness of the child,” reads “Restoring Our Spirit”.  “When they threatened the parents and took their children, they pierced the hearts of the family. The spirit of the Village was gone.”

“When we talk about residential school with our littles, we approach it by first talking about what we absolutely love about our school. We go around the circle and ask, what do you love about HeadStart? Sometimes it's food. Sometimes it's the singing and the dancing, or learning to speak in Cree or Michif.”

These conversations had a foundation to work from with similar conversations occurring on Orange T-shirt day, which commemorates residential school survivors and their experiences.

Colthorp’s staff move smoothly from celebrating what the young ones love about their school, to recognizing that, in the past, these things were not allowed at residential schools. There is a factual but careful sharing that “kids their age went to schools that didn’t allow them to sing in their language and they didn't allow them to go to powwows, hoop dance or jig.”

Since the children are so young, that’s as far as the conversation goes, she says. It’s presented as “Did you know?” and focus on the celebration that happens when children come together.

Indigenous Liaison and educator Danita Bilozaze was with middle school age students when she heard news of the recovery of 215 graves at Kamloops residential school.

“I really struggled with teaching kids the history, because it's so dark and heavy. I had this feeling of like, who am I? I never went to a residential school, so who am I to speak to these things?”

Her mom gave her advice—Talk to Aunty Vi. Her aunt was the first one to courageously share her true experience of residential schools with Bilozaze.

Her aunt also released her from that feeling of it not being her place to teach this history.

“It really has impacted everybody. I understand people not wanting to dive into these hard conversations. While I was learning, it's just absolutely heartbreaking. My daughter was only four at the time, and she would ask, ‘Mommy, why are you crying?’ To be a mother, thinking of how children were treated, her own family members, was overwhelming,” said Bilozaze.

“I said, Aunty Vi shared with me a story of how she was mistreated when she went to school. I didn’t tell her details. I made sure to tell her children have human rights. This cannot happen again. It was important she knew she was safe.” It was an unfolding. Every year as her daughter grew she would learn a little more.

This was the foundation of how Bilozaze taught herself how to talk with her students.

“I had to make sure that her takeaway is that she's protected now, because I think that's an important thing when you're talking about traumatic events.

“Especially for Indigenous students, they need to feel that safety and protection that there are laws and human rights to protect them.”

Now her daughter is 15 and it's the same creating of space when they are going to have these conversations. All the electronics get turned off in the house, and it’s a time for focused talk.

Bilozaze looks to the medicine wheel for direction and weaves this deftly with her understanding of child development.

“If you look at the medicine wheel, this is where they are with their understanding. They want independence.”

When the next wave of news stories hit about the Cowessess First Nation’s recovery of 751 graves, Bilozaze went into her class prepared.

“I had a news article on the projector up behind me and I said, ‘We are going to talk about some really difficult things. Some of you are babysitting other kids. Some of you are being trusted to be by yourself.’ They're really learning to be independent people.”

It was an emotional conversation, and Bilozaze says it’s important her students see her as a human, having her emotions. It models a healthy reaction and creates space for them to safely express themselves.

Bilozaze says a lot of people shy away from it because they don't want to cry in front of somebody.

“Somehow in our society, it's frowned upon. And I look at it differently, because it's part of being human.”

She was curious to know how many of them had had conversations about residential school, and not a lot of her students put up their hands up.

“And I asked, ‘What do you think we're protecting you from?’”

One student shared it felt like adults at the school “are just protecting them from the truth.”

That’s where Bilozaze hoped the conversation would turn. “How are all we Canadians going to get to reconciliation if we can’t talk about the truth?”

“If we don't talk about these stories that have happened and that are unfolding in this historic time, how are we ever going to get there together?”

Bilozaze said it’s essential to have a strong grasp on the behaviour in a class when educators try to share films about residential schools. It can really backfire, she notes, if crude comments or behaviour is allowed to bubble up. Especially when Indigenous students are in the room, left to navigate the opened conversation in a poorly managed classroom.

“That environment of safety, that's your foundational piece right there,” she said.

Bilozaze takes care to check in with Indigenous friends, neighbours and students. She thinks of youth who live with family members who went to residential schools.

“They’re living with this sadness, and am I the only adult who’s asking how they are coping?”

It’s important it is a two-way conversation, said Bilozaze. Kids will talk openly about how they're feeling about it, and that’s also part of the story, she said.

She shares the 150 acts of reconciliation with students, as something tangible.

“These kids are future leaders. What are they going to do with this information now? So are we just going to hit them with this traumatizing information and leave them there?

“Or are we going to encourage them to go out and make a difference in the world?”

For more information: CBC has compiled a lists of books for children and youth as a resource.