Five per cent procurement commitment is the ‘floor not ceiling,’ say feds 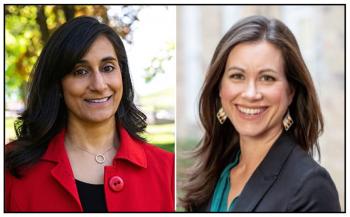 Anita Anand, minister of Public Services and Procurement, and Tabatha Bull, president and CEO of the Canadian Council for Aboriginal Business.

“Recognizing the talent, innovation and potential of Indigenous businesses by opening up the procurement process is part of a larger overall effort to close the economic gaps between Indigenous people and non-Indigenous people in Canada.” — Pam Damoff, parliamentary secretary to the minister of Indigenous Services
By Shari Narine
Local Journalism Initiative Reporter
Windspeaker.com

The federal government has pledged to build on the 38 procurement contracts worth approximately $126 million that were awarded to 30 self-identified Indigenous-owned and -led businesses during the coronavirus pandemic.

“Our commitment to providing inclusive economic opportunities will not end when the pandemic does, particularly for Indigenous peoples across this country who should be included in Canada’s procurement supply chain in a more deliberate way,” said Anita Anand, minister of Public Services and Procurement.

Anand announced on Aug. 6 that her government was implementing a mandatory requirement for all federal departments and agencies to award a minimum of five per cent of the value of contracts to businesses managed or led by Indigenous peoples.

The new requirement will be phased in with full implementation expected by 2024. There will also be mandatory public reporting of progress against that target.

“To be clear, five per cent is the floor not the ceiling when it comes to ensuring Indigenous-owned and -led businesses are full partners in government contracting,” said Anand.

She also announced a commitment of $35.2 million over five years from Indigenous Services Canada to modernize the Procurement Strategy for Indigenous Business (PSIB).

“(This is) something that has the potential to support generations of Indigenous businesses and communities to not only close the socio-economic gap, but to regenerate the wealth that has been lost and to move us towards Indigenous prosperity,” said Tabatha Bull, president and CEO of the Canadian Council for Aboriginal Business (CCAB), who joined Anand in Toronto for the announcement.

“This is the progress that we’ve been striving for and through continued collaboration we can ensure that these measures have a lasting impact that ensures both the Indigenous economy and that of all of Canada prospers,” said Bull.

Bull referenced a report released by CCAB in 2019 that analyzed the potential of Indigenous businesses in the federal supply chain. That report Industry and Inclusion: An Analysis of Indigenous Potential in Federal Supply Chains, indicated that Indigenous companies had the capacity to supply more than 24 per cent of the goods and services purchased by the federal government.

A 2020 report from CCAB, National Perspectives on Indigenous Prosperity, held that if the federal government met its five per cent procurement target it would mean an annual flow of $1 billion to Indigenous businesses.

That’s a figure Anand also noted as the outcome of the “anticipated initiatives” although government contracts varied from year to year, she said.

Pam Damoff, parliamentary secretary to the minister of Indigenous Services, called the mandatory target of five per cent a “transformational change.”

“We know … there’s an under-representation of Indigenous businesses in the federal procurement process. These new changes will help businesses compete for federal contracts,” said Damoff.

“Recognizing the talent, innovation and potential of Indigenous businesses by opening up the procurement process is part of a larger overall effort to close the economic gaps between Indigenous people and non-Indigenous people in Canada,” said Damoff.

The changes are the result of engagement conducted over the last three years and more recently through advice received by the Indigenous Reference Group, which includes representatives from CCAB, the National Aboriginal Capital Corporations Association, the Council for the Advancement of Native Development Officers, the Assembly of First Nations, the National Indigenous Economic Development Board and the Métis Nation of Alberta. Bilateral engagement also took place with Inuit Tapiriit Kanatami and the Native Women’s Association of Canada, says the government in a news release.

In 2019, Prime Minister Justin Trudeau’s mandate letter to Anand outlined the need for her department to “work with the Minister of Indigenous Services and the President of the Treasury Board to create more opportunities for Indigenous businesses to succeed and grow by creating a new target to have at least five per cent of federal contracts awarded to businesses managed and led by Indigenous Peoples.”