First Nations taking control of providing Internet to their communities 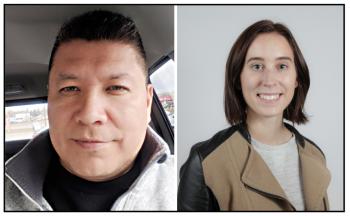 Derrick Houle, CEO, and Chelsea Mills, director, both of the Mamawapowin Technology Society.

“It’s inspiring to see communities across the country taking Internet access into their own hands. More than ever, it is an essential service and CIRA is committed to help improve access for all.” — Byron Holland, president and CEO of the Canadian Internet Registration Authority
By Sam Laskaris
Local Journalism Initiative Reporter
Windspeaker.com

For the second time since 2019 members of the Samson Cree Nation in Alberta will benefit from a substantial grant from the Canadian Internet Registration Authority (CIRA).

It was announced in late July that CIRA would be providing a total of $1.25 million in grants this year to support communities across the country that have a significant need for improved Internet access.

MTS has now been awarded an additional $100,000 in CIRA funding this year to not only improve service in Samson, but to expand and bring more reliable, high-speed connectivity to Ermineskin.

“Because it’s a blend of technologies, we can get them online fairly quickly, within a month,” said Derrick Houle, MTS’s CEO.

MTS officials said other plans tend to be costly with some only having speeds of five megabits per second. And often connections tend to be spotty at best.

With its grant money, MTS plans to provide speeds of up to 300 Mbps for the immediate future. And it anticipates increasing speeds in the future.

Chelsea Mills, who is a director with MTS, was not surprised to see her society once again be the recipient of some CIRA funding.

“I guess we had quite a bit of success with the 2019 grant,” Mills said. “(CIRA officials) seemed quite happy with what we did. And we thought we did great too.”

“The CIRA grant means we can continue expanding our infrastructure in the community,” Buffalo said. “The services provided by other ISP's in Maskwacis are not worth the high prices they are charging.”

Now MTS will be able to provide some more cost-effective Internet services.

Byron Holland, CIRA’s president and CEO, is looking forward to hearing the success stories that are anticipated following this year’s funding announcement.

“It’s inspiring to see communities across the country taking Internet access into their own hands,” Holland said. “More than ever, it is an essential service and CIRA is committed to help improve access for all.”

Holland was impressed with all of the applicants who were awarded funding.

“This year’s recipients all have great ideas to help their communities and we’re proud to support them,” he said.

A total of 14 projects across the country were funded by CIRA this year through its Community Investment Program.

CIRA has proved a total of $9.2 million for a total of 185 projects across the country since the program was launched in 2014.

CIRA is the national not-for-profit best known for managing the domain .ca

In 2021 CIRA’s community program focused in part on providing grants for Internet-related projects in Indigenous and rural communities as well those that benefited students.

The FNTC will co-create a digital roadmap for First Nations leaders in an effort to have their communities achieve digital equity in areas including connectivity and infrastructure, as well as tech and innovation leadership.

And the TNG is joining forces with other companies to hopefully implement a cellular and broadband network in its First Nation.

Long Lake will utilize its money on its communications connection and security project.

McMaster University’s project will see the creation of a pop-up learning hub in Six Nations. This centre, which will provide off-campus high-speed Internet and connections to student support staff, is not only for Indigenous students attending McMaster but also for those at Mohawk College in Hamilton and Six Nations Polytechnic in Brantford.

Saskatchewan’s lone funded project will benefit those in the primarily Métis village of Ile-a-la-Crosse with its digital literacy program.