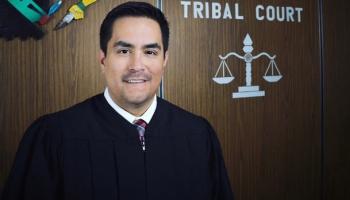 “For First Nations people, discrimination and mistreatment at the hands of law enforcement is common place. We are sick of being told systemic racism does not exist…” —Siksika Nation Councillor Samuel Crowfoot
By Shari Narine
Local Journalism Initiative Reporter
Windspeaker.com

An end of carding by police forces in Alberta was announced this afternoon by Minister of Justice and Solicitor General Kaycee Madu, but members of Indigenous and Black communities made it clear that words had to be followed by actions.

“First Nations people are sick of hearing empty words and promises. Show us this isn’t just a PR stunt and there is substance behind this change in policy,” said Siksika Nation Councillor Samuel Crowfoot.

“It is a step in the right direction, but we want it to be lasting, just not an announcement today,” said Kemoh Mansaray, board chair of the Africa Centre.

Police carding has long come under scrutiny for targeting Indigenous and Black people at a disproportionate rate. Carding is when people are stopped by the police for no particular offence to gather personal information.

Madu also announced that street checks, which he said served a strong policing purpose in preventing crime, would be carried out under new province-wide regulations. Police would be required to inform the public of their rights before the street check begins. He also said quarterly audits would be undertaken on the occurrences of street checks and reports sent to the government annually.

“By making this long overdue change, we are correcting a mistake from the past and ensuring we have a better future for all citizens in search of equal opportunities, protection and safety under the law,” said Madu.

He called the changes in police action “historic.”

Crowfoot, who was the first of the invited guests to speak after Madu’s announcement, called out Madu, the provincial government and the police for wanting to be thanked for “no longer violat(ing) our rights.”

Crowfoot, who was previously a lawyer in the United States and worked as prosecutor and judge, questioned the motivate behind the timing of the announcement.

“Is (it) a PR stunt designed at pre-emptive damage control, an attempt to avoid destruction of property, mass protest and violent public outrage the likes of which we have experienced in the U.S. over the deaths of people, such as Breonna Taylor and Eric Garner and George Floyd?” he said.

Those three people are Black and died at the hands of the police in the United States. Floyd’s died after an officer knelt on his neck. Floyd's death caused widespread outrage and demonstrations in both the U.S. and Canada and weeks of rioting in the U.S.

But Crowfoot also referenced injustices by police against Indigenous people in Canada.

In March, Athabasca Chipewyan First Nation Chief Allan Adam was tackled and punched in the face by the RCMP in a Fort McMurray parking lot. The incident began with an expired license plate on Adam’s truck and spiraled when he became agitated by the police treatment he and his wife were receiving. Charges were laid against Adam, but were dropped after video of the incident was made public

Chantel Moore is the First Nations woman in New Brunswick, who was shot by police in June. Police were carrying out a wellness check on her when she was killed.

Neil Stonechild died of hypothermia in 1990 after the Saskatoon Police Service picked him up and dropped him off in an abandoned field in minus 28-degree Celsius weather, a police tactic often referred to as a starlight tour.

Crowfoot also questioned why this attempt at reconciliation was coming five years after the Truth and Reconciliation Commission delivered its final report and delivered 94 Calls to Action, some of which included a focus on police interaction with the Indigenous population.

“Understand my intent is not to embarrass or shame anyone today for making steps in the right direction no matter the motivation. If it’s real change then yes, we welcome it, but please let it be real and let it be lasting,” said Crowfoot.

Madu said the practise of carding was to stop immediately, although the new rules would not be included in the police regulations until next year when amendments to the Police Act would also be carried out.