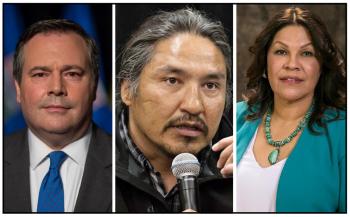 “I know that Kenney is not in a mood to impose more restrictions, which is really unfortunate. There’s so many people that are suffering and he needs to take it seriously.” — Assembly of First Nations Alberta Regional Chief Marlene Poitras
By Shari Narine
Windspeaker.com Contributor

Indigenous leaders in Alberta are saying its unfair that Premier Jason Kenney has linked the Indigenous population in the Regional Municipality of Wood Buffalo (RMWB) to the recent outbreak of COVID-19.

And they aren’t standing alone.

While Miller would not go into detail with Windspeaker.com about that conversation, he did say, First Nations are “really not responsible for the spread that’s going on. They’ve deployed so many exceptional measures to keep their people safe and it’s actually a good news story…. They’re really leading the way, so it’s really unfortunate they were singled out.”

The 11 Indigenous communities in the region backed RMWB’s declaration of a local state of emergency which was declared on Sunday. As of April 25, that region had the highest number of active cases per capita in the province. Fort McMurray, the largest centre in the regional municipality, had 1,064 active cases.

During his semi-regular weekly press conference, Kenney said on April 26, “The population up there (in RMWB) is disproportionately Indigenous. As you know we’ve had a much lower age eligibility for vaccination for that First Nations population, and we have done a lot of extra outreach efforts working with the First Nations to address vaccine hesitancy and to make it as convenient as possible in a culturally-sensitive way to deliver those vaccines.”

Chief Adam said Kenney is "putting them together. He’s saying it’s the Aboriginals’ fault for the outbreak here in Fort McMurray. It’s sad because of the measures that we put in place that protected our community for this long period of time.”

Some of those measures included setting up check points on access roads to First Nation communities to limit entry to residents and essential services and imposing curfews.

Adam says the blame for the spread of the disease lies with young oilsand workers who travel in and out of the RMWB; who do not declare if they are COVID-positive before they start their shifts; and who at this point are not eligible for vaccinations because they are younger than the provincial cut-off of 40 years of age.

Adam believes that the nine COVID-positive cases in the First Nations in the region are because members contracted the disease in Fort McMurray.

“That’s an alarming rate when they start coming back to the community with positive results. The spread becomes very concerning for us because if we start getting the virus and there’s no medical facilities to be put up or where they can go to, being refused medical attention, well then you can honestly say that we’re here to fight and fend for ourselves,” said Adam.

However, Adam says another early morning conversation Wednesday, this one with provincial ministers Tyler Shandro (Health) and Rick Wilson (Indigenous Relations) and Chief Medical Officer of Health Deena Hinshaw resulted in no commitment from the province for action.

Because of that, the 11 Indigenous communities late this afternoon instructed their citizens to pull their children from the Northland School Division. Adam said NSD told him that the division’s request to Education Minister Adriana LaGrange to move classes online had been denied. He also said that he has been assured by NSD that the children can continue to learn online.

The lack of movement by the province doesn’t surprise Assembly of First Nations Alberta Regional Chief Marlene Poitras, who called Kenney out for his statement and received no response from him.

“I know that Kenney is not in a mood to impose more restrictions, which is really unfortunate. There’s so many people that are suffering and he needs to take it seriously,” said Poitras.

As far as Adam is concerned the government is “putting profit over people.”

Adam says First Nations have asked Indigenous Services Canada to help with a mass roll out of vaccines in the region, as well as to establish a field hospital in Fort McMurray.

“It’s got to be a multi-pronged approach and we need, obviously, the province at the table,” said Miller.

In a tweet this afternoon, Shandro announced that Alberta will “redirect all doses of the Janssen vaccine, as supply allows” to RMWB and Banff. Banff’s per capita infection rate is second only to RMWB. Alberta is expected to receive about 30,000 doses soon. Shandro also tweeted the eligibility age for the Janssen and AstraZeneca will be lowered to 30-plus in these communities and the Moderna vaccine will be lowered to 30-plus in adjacent Indigenous communities.

The Janssen vaccine requires one dose only.