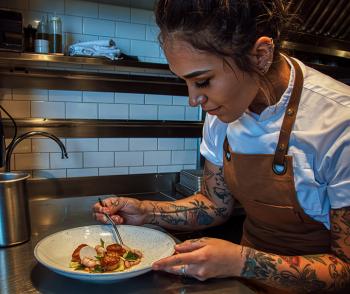 “We are trying to find people that are doing good things in the community or with sustainability. She's got a program where she's trying to give food to the people who don't have access to food; so, she's got a great meal program going.” — Nelson Borges, general manager at 1 Elgin restaurant
By Crystal St.Pierre
Local Journalism Initiative Reporter
Windspeaker.com

The National Arts Centre’s 1 Elgin Restaurant has announced its 2023 resident chef lineup with a focus on food sustainability.

The National Arts Centre (NAC), located in Ottawa, is a multi-disciplinary performing arts centre which creates, produces, and co-produces performing arts programming in various streams, including the NAC Orchestra, dance, English, French and Indigenous theatre, as well as popular music.

It also houses 1 Elgin Restaurant, which showcases another avenue for artists. Each year a group of residents are chosen to bring their art to the table.

Included on the list of residents for 2023 are chefs Charlotte Langley, La-toya Fagon, Carmen Ingham and Siobhan Detkavich.

Detkavich, a First Nations chef from the Cowichan Tribes, will be creating the 2023 fall menu for the restaurant and is excited to bring Tuscan Italian flavors to the table.

Since 2019, NAC has been creating space for Indigenous chefs during the time of Indigenous performances at the theater.

“They did an Indigenous chef in the fall, because the Indigenous theatre will also program very heavy in September, so we kind of compliment what they do with having artists, but culinary artists instead of theatrical artists,” explained Nelson Borges, general manager at 1 Elgin.

At 23 years of age, Detkavich has quite an extensive resume.

Detkavich began cooking in a Tuscan Italian restaurant at the age of 15. From there she spent time in various higher-end restaurants as the head chef, and in 2021 was the youngest female and first Indigenous competitor on the popular television series Top Chef Canada.

More recently she hosted her own television series, Dine Your Sign, and is working on a new series that will air in 2023.

“I’m taking my time to focus more on pushing myself into the television world,” she explained. “I also work alongside a not-for-profit and we are putting together a program where I will be a food educator. I’m actually taking a course to heighten my food knowledge.

“Obviously, because I am working in the culinary industry I understand food, but from a health perspective… I wanted to learn more about the nutrition side as I will be a food educator coming into Indigenous communities.”

This type of education and food sustainability is what drew Borges to approach Detkavich regarding the NAC resident position.

“We are trying to find people that are doing good things in the community or with sustainability,” explained Borges. “She's got a program where she's trying to give food to the people who don't have access to food; so, she's got a great meal program going.”

As part of the upcoming program, Detkavich said she will be bringing in various produce and other items to communities that usually wouldn’t have access to it or the knowledge of how to prepare it.

In the upcoming television series she will be holding cooking classes with teens from the communities to teach them about nutrition and provide skills.

“For me I’m able to go in there and be a food educator more or less,” she said. “I get to go in and have fun and do little programs where I get to cook with the teenagers… teach others the importance of healthier eating.”

Understanding what you are eating is a key focus of how Detkavich will develop her menu for her upcoming NAC residency.

“What I am hoping to do, I spent close to 10 years working in the fine dining industry, and I love it and it’s great. You learn a lot of culinary skills. For me, food is about telling a story, food is about bringing people together, and food is to bring comfort, she said. “I wanted to create a menu that is appealing from all angles.”

She said the food and ingredients will be recognizable to customers as she doesn’t want anyone to feel intimidated by her menu.

“I know the biggest thing is, when you’re reading a menu, if you don’t understand what it is, you are not necessarily likely to order that. So, it’s more of a rustic feel-good (menu) along the Tuscan lines. This is the first event that I am creating a full-fledged menu, not just a dinner menu, so I wanted to have fun with it a bit.”

Some of the features will include risotto, Neapolitan pizza and gnocchi.

“I just think it will just be an overall well-rounded experience for everybody,” Detkavich said.