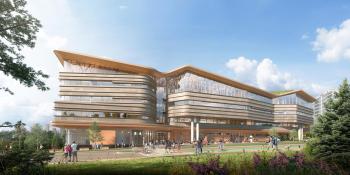 Ādisōke is the name of the future Ottawa Public Library and Library and Archives Canada facility as seen in this artist rendering.

“Ādisōke is the first Indigenous name to be given to a federal building…” — Anita Anand, the minister of Public Services and Procurement
By Sam Laskaris
Local Journalism Initiative Reporter
Windspeaker.com

It’s still a few years away from coming to fruition but a soon-to-be constructed public library in the nation’s capital now has an Anishinabemowin name.

At a press conference on Thursday it was announced that the name of a new joint facility for the Ottawa Public Library and Library and Archives Canada will be “Ādisōke”, which translates into “storytelling” in the English language.

Mariette Buckshot, the language and culture co-ordinator for the Kitigan Zibi Anishinabeg First Nation in Quebec, revealed the facility name at the press conference.

“Our language must be spoken and heard,” Buckshot said. “We care deeply about revitalization of our language and we are honored that this beautiful facility will have a name in our language.”

Representatives from Buckshot’s First Nation, as well as from the Algonquins of Pikwakanagan First Nation, were among those who helped decide the facility’s moniker. The two First Nations are part of the Anishinābe Algonquin Nation.

She praised the leadership teams of the Ottawa Public Library and Library and Archives Canada, as well as municipal and federal officials, for actively engaging with the Anishinābe Algonquin Nation while seeking a facility name.

“You have not only listened to us,” Tenasco said. “You have taken concrete action by naming this prestigious facility in a language that has been spoken on this land since time immemorial.”

Tenasco though said plenty more needs to be done.

“The Anishinābe Algonquin Nation is very concerned about language preservation and revitalization,” she said. “We are cognizant of the fact that we are losing some of our fluent speakers and that some of our communities do not have fluent speakers.”

Tenasco is hoping officials from the Ottawa Public Library and Library and Archives Canada continue to work alongside Nation reps.

“Please help us to revitalize and record our dialects,” Tenasco said. “Please support us in showing Ottawa and the world that we still exist. Please assist us in sharing our stories as we see fit.”

“I firmly believe that the new joint facility will be a place where we can meet in circle, tell stories, collaborate, learn, work and flourish,” she said. “Together we can create social change; a better Canada.”

Ottawa Mayor Jim Watson said the new facility is expected to be open in 2024. An official grand opening ceremony, however, is not scheduled to take place until 2025.

“It is a meaningful and fitting name for the distinctive facility developed in the spirit of relation building, active listening, decolonization and reconciliation,” Watson said. “And we are truly honoured to receive the name Ādisōke.”

Watson is also thrilled the nation’s capital will be getting a state-of-the-art library.

Getting a new facility is something he has been trying to secure for several years now. And it’s a goal he shared with Ottawa Centre MP Catherine McKenna, who is also the minister of Infrastructure and Communities.

Watson said he had discussions with McKenna prior to their last election runs. Watson is in his fourth mayoral term while McKenna, first elected in 2015, is in her second term as an MP. She has announced she is not running in the next federal election.

“One of the things we agreed on was that we wanted to ensure that what we had was a library befitting a G7 capital city,” Watson said. “We don’t really have that right now.”

The Ottawa Public Library currently has 33 branches. Its main facility is located on Metcalfe Street in the city’s downtown core.

“It’s served us well but it’s a bit of a bunker, I’ve said, and we’re replacing that with this beautiful new library that will be the envy of many cities around Canada and certainly around the world,” Watson said.

Watson anticipates it won’t just be those who live in Ottawa that will be venturing to the new facility.

“It will be one of these great buildings that people will want to come and visit many, many times, both residents as well as visitors,” he said.

Anita Anand, the minister of Public Services and Procurement, said she was thrilled she was able to sign the official document naming the new facility.

“Ādisōke is the first Indigenous name to be given to a federal building and it reflects the government of Canada’s commitment to engagement and reconciliation with First Nations, Inuit and Métis peoples,” Anand said.

Steven Guilbeault, the minister of Canadian Heritage, praised all those who have worked on the venture.

“I would like to commend all of the partners involved in this project for providing us with an example of empathy and action,” he said. “Your partnership, one forged in mutual respect and cemented with a true spirit of engagement and collaboration, should serve as a model for others. And it is a partnership that will continue when this magnificent facility is open to the public through planned programming and installations.”