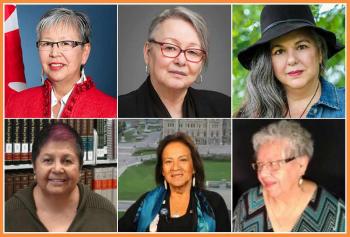 On April 17, the “Famous Six”, a group of Indigenous women working for equality under Canadian law for Indigenous women, their children and their grandchildren, will be celebrated at a special event in Ottawa.

“In 1985, when the Federal Government brought in the Charter, they realized they would have to amend the Indian Act, even though the court refused to accept it was sex discrimination, but it was amended to bring it in line with the Charter, especially Section 15 where it says you can't discriminate against someone based on race and sex,” Gehl explained.

In other words, the grandchildren of the original couple would be disenfranchised.

“Prior to this, the line went on forever as long as it followed the man's generations,” Gehl explained. “This new rule was applied to the men and their children born after 1985. With the women, they applied it retroactively, so the grandmothers like Jeannette Corbiere-Lavell who were disenfranchised got status, but her grandchildren who were born before 1985 still did not get it.

The struggle has been given the slogan “6(1)a All the Way,” referring to the pertinent section of the Indian Act. Currently, the clause pertaining to women is 6(1)c and bestows a lesser form of status.

The “Famous Six” have been advocating passionately for this change, going so far as taking it to court.

Senator Lilian Dyck has been affected by the issue and recognizes the need to get rid of it as a Senator, said Gehl, who also notes that while the “Famous Six” are alive and well, other women have come before them doing this work.

The event on April 17, which is also Equality Day which commemorates the Charter of Rights and Freedoms coming into force, is being supported by Senator Marilou McPhedran. Gehl describes her as “a real advocate for Indigenous woman standing behind the “6(1)a All The Way” request. She wants to honour the work we have been doing and to highlight that, despite all our work, here we are in 2018 with Bill S-3, which is a failed remedial legislation as it does not bring the Indian Act in line with the Charter.”

As for calling the group the “Famous Six,” Gehl said it’s a play on the Famous Five, who were women from Alberta who brought the Persons Case to the Supreme Court of Canada, which found that women in Canada had a right to be appointed to the Canadian Senate.

“It's a smart and clever title to call us the Famous Six, because the Famous Five has so much currency, even though there is some controversy about the history and who they were and some of the things they did.”

Gehl said that April 17 is going to be a very special day. “It's going to be exciting to have all six of us together. It could be potentially historically iconic. Yvonne Bedard, who took the issue to the Supreme Court in 1973, hasn't been in the spotlight much. It's going to be her 80th birthday so we will be celebrating that too.”

The event takes place from 5 to 7 p.m. in the Aboriginal Peoples Room at the Senate of Canada on Parliament Hill. It is open to the public, but one must register in advance here: https://www.eventbrite.com/e/famous-six-celebration-celebrons-les-celebres-six-tickets-44800108330