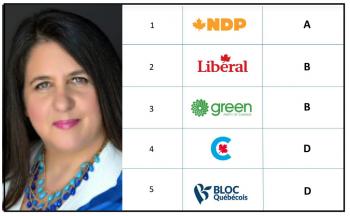 Lynne Groulx, CEO of the Native Women’s Association of Canada with the scorecard ratings.

“(The NDP) could find themselves in a position of power to influence and change legislation and make it more appealing to Canadians, and more favourable… I see them as a bridge builder.” — Lynne Groulx
By Shari Narine
Local Journalism Initiative Reporter
Windspeaker.com

If Erin O’Toole’s Conservatives form the next federal government, the Native Women’s Association of Canada says Indigenous women have a long, hard road ahead of them.

A scorecard released yesterday by NWAC ranks the platforms of the five main parties based on 11 priorities. The Conservatives received a failing grade of D.

“It is quite overwhelming,” said NWAC CEO Lynne Groulx. “But is this something new here, that it's hard for us to get the government moving on such systemic issues and longstanding issues? There is nothing new for us. Our past has always been quite monumental.”

She points to a lack of movement by any government on successive reports, including the Royal Commission on Aboriginal Peoples (1996), the Truth and Reconciliation Commission (TRC) on the legacy of the Indian residential school system in Canada (2015) and the National Inquiry into Missing and Murdered Indigenous Women and Girls (2019).

NWAC commissioned Nanos Research to compare the platforms of the parties based on 11 policy issues prioritized by NWAC:

The issues were rated on a scale of five and from that determination the scorecard was created.

The Conservatives scored ones—the lowest score—in environment and climate change, child welfare, and education because Indigenous peoples were not included in their platform on these topics.

In contrast, Justin Trudeau’s Liberals received a score of four in each of these three categories. Overall, the Liberals earned a grade of B.

However, Groulx points out that if she were ranking the Liberals on their actions—particularly on the priority of rights of Indigenous women and gender-diverse people—she would not give them a perfect score like Nanos did on this priority in the Liberals’ platform.

“(The) Liberals, in terms of their scores on MMIWG, their actual real score based on the work they've done, I wouldn't have given him that score because they were late in coming out with the action plan. The plan is not a plan; it's the pathways, and they're not fully funded. I heard the Prime Minister say it's fully funded and it's not fully funded,” said Groulx.

The New Democratic Party’s platform scored the highest, earning a grade of A. The party, led by Jagmeet Singh, received scores of fours and fives on every priority.

“I’m not so surprised because I've been watching from the beginning. We've been watching Mr. Singh and his statements and the thoughtfulness behind it and the analysis behind it,” said Groulx, who commends the party for including all 11 priorities outlined by NWAC in its platform.

As for the other two main parties, the Bloc Québécois earned a failing grade of D, while the Green Party scored a grade of B.

The Bloc scored ones in almost every category except in “self-determination and decision-making” where the party’s platform earned a perfect five. It committed on numerous occasions to abolish the Indian Act and to ensure the government applied the United Nations Declaration on the Rights of Indigenous Peoples and to enact all the TRC’s Calls to Action.

Groulx says the Bloc’s score is “disappointing” and shows that Indigenous women’s issues do not register in its priorities.

Should a minority government be formed, Groulx says the NDP could play a “critical role,” which would be advantageous for Indigenous women.

“They could find themselves in a position of power to influence and change legislation and make it more appealing to Canadians, and more favourable… I see them as a bridge builder,” said Groulx.

As for a majority government, Groulx is practical: “It has to be the right one and really that hasn't happened yet. There always seems to be something else. There's always another priority. There's always big promises, but the governments have not yet, we haven't seen that yet, really (stepped) up and say ‘This is our priority. We are going to end this genocide here’.”

She says she is hopeful that the “outpouring of realization” from Canadians since unmarked graves were uncovered on residential school sites by Tk’emlúps te Secwépemc and Cowessess First Nation will bring political pressure to bear on a new government to “really take things seriously and deal with the issues at hand once and for all.”

NWAC has been active in this election campaign.

At the end of August, the organization launched its “We’re done asking, we’re voting” campaign to get Indigenous women and gender-diverse people out to vote.

While it’s difficult at this point to gauge its success, Groulx says there has been more “conversations” going on social media.

“It’s true this is not our government; (it’s a) colonial government, but we have to look at the options here. If we don’t deal with the issues, if we don’t stand up and say, ‘We’re not going to take this anymore. We’re done waiting for the solutions,’ then we’re leaving the issue to be dealt with to the next generation. That’s not a good idea,” said Groulx.