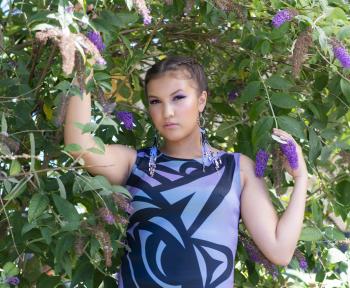 “Obviously the majority of sales come from being at events and doing our pop-up booths. So we were already online, but because we're such a newer company, we need to be out there…” — Sophia Seward-Good
By Julie Chadwick
Local Journalism Initiative Reporter
Windspeaker.com 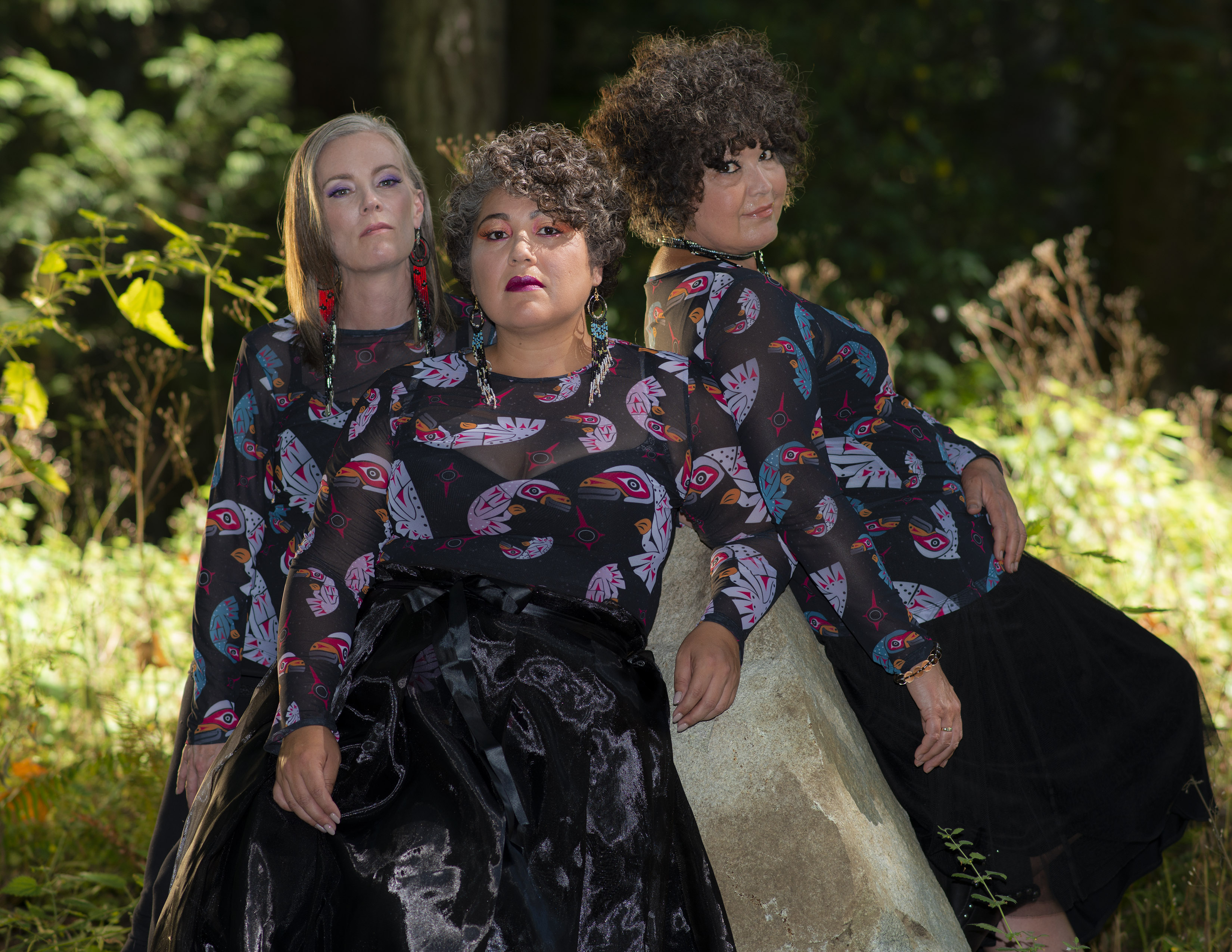 Struck earlier this year by the fallout from COVID-19, second generation Indigenous design house Ay Lelum struggled with how to market the latest designs from their Coast Salish clothing line.

Plans to debut their fall/winter collection Yuxwule’ Sul'sul'tun — Eagle Spindle Whorl this year at fashion events and sell their garments at markets all over North America, including in Santa Fe, Washington and Alaska, were cancelled or went online.

At this spring's Indigenous Fashion Week in Toronto, they were set to showcase on closing night, which featured the theme Tu Gh’el T’ilhn (Water Carriers). The event has now moved online and has been rescheduled for November.

Though devastated, sisters Aunalee Boyd-Good and Sophia Seward-Good decided to keep their company moving and roll with the changes. The problem was how to get the clothing out to consumers in a way that didn't involve the traditional route of in-person events.

The result was an innovative campaign that involved taking their multi-media approach to fashion and translating it into a creative photo and video launch for the line that debuted Sept. 12.

“Obviously the majority of sales come from being at events and doing our pop-up booths. So we were already online, but because we're such a newer company, we need to be out there. People really need to see and feel and try on the product. So that came to a halt but we were able to shift gears pretty easily, I think,” said Seward-Good.

“We already had it set up, but we just had to expand on that,” added Boyd-Good. “And then in looking at how to expand on that, we had our music ready, so we thought 'Let's do a fashion music launch video'. I don't know if anyone's ever done this before so it's kind of a new concept and we've had to figure it out as we go.”

The designs also feature killer whale and serpent designs by William and Joel as supernatural water figures. Spindle whorls — the tools traditionally used to spin wool for weaving — also feature in the artwork.

“We designed the collection around spindle whorls, as representing the women that weave life, that are water carriers, that are weaving and spinning in time and history,” said Boyd-Good. 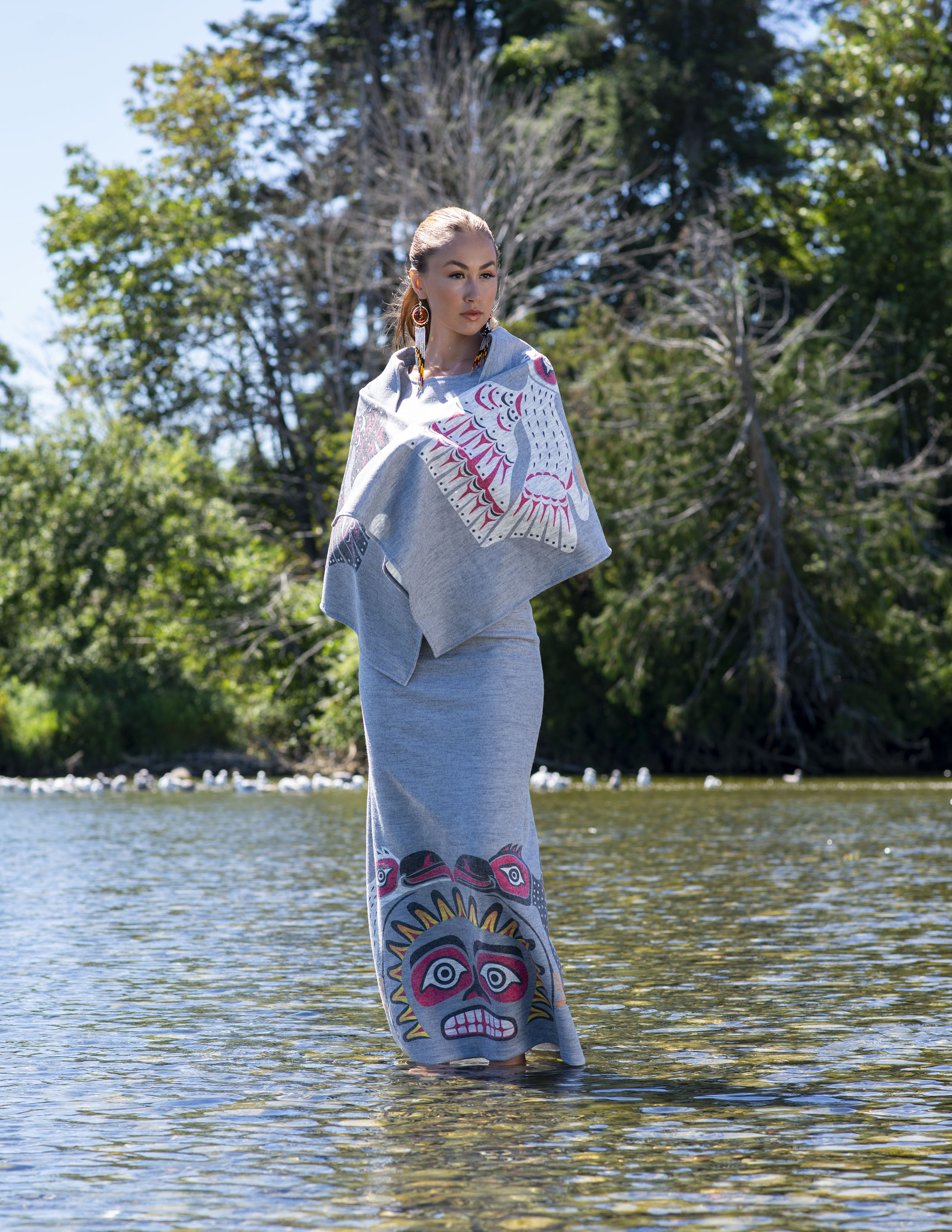 The sisters write music, often in collaboration with their father William Good, to accompany the garments as they are shown in a runway setting. The songs, art and language form the basis of the inspiration for the clothes. With the shows cancelled, the concept of a music video allowed the multimedia concept to remain intact, they say.

“The language and the art go one in one, because not everything translates into English, so we have to be able to showcase it in its true form,” said Seward-Good.

“That's why we wanted to do the video, so we could have the music showcased at the same time, because it's its own artistic entity,” adds Boyd-Good. “On the runway it's a little more chronological, so this is a different process.”

This season's clothing is made in part from recycled fabrics — TENCEL Modal, Dintex, mesh, bamboo, fleece — and feature outerwear for the first time.

Though the sisters are the primary designers, the company is a family affair that receives input from their mother and design mentor Sandra Moorhouse-Good, who ran a clothing line called Ay Ay Mut through the 1990s.

Their father William is credited with being a central force behind the resurgence of traditional arts and songs and brought back the Snuneymuxw style of carving from the brink of disappearing. These skills have been passed on to his son Joel, who also contributes his designs to Ay Lelum garments.

“It's next generation storytelling, how we're evolving and still able to incorporate our culture into the new age,” said Seward-Good.

To view the collection and the video, visit https://aylelum.com/