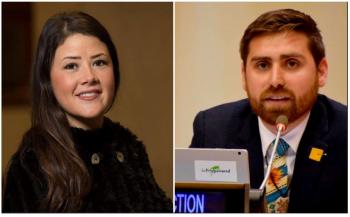 “While there are vulnerabilities that we cannot lose sight of… there’s also in that same vein so much leadership and so much innovation that we’re seeing being led, of course, by First Nations from coast to coast to coast.” — Kluane Adamek
By Sam Laskaris
Local Journalism Initiative Reporter
Windspeaker.com

Kluane Adamek, the Assembly of First Nations—Yukon regional chief, knows her territory is not only doing its best to combat climate change, it’s viewed as a leader in the fight. But she also knows that time is of the essence.

Adamek was one of the presenting panelists for a workshop titled Applying a First Nations Climate Lens to Canada’s post-COVID Economic Recovery.

The workshop was held at this year’s Cando Conference, a four-day event that wrapped up this past week. It was held virtually for the first time in the conference’s 27-year history because of the pandemic.

Cando is a national organization that promotes economic development in Indigenous communities throughout Canada.

Adamek is chair of the AFN’s Advisory Committee on Climate Change and the Environment.

Adamek said Canada’s climate has already warmed by 2.3 degrees Celsius and is expected to warm further at double the global rate.

And she believes the situation in the northern portions of the country are even more bleak.

“When we’re talking about the north, we’re like into triple overtime here,” she said.

Adamek said AFN—Yukon followed in the national organization’s footsteps and declared its own climate change emergency.

And the territory outlined its plans on how to deal with it.

For starters, a regional gathering, which attracted about 200 people, was held in Whitehorse this past February.

That gathering was the foundation for the Yukon First Nations Climate Vision and Action Plan (Strategy).

A pair of declarations were signed following this meeting, one involving First Nations’ governments in Yukon and one for youth.

Two weeks after the regional event, a national climate change summit, which attracted 390 participants, was also held in Whitehorse. That March gathering was held mere days before events across the country started to be cancelled due to the COVID-19 pandemic.

Graeme Reed, who is an AFN policy advisor, was also part of the climate change presentation at the Cando Conference. He said the world is currently facing multiple climate change crises.

The United Nations’ Intergovernmental Panel on Climate Change projects that there are less than 10 years to avoid locking in a future of catastrophic consequences.

And the Intergovernmental Science-Policy Platform on Biodiversity Ecosystem Services states a million species could become extinct in the next few decades, primarily because of the acceleration of climate change.

Like Adamek, Reed is concerned about the future of the country’s northern territories.

“The data suggests if the world kind of continues to advance on this current trajectory, we’re looking at anywhere from a six to nine degree (Celsius warmer) future for Canada and nine degrees in the north,” he said. “That’s pretty disruptive to put it kind of mildly.”

Reed said applying a First Nations climate lens was one of the concepts that came out of the Whitehorse national summit this year.

“We are looking at existing challenges and vulnerabilities and strengths and opportunities that First Nations bring,” he said.

Reed said the pandemic has resulted in looking at things a bit differently now.

“We want to be serious about leveraging the type of capital that was mobilized for the COVID pandemic towards also kind of imagining this future led by First Nations and led by clean and green technologies,” he said.

Though it has provided numerous hardships, Reed believes the pandemic could force many to change their ways of thinking about climate change as well.

“This is really that opportunity to kind of shift our thinking towards that more equitable, just and responsible future,” he said.

“While there are vulnerabilities that we cannot lose sight of or forget about or not acknowledge, there’s also in that same vein so much leadership and so much innovation that we’re seeing being led, of course, by First Nations from coast to coast to coast,” she said.

“And how do we support those nations to be positioned to advance knowledge systems and balancing that with, of course, whether that’s the economic priorities or some of the scientific research and analysis.”