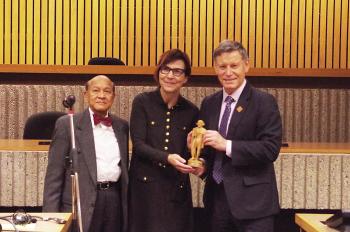 “I think, far too often, Canada has been good about passing judgement about social justice around the world while hiding it at home.” —Cindy Blackstock
By Marjorie Roden

Robson Hall at the University of Manitoba saw the Mahatma Gandhi Centre of Canada present the Peace Award to Dr. Cindy Blackstock, an advocate for First Nations children across Canada through her years of work.

Blackstock is a member of the Gitskan First Nation with 25 years of experience with social work, specifically dealing with child protection, and is currently a professor at McGill University in the School of Social Work in Montreal. She is also the executive director of the First Nations Child and Family Caring Society of Canada.

During the awards ceremony on Oct. 11, Blackstock was introduced by Dr. K. Dakshinamurti.

“Today, we are honouring Dr. Cindy Blackstock for her incredible work on behalf of Aboriginal and children’s rights communities culminating in a landmark decision of the Canadian Human Rights Tribunal according to the Jordan’s Principle,” he said.

“Her advocacy is informed by her rich understanding of Indigenous theory and ways of understanding the world and a culturally-based and evidence-informed analysis of structural inequalities affecting First Nations children, youth, and families,” said Dr. Karen Busby from the University of Manitoba Faculty of Law.

The Gandhi Centre promotes peace and encourages non-violent action based on Gandhian principles through education, public awareness, collaboration, and building intercultural understanding. Blackstock’s work to raise awareness of Canada’s unfair treatment of children, especially when it comes to their medical care, is something that included historical documentation and research of an unsung Canadian hero who inspired her work.

“Let’s get to Canada’s experience and some of the ancestors we have to recognize in our story, because I think, far too often, Canada has been good about passing judgement about social justice around the world while hiding it at home,” said Dr. Blackstock during her acceptance speech and slide show.

Dr. Bryce had been the chief medical officer for Indian Affairs. And for the advocacy work he did at the age of 51, he was all but erased from Canadian history books for speaking out about the lack of quality health care for the First Nations children who were being “cared” for in the residential schools.

“He went out and documented the death rates of the children in the schools,” said Blackstock.

“He found that they were dying at a rate of 25 per cent per year, and if he followed the children over three years, almost half of them would have passed away. And in Five Hills Residential School, which was the only one that kept full records, 76 per cent of their children were dead by the age of 16.

“Now, what did Doctor Bryce notice? He noticed that the funding the government was giving to the population in Ottawa alone was three times higher than to all First Nations people across the country. He said ‘Even that out, and actually implement a bunch of practical reforms like not putting sick children in with healthy children, making sure the schools were well ventilated, do all those things and you could save many of these children’s lives.’ The cost to the government of Canada would have been 10 to 15 thousand dollars, in a time when the government’s budget was over $100 million. The government said ‘No, we’re not going to do it’.”

She said Dr. Bryce had sworn an oath to people’s health and could not morally remain silent.

“So his report gets leaked to the major papers.” His work appeared in Ottawa Citizen, then called the Evening Citizen, and in the Globe and the Victoria Columnist in the west.

“As you can see, editors thought it was important too, because they put it right on the front page of the paper above the fold… That’s what people of the period back then thought about this. It wasn’t just immoral. It was probably illegal, and yet it was not enough to get the conscience of the nation to get people of the period, people just like us, to rise up and stop this inequality from happening.

“I would argue that the Canadian Human Rights tribunal decision would have not been needed to be argued had someone embraced the basic tenets of what Dr. Bryce was arguing. He said, ‘Every human being has the entitlement to equal treatment and dignity in the provision of public services’,” said Blackstock.

After the presentation ceremony was done, when asked about how she felt about receiving the Mahatma Gandhi Peace Award, Blackstock responded, “To even have my name in the same sentence as Mahatma Gandhi is a huge honour, one which I have to spend the rest of my life living up to.

“Also, I think this is a collective honour. It isn’t just me. A lot of people dating back many years, in fact centuries, have been fighting for the right thing for Indigenous children, and so this award is shared with them. It is a part of what they contributed to. They are my inspiration, and so are the children and the young people in the families today. They are what keep me going.”

When asked about being a role model for others, such as many of the law students who were present for the ceremony, Dr. Blackstock laughed. “That means I have to behave myself!”

She added, “I think I’m just one person who decided they wanted to try and do something right, and I think it shows us how we can all do that in our own way, and make a difference. Many, many people are... Seeing people of all diversities standing up and saying ‘You know what? I’m going to do something about this!’ And they do, and they make a difference!”