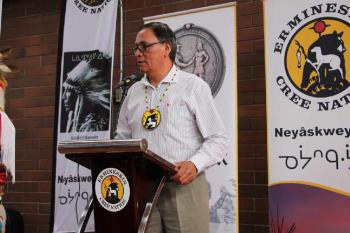 It’s time for First Nations to return to the historical relationship set out with the Crown in the Royal Proclamation of 1763, and that means bypassing federal departments and talking directly to the Governor General.

At the Assembly of First Nations’ annual general assembly at the end of July, chiefs passed a strongly-worded resolution to “support the initiative to pursue Treaty-based arrangements, including yearly reporting to the Governor General on the state of the treaty relationship, as a mechanism to implement the relationships in the spirit and intent of the Treaties.”

Ermineskin First Nation Chief Craig Mackinaw seconded the resolution. The resolution contends that despite Prime Minister Justin Trudeau’s promise in 2015 to create a better fiscal relationship “the bureaucrats have not wanted to let go of the funds and continue to unilaterally control the process…” It’s further alleged that the departments are using the monies allocated by Treasury Board as a “weapon against Indians and violating the Treaties.”

In addition to the overt bureaucratic control is a complaint about the 10-year grant funding for First Nations coming from Indigenous Services Canada. The 10-year grant is an approach jointly developed by the department and officials of the AFN. The grant allows First Nations with good governance and financial practises to better manage their transfer payments from the federal government over a longer period of time.

“The way some of us look at it, it’s heading us towards being a municipality and after 10 years you don’t know if your 10-year grant will still be going on. There’s a lot of uncertainty,” said Mackinaw.

As well, states the resolution, the 10-year grant “does not fulfill treaty obligations or respect the treaty relationship.”

The resolution calls for a fiscal relationship to be established directly with the Treasury Board and the Department of Finance, noting that Treasury Board allocations “should fulfill the legal obligations of the treaties, but do not.”

“The Treasury Board is kind of the key player in all of this,” said Mackinaw. “If we work with the Governor General and the Treasury Board we could have that one-on-one relationship like when treaty first was signed.”

“Hopefully by doing this we will get more understanding and more funding in the end. But it’s going to be a long process either way,” he said.

No discussions have occurred on the topic with either federal Indigenous department, the Treasury Board or the Governor General. Mackinaw is hoping those talks can get underway in the next couple of months.