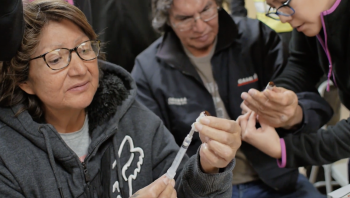 A scene from the feature documentary Kímmapiiyipitssini: The Meaning of Empathy by filmmaker Elle-Maija Tailfeathers.

“I would learn that drum dancing was once common in Labrador communities, but due to centuries of colonization, the drums fell silent.” —filmmaker Ossie Michelin
By Sam Laskaris
Local Journalism Initiative Reporter
Windspeaker.com

A pair of Indigenous filmmakers will have their latest works shown at the Calgary International Film Festival which begins today, Sept. 23.

A feature documentary titled, Kímmapiiyipitssini: The Meaning of Empathy, was made by Elle-Maija Tailfeathers, a member of Kainai Nation (Blood Tribe) in southern Alberta. The film, which will make its Alberta premiere, discusses substance use and the overdose epidemic in Tailfeathers’ First Nation.

Also in the festival is Evan’s Drum, a 14-minute short from Montreal-based Inuk filmmaker Ossie Michelin. It focuses on a seven-year-old boy named Evan, and his mother, who share a passion for Inuit drum dancing. The family lives in Happy Valley-Goose Bay, located in central Labrador.

The Calgary festival continues until Oct. 3.

Kímmapiiyipitssini: The Meaning of Empathy will have its in-person screening on Sept. 25.

The following day, until the end of the festival, it will be available for on-demand viewing at home, but only to Alberta, Saskatchewan and Manitoba audiences.

The film can be rented here:

Evan’s Drum will have its in-person screening on Thursday (Sept. 23) as part of the Positive Vibration programme, which includes 10 short films.

Also, starting on Thursday, on-demand viewing for Positive Vibration can be purchased, again, only for Alberta, Saskatchewan and Manitoba viewers.

Kímmapiiyipitssini is a powerful film about drug use in Kainai Nation.

Tailfeathers is granted intimate access to many users in her First Nation who detail their stories.

Numerous frontline workers, include Dr. Esther Tailfeathers (Elle-Maija’s mother), are among those in the film trying to assist those suffering from addiction.

Tailfeathers’ film focuses on the significant changes those at Kainai Nation are trying to make, including striving for harm reduction instead of utilizing orthodox recovery methods.

In a filmmaker’s statement promoting Kímmapiiyipitssini: The Meaning of Empathy, Tailfeathers said more than 2,000 people from British Columbia and Alberta died in 2020 from fentanyl overdoses.

A disproportionate number of those deaths were Indigenous people.

Tailfeathers believes radical changes are required to help drug users, including those from her First Nation.

“For decades, Indigenous communities have accepted that abstinence-based treatment models, such as 12-step programs, are the golden standard for treating addiction,” she said. “However, the drug-poisoning crisis has revealed that abstinence isn’t a realistic, or even a humane, expectation for those addicted to substances like fentanyl.

“As the death toll continues to rise, many Indigenous communities have been forced to question our longstanding relationship with the abstinence-based model. Despite the fact that evidence-based studies prove that harm reduction saves lives, many communities were not and still are not willing to adopt harm-reduction practices.”

The Kainai are one of the Nations that make up the Blackfoot Confederacy. Kímmapiiyipitssin is a Blackfoot teaching which means compassion.

Tailfeathers explains that during the fentanyl crisis in her First Nation, community leaders and addiction specialists discovered traditional treatment methods like abstinence were not working effectively. Many lives were still being lost.

“Somewhat reluctantly, those on the frontlines began to implement radical alternatives rooted in harm reduction and witnessed a dramatic shift within the community,” she said.

Tailfeathers said she felt a duty to make a film, which is 125 minutes long, about the changes in her First Nation.

“It is how our ancestors survived genocide and it is how we, as a community, will survive this crisis,” she said. “Kímmapiiyipitssini is our harm reduction. As a filmmaker and a community member, I felt an urgency and a responsibility to document these radical changes and also honour the lives of those lost to this crisis.”

As for Evan’s Drum, in his film statement, Michelin, who grew up in the Labrador town of North West River, said he did not know what Inuit drum dancing looked like or sounded like as a youth.

“It wasn’t until I was a young adult in the early 2000s that the drums returned and I heard them for the first time,” he said. “Later, I would learn that drum dancing was once common in Labrador communities, but due to centuries of colonization, the drums fell silent.”

Michelin said he had been told drum dancing would return Inuit pride to their culture.

“This is what drew me to the story of drum dancing, because it’s about more than just beautiful movements and music, or even a revitalized tradition: drum dancing is an embodiment of Inuit pride,” he said.

“When you see the drummers pick up their drums and start performing, you see this transformation in their body language and in their faces as they light up with joy.”