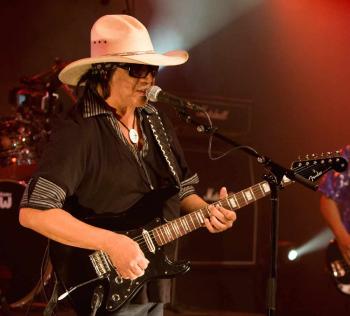 Anyone who knows the blues will know the name Billy Joe Green.

An icon of the Canadian music scene, the Winnipeg-based musician started playing guitar, and touring as a professional musician, years before his son Jesse Green was born in 1973.

But it wasn’t until Jesse grew into a man and started putting out his own music that Billy Joe finally began thinking about laying down some tracks of his own.

“My first CD “Roughin’ It” was released in 1996. It was after my son Jesse – who was in a band at that time called Peacemaker – released his CD that his poppa even got near a studio.

It was a wake-up call of huge proportions,” said Green, looking back on a constant music career that he describes as “a runaway horse.”

Others might define it as admirable, not to mention successful, with 2017 marking Billy Joe’s 50th year as a professional musician. Over the decades he released eight albums, was nominated for three JUNO Awards, won two Aboriginal People’s Choice Music Awards, and took home the Western Canadian Music Award for Best Aboriginal Recording in 2001.

Not bad for an artist who never intentionally set out to become one.

“My Dad was a country singer, not famous or anything like that, although he should have been. He strummed chords with his thumb on his big fat Stella guitar, and would get me hoppin' or would lull me to sleep when night fell on our one-room Indian hillbilly cabin on Lake of the Woods,” recalled Green.

“My eldest brother Richie took to it and was real good. My hands were still too small, though, and I didn't get the full fever until I was 13.”

Four years later, at the age of 17, Billy Joe started playing professionally when he was offered a spot playing second guitar in a band called the Feathermen. They became the house band at the Indian and Métis Friendship Centre on Princess Street, and occasionally got asked to do ‘Rez’ shows, hockey tournaments, and powwow gigs.

They even played for Pierre Trudeau on one of his trips to Winnipeg, and Green still has his autograph kicking around somewhere.

“When I asked him for his autograph,” Trudeau told me ‘I should be getting your autograph’,” said Green. “I really should find his autograph and Ebay that thing someday.”

Back then, Green was painfully shy and didn’t have the nerve to talk to anyone, especially girls. Looking back on it now, it might be what kept him out of trouble. Rather than getting caught up in chasing women, he turned his attention to playing live shows, learning his craft and becoming a solid musician. His diligence would lead to playing music professionally for the next 50 years.

And he’s not done yet.

This year, Green toured his latest album “Fender Bender”, released on Americuse Empire/STRONGFRONT.tv Records, a label run by son Jesse. The single “Just to Get Close to You” reached the #1 spot on the National Aboriginal Music Countdown.

“It’s wonderful to know that the hard work is still being appreciated,” said Green.

Green and his colleagues have witnessed a lot of changes over the years, including how music is consumed.

“Everything's digital now. Ipods and such are taking over, and free downloads are taking dollars from the artist. Even those zillionaire musicians are complaining about it. Myself, I still sell CDs off stage, which pays for my gas to get to the next gig. As long as that's in place, I'm still in business.”

The other big change Green has witnessed is that a lot of venue owners don’t seem to care about live music—or musicians—anymore.

“Musician wages have never been huge, but back in the day a good club owner would run up on stage and shake all the musicians’ hands and ask the crowd for extra applause for the good playing they've done. That doesn’t happen these days.”

At the end of the day, though, and the start of every new one, it’s the chance to play music in front of people who love it that keeps Billy Joe Green plugging away, and plugging in.

“The promise of an appreciative audience is the biggest thing that keeps me motivated. The challenge of mustering up the energy to do another show is also huge. After getting past the first tune on a big show–it's like riding a bicycle. You don’t forget how. It's getting on the bike that's usually the first hurdle.”

For Billy Joe Green, what’s most fulfilling about being a musician is the people he encounters, including the ladies he was once too shy to approach.

“All those beautiful sisters I get to meet and say hi to, that’s the best part! I'd be lying if that wasn't in my answer somewhere!”

“Seriously, though, the most satisfying thing is the Billy Joe Green fan base that seems to remain in place, for one reason or another, especially in Alberta of all places.”

Of course it’s not as easy these days for Green to keep rocking the stages. The older he gets, the more he has to pay attention to taking good care of himself.

“Staying physically and spiritually healthy has been a recent issue. I’m way over the hill in many people’s estimation, but I simply refuse to let those particular folks have that satisfaction. Physical exercise and diet is paramount. I’m gonna get started tomorrow!” he jokes.

“I play my guitar every day, sometimes twice. I also bang on the piano; not to be a pianist but to stay musically sharp. I dabble on drums and percussion just to fine tune the rhythmic flirtations required to make music playful and fun.”

His music has evolved over the years, too, with each phase of life reflected in the songs written at that particular time.

“I used to write about good love gone bad, like “Nightmare Blues”, “Don’t Ask Me”, “Hard Hearted Woman”. Songs like that.

“One of my favourite songs, “Rock & Roll Bug”, hits home pretty hard. It speaks to the devotion a musician must have in making the lifelong commitment to the craft of making music, including the disappointments, the feeling of being alone in a world of indifference, feeling like an outcast and not quite fitting in,” he said.

“Then, just as suddenly, the triumphs happen. Those awesome feelings you get when your song moves someone and they chase you down for a CD and an autograph. And when those moments are over, you head home and start the artistic process all over again.

“It’s a good habit if your head’s on straight.”

These days, Billy Joe Green finds himself writing about the things that mean the most to him.

“I’ve expanded my turf to write about community, love of family, and the love for the music itself. Today I’m inspired by a good clean and sober life with all its promises and rewards. I’m inspired by my beautiful children, their mom, all their cousins, and now my grandchildren, a boy three years old, and a baby girl, just a few months old.”

Judging from Green’s track record, and the music that courses through the veins of his family’s blood, there’s a good chance that one day one of his own grandchildren might pursue a career in music, too. For tomorrow’s musician, Billy Joe has these words of advice:

“Make music a healthy hobby, and train to be a plumber. They make just as much or even more dollars than a doctor!

“If you do pick up the challenge, though, be prepared. Hard, hard work at your craft is the ticket. If you think you’re gonna make a market with a half-measured stake, you’re in for a big body slam with big hurt.

“Versatility is a must. Take some music lessons. Work and apprentice with successful artists if you can. Don't get strung up by the booze and drugs. It’s a dead-end street. And get a good lawyer if you hit it big – and that's a long shot, man.

“In the words of one of my favourite songs by Tom T. Hall: ‘Son, you better put that ol' guitar away, there ain't no money in it and it'll lead you to an early grave’."

(RoseAnna Schick is an entertainment writer and travel columnist. You can reach her at rascreative@yahoo.ca).